Turkish women fight for their rights (now that nothing protects them) 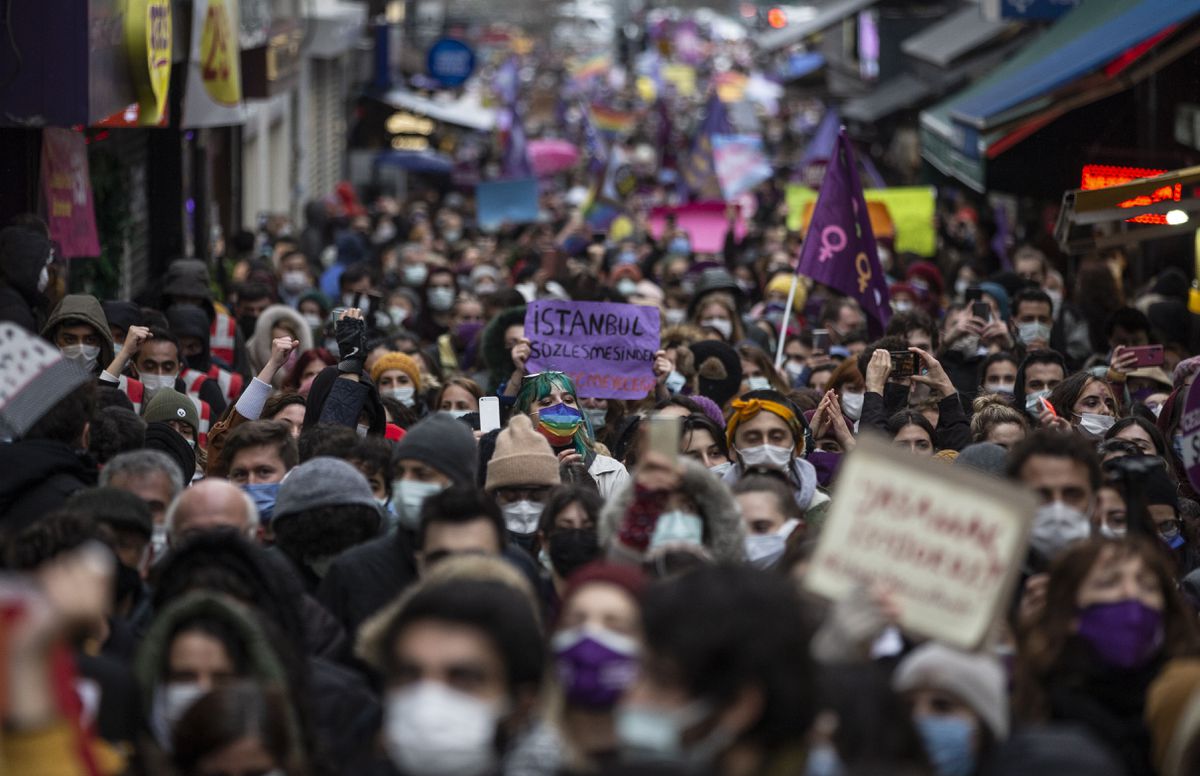 Mustafa Murat Ayhan confessed in early August to raping, killing and dismembering Azra Gülendam Haytaoglu, a 21-year-old journalism student. A few days later, Ümitcan Uygun, the main suspect in the murder of his previous partner in 2020, was arrested on the charge of deliberate murder of Esra Hankulu. These men have once again put Turkey in front of the problem of violence against women and the impunity that surrounds it. And Turkish women, once again, have demanded in the streets the country’s re-entry into the Istanbul Convention, which it officially abandoned on July 1. The exit was the latest in a long list of attacks against their rights that they have been resisting for years.

“It was a safety net for us,” Elif Ege and Selime Büyükgöze, volunteers from Mor Çatı, an organization created in Istanbul in 1990. They report by email that this legally binding treaty is a crucial instrument when local measures are not enough and the system blocks progress. “At this point, we believe that the decision to exit the agreement discourages women from resorting to these mechanisms and paves the way for violence.”

In July 2020, the government had already flirted with the idea of ​​abandoning it, but had to back down under pressure from public opinion. Less than a year later, on March 20, 2021, at midnight and without making noise, the president, Recep Tayyip Erdogan, signed the decree that annulled its ratification. This movement was interpreted as a gesture towards the more Islamist currents that saw in the agreement an attack against the traditional family and a promotion of homosexuality.

More than 100 organizations, political parties and citizens presented demands before the Council of State against the exit. “In our petitions we emphasize that this decision is manifestly unconstitutional. And we demand the immediate stay of the execution because otherwise it will cause irreparable damage to the lives of millions of women, ”says Ezel Buse Sönmezocak, from the organization Women for Women’s Human Rights, in operation since 1993.

A day before the departure materialized, the body ruled in favor of its execution, by three to two, with respect to one of the requests. The rest of the cases are pending. If the feminist movements previously had to fight for it to be applied, now they are fighting to recover it. “Our legal fight continues in all fields. At the same time, this is not just a legal issue, it is a very political issue, “says Melek Önder, a spokesperson for the platform, through a messaging application. We will stop Femicides.

Erdogan presented his own plan that, he said, would make the fight against sexist violence even stronger. “Moving away from the universal norm and law means depriving ourselves of the most important covenant that currently protects us from violence in the world. The Istanbul Convention is the one that will keep women alive. Therefore, it cannot be replaced, ”adds Önder.

The organization Stop Feminicides has counted around 2,000 sexist attacks in the last five years

Almost four out of 10 Turkish women who have had a partner have suffered physical or sexual violence at least once, according to a 2015 study that collects UN Women. The Government does not publish statistics on sexist murders, but according to the data collected by Pararemos los Feminicides, there have been around 2,000 in the last five years. In 2020, they recorded 300 and 171 suspicious deaths. The Umut Foundation, for its part, counted 527 attacks against women, of which 373 were fatal.

The system fails women before and after. Ayse Tuba Arslan, for example, filed 23 complaints of threats and insults, which were referred to the conciliation office, before being murdered by her ex-husband in 2019. HK’s attacker, Egen and Büyükgöze also report, was arrested only when she , brutally attacked, was in a critical situation. The judge reduced his sentence by alleging unfair provocation and good behavior during the trial. “The biggest problem in criminal cases related to violence against women in Turkey is impunity,” they say. Sönmezocak, referring to low conviction rates, agrees.

The recent arrest of Uygun has put this issue back on the table. He was also the main investigator in the murder of his previous partner, Aleyna Çakir, in June 2020: there were images of abuse, he was the last person he was with and she had his DNA under her nails. But when he entered jail last January, where he spent six months, he did so for incitement to drug use.

“In general, women’s rights have been a systematic target of the AKP regime. [Partido de la Justicia y el Desarrollo] since 2010 ”, points out Sönmezocak. In 2011, the same year that the country signed the Istanbul Convention, Erdogan assured that the opposition exaggerated sexist violence and the Ministry of Women and Family was replaced by the Ministry of Family and Social Policies. “Omitting ‘woman’ from the name of the ministry was not just a symbolic gesture, but a strong signal that the government gave priority to family-oriented policies,” they point out in Mor Çatı. “Social policies regarding women were reduced to charity, instead of rights.”

A year later, they put abortion at the center of the bullseye. The president called it murder and assured that no one should have the right to allow it. “Different members of the AKP, such as the Minister of Health, the chairman of the Parliament’s Human Rights Commission and others followed that line, stating that abortion is murder and that the life of the fetus is more important than that of the woman or her parents. elections, ”recalls Sönmezocak.

Making women’s rights prevail is not the priority of an executive who openly rejects gender parity. “You cannot put women and men in equal positions,” Erdogan said in 2014, “it is against nature.” On another occasion, he described as “deficient” and “incomplete” those who did not have children. The president’s sayings and deeds have been trying to relegate them to home and motherhood for years.

“The most concrete version of this approach was the one experienced in May 2016, with the Report of the Divorce Commission, as it is known ”, say Egen and Büyükgöze. “It included conciliation in cases of divorce, putting the ‘family unit’ above the lives of women in cases of violence, seeking the incorporation of the criterion of ‘consent’ in sexual acts with minors and the possibility of marriage between the victim and the perpetrator in case of abuse ”, they add.

“Given that violence against women occurs mostly in the family, it is true that the government tolerates this violence to prevent separations,” says Sönmezocak. “For example, the Government began to provide psychological assistance (sic) to women seeking divorce. In this assistance they are told to think twice about the result ”.

In recent years, ultra-conservative groups have questioned and attacked other tools such as Law 6284, which is the basis, together with the Istanbul Convention, of mechanisms against sexist violence, and organizations fear that the exit will give rise to similar decisions. Regarding the consequences that are noted, Sönmezocak points out that the absence of official data does not allow knowing the exact situation. However, independent organizations and lawyers have observed, for example, problems in police stations. “In fact, it has been confirmed by the Minister of Family herself. He said that it is true that there was ‘confusion’ about the application of Law 6284 on the ground ”, he assures.

The Turkish feminist movement, which has faced attacks time and again, does not give up. “We have no hope of overturning the decision, but as independent women’s and feminist organizations we continue our struggle every day on the ground,” they say in Mor Çatı. “Women and feminists in Turkey are still very angry and in every content we create and in every protest we organize we will keep saying that we will not give up on the deal,” says Sönmezocak.