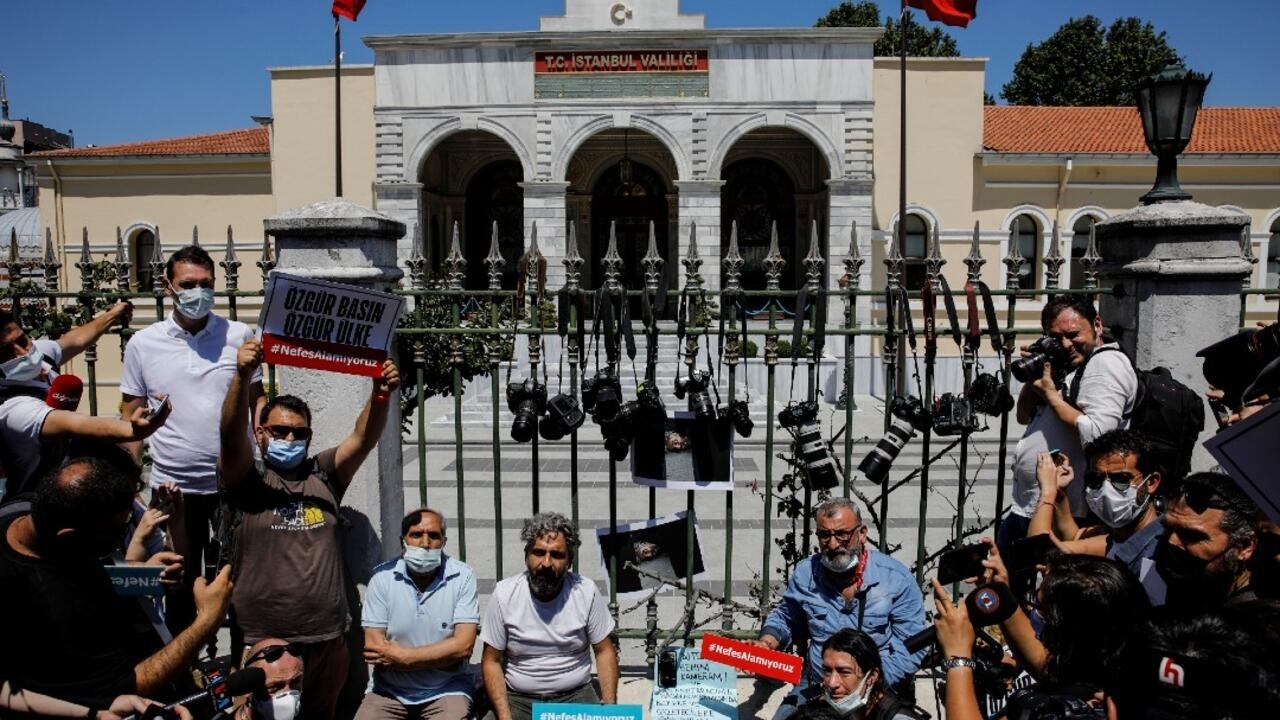 Hundreds of journalists protested this Tuesday in the cities of Istanbul and Ankara to demand freedom in the performance of their work, after on June 26 the photojournalist Bülent Kiliç of Agence France Presse was subjected to a “violent arrest”, as cataloged the same communicator, by the Police.

The arrest that lit the fuse of the protests occurred on June 26, when the France Presse Agency photojournalist was thrown to the floor, in what Kiliç himself denounced was a “violent arrest” by the Turkish authorities.

In Ankara, several communicators protested by hanging their cameras on the fence of the Government Palace. Other protesters chanted several slogans, among which “they won’t let us breathe”, alluding to the famous phrase denouncing the death – at the hands of a policeman – of African American George Floyd.

“When a journalist is beaten, why is there no support? I always ask myself this,” said photojournalist Bülent Kılıç, present at the protests in Istanbul.

Turkish reporters say their job has become more difficult since April, when police issued a circular banning the dissemination of images or audio of officers without their consent.

“Our colleagues face violence just for doing their job,” said the head of the Turkish Journalists Association in Anakara, Esra Kocak Mayda.

“The Turkish authorities must investigate the police personnel who were involved in the arrest of photojournalist Kiliç and the violence to which he was subjected,” added Gulnoza Said, European and Central Asian coordinator of the Committee to Protect Journalists (CPJ).

Kiliç, a renowned Turkish photojournalist, was arrested while covering the LGBTIQ + pride march in Istanbul. While the reporter was documenting the arrest of some participants in the march, four policemen hit him with their cameras and pushed him to the ground, pressing, immobilizing him with their knees and preventing him from breathing.

After being transferred to a police station for questioning, the photojournalist was released without charge. Kiliç proceeded to file a claim for the violent arrest. According to CPJ, the Istanbul Police issued a statement regretting that a journalist was among those arrested and reported launching an investigation. At least 46 people were arrested in the march.

Kiliç mentioned in an interview to the Turkish agency Anka that the policeman who detained him had asked him to identify himself, however, the agent immediately began with the arrest, something for which the police superiors would have apologized, according to the journalist told the press agency.

There is concern from organizations that ensure freedom of expression in Turkey due to the multiple attacks on this right in recent years in the country. Reporters Without Borders describes the risk of paying prison sentences as “an ever-present risk for Turkish journalists“.

In 2016, a failed coup attempt sparked a series of arrests of Turkish journalists and the shutdown of several local outlets.