Turkey and other countries that decided to change their name 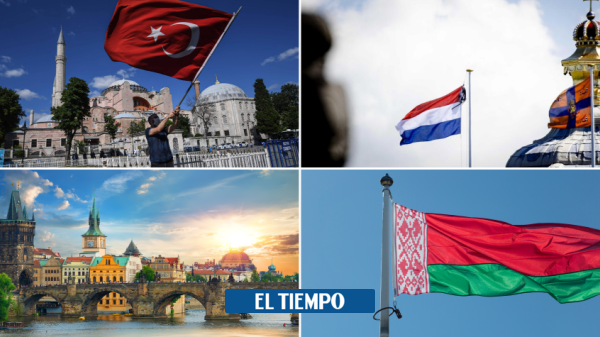 Few days ago, The United Nations made official the request made by Turkey to change its international name. The country will go from being recognized as Turkey, in English, to Türkiye, a name written in the national language.

Why? According to several local media reports, Turkey in English means Turkey and in dialect it means useless or unsuccessful. With the new name, Turkey aspires to give a representation to its culture and values.

(Also read: Why does Turkey change its name? The UN makes it official internationally)

However, Turkey is not the only country that has decided to make an adjustment or change to its original name. These are other nations that made the same decision in the past.

According to ‘National Geographic’, this nation was remembered touristically by the name of its largest provinces: South and North Holland (or South and North).

And why the change? On the one hand, the authorities wanted the country to be recognized by a label that covered its entire territory and not just two provinces. But there was also a question of image and brand that motivated the change of name at an international level.

(You may be interested in: The countries in which you can work with a Colombian ID)

According to the German newspaper ‘DW’, the authorities sought to distance tourists from the image that had been recorded to date, in which factors such as recreational drugs or legal prostitution came to light.

“It was time to modernize. A clear international logo is a positive point for exports and to attract investors and talent”, said the then Minister of Foreign Trade, Igrid Kaag, according to the newspaper ‘El Clarín’.

(Also: These are the countries that have implemented the four-day workweek)

The Republic of Macedonia was renamed North Macedonia in 2019. According to ‘CNN’, the country opted for its previous name when it became independent from Yugoslavia in 1991.

However, the election gave way to strong confrontations with Greece, which has a region of the same name. Macedonia, the Greek region, is in fact the place where its second largest city is located.

The clashes led to Greece blocking Macedonia’s accession to NATO and the European Union. According to the Greeks, the dispute over the name had to be resolved before giving way to the entry of that country into both organizations.

(You can read: Canada: common professions and trades that are well paid in this country)

Surely you are still talking about the Czech Republic, without knowing that the country is now called Czechia.

It was a brand issue. According to ‘CNN’, the authorities of that country sought to find a shorter name that was easy to pronounce and remember.

Panoramic view of Prague, in the Czech Republic.

The Foreign Ministry said at the time: “Our hope is that this measure will solve the problems we face with the distortion of the name”.

According to ‘DW’, it was considered that “just as the French Republic was known as France, the Czech Republic should be called Czechia, an easier name, moreover, to attach to the products manufactured there”.

The UN calls this country as Czechia since 2016.

(Also: The ‘bottomless pit’ where divers have died trying to unravel its mystery)

‘National Geographic’ recalls that during the period of British rule this country used to be called Ceylon. With the arrival of its independence, the nation wanted to recover one of its old names.

When this nation severed its ties with the United Kingdom in 1972, it began using the name Sri Lanka. A step that became fully official only until 2011.

Kandy, a city in Sri Lanka.

Another place that made the same determination to abandon its colonial past was the kingdom of Swaziland. According to ‘DW’, this country, located in southern Africa, was renamed Eswatini.

The decision was made by the monarch Mswati III in 2018, according to the ‘BBC’. The measure was made official during the celebration of her 50th birthday, which coincided with the commemoration of half a century of independence from the British.

But it has not been just the countries. Other cities like New York or Paris have also undergone name changes.

Paris, for example, in the past was called Lutetia, while New York was called New Amsterdam.

Poveglia: this is the story of the ‘world’s most haunted’ island

Blanche Monnier, the young woman who lasted 25 years kidnapped by her family