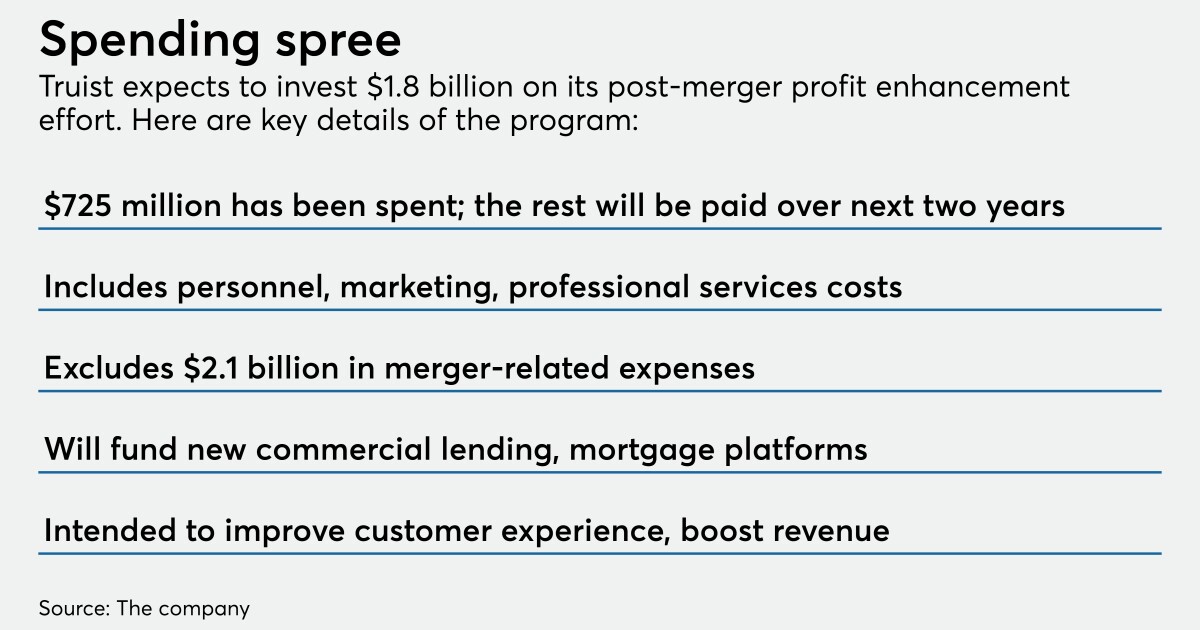 Truist Financial in Charlotte, N.C., has provided its first estimate — $1.8 billion — of how much it’s spending on initiatives to strengthen profits over the long term.

The $509 billion-asset company, formed by the December 2019 merger of BB&T and SunTrust Banks, has already incurred about $725 million of those expenses, leaving nearly $1.1 billion to be spent over the next two years. Those costs are on top of $2.1 billion in merger-related expenses tied to things such as severance and systems conversions.

“We are investing more than what we originally thought, but we think these are the right investments … all for the right reasons,” Daryl Bible, Truist’s chief financial officer, said Thursday during a conference call to discuss quarterly results.

Those investments include the creation of new delivery systems for commercial loans and mortgages, with executives making the argument that the upgrades will create better client experiences and will lead to more loan applications.

Truist executives fielded several questions about the $1.8 billion figure, and John Pancari, an analyst at Evercore, wrote in a note to clients that the amount “appears higher than expected.”

“We’re making a lot of investments in the company as we are moving forward, and you’re seeing it in the results,” Bible said in response to one question about the planned expenditures. “Look at our revenues. Look at the account growth that we’re getting. We’re doing really, really well in the midst of a lot of conversions.”

The company reported some positive signs on credit quality. Loans operating under some form of payment relief such as deferrals fell by 42% to $4 billion. About 97% of the commercial clients and 91% of consumers that exited relief programs have paid off their balances or are current with their loans.

However, Truist said the amount of student loans that are 90 days past due nearly doubled to $1.1 billion. The company said it plans to sell a $1 billion portfolio of small loans.

The company continued to forge ahead with its three-year integration plan, closing 104 branches and cutting 1,300 jobs in the fourth quarter. A pilot program for its digital platform is set to begin in the second quarter.

Executives said they plan to close about 800 branches as part of the merger integration, including 226 this quarter. Truist’s workforce has shrunk by 8% since the deal was announced in early 2019.

The company held firm to its goal to cut $1.6 billion in annual expenses by late 2022, with about $1 billion of those cuts achieved over the next four quarters.

“Most of the hard work will be done by the end of this year,” Kelly King, Truist’s chairman and CEO, said during the call.

“I fully expect by the time we head towards the fall and end of the year you’re going to be really surprised in terms of how robust this economy is,” King said.

“That will show up in terms of commercial loan activity in a very big way,” he added. “You’ll likely to see more residential loan growth than we would have expected in a slower economy. And, certainly, you will see it in terms of insurance activity as well.”

Fires A housing fire broke out in Munkkivuori, Helsinki, and one person was hospitalized

Hamdan bin Mohammed: We are making a new history for the region and the world