Transport stoppage: the police evicted roadblocks, but they say the measure continues indefinitely 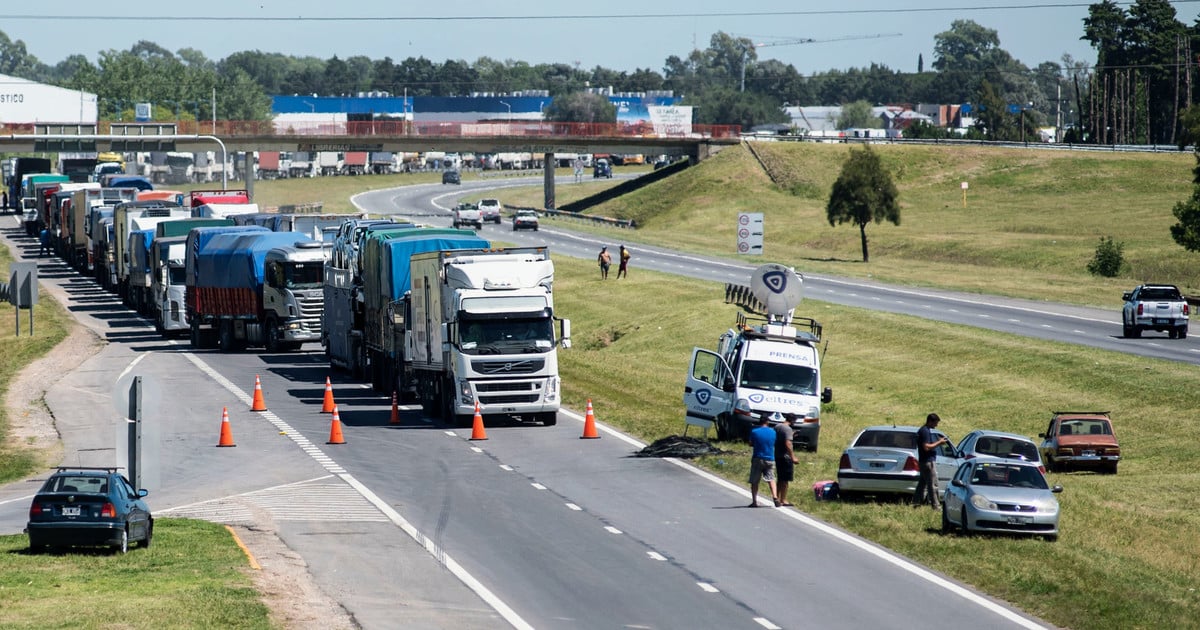 The indefinite strike launched by the United Carriers of Argentina (TUDA), which caused cuts in routes of Buenos Aires, Santa Fe, Córdoba and Entre Ríos and generates problems for the supply of inputs and raw materials, it was ratified even when some pickets were cleared by the police.

By Thursday afternoon the roads in Santa Fe were completely cleared after a intervention of the Ministry of Provincial Security, that ordered different operations to remove the protesters from the routes. Among other measures, those who carried out the protests were identified and the Justice was notified.

“This is the line of action that we will follow before roadblocks by groups without union representation,” warned the area minister, Marcelo Sain. The Chamber of the Oil Industry (CIARA) and the Cereal Export Center (CEC), among others, supported the actions led by the Santa Fe government to free the roads.

The last two points that remained with restrictions for cargo transit, in the towns of Rufino and Josefina, were released this Thursday.

Santiago Carlucci, TUDA reference and one of the promoters of the strike, assured Clarion that on different routes from Santa Fe and Córdoba were “Repressed” and that they were evicted without a court order.

However, he clarified that in Buenos Aires, Entre Ríos and Chaco, even in some parts of Córdoba, they maintain the protest that prevents the circulation of trucks. “The measure continues indefinitely. We are studying new strategies, ”said Carlucci, who did not rule out returning with cuts in places where they were forced to withdraw.

The Minister of Government of Santa Fe, Roberto Sukerman, said that if necessary, the police will intervene again and that no more road and highway cuts will be allowed.

“We have to be forceful. There is a firm decision of the Government of the province that these cuts are not carried out. They are transporters or self-employed workers who must carry out their claims where appropriate, but not by cutting off the routes ”, stated the official.

The Argentine Industrial Union and the Grain Exchanges of Buenos Aires, Rosario, Córdoba, Entre Ríos and Santa Fe, among other entities, expressed in recent days their concern that the strike “generates economic damage that affects all links in the chain agroindustrial and put at risk the supply for internal consumption and processing, as well as the entry of thousands of trucks that cannot access the export ports ”.

“That is why we ask the national authorities, the Justice and the provincial governments to agree to arbitrate the necessary measures aimed at quickly recovering the free movement of cargo transport, urgently,” they indicated in a joint statement, launched on Wednesday, the Grain and Trade Exchanges.

The automotive industry was one of those affected. The Fiat and Renault factories stopped production due to the lack of inputs caused, according to the complaint, by the TUDA strike. The same panorama was described from the Chamber of Steel.

The modality of unemployment prevented the passage of trucks with crops and grains, but not private vehicles, ambulances, transportation of perishable or medical supplies.

“This is a group of autoconvocados. Nobody knows who they are. The problem is that there is a group of people who took the routes on their own and decide who are those who travel and who are not, ”the president of the Federation of Collectors, Fernando Rivara, complained in dialogue with Radio Dos.

The national and provincial governments maintain that TUDA is not an entity with union representation, so they refuse to listen to their demands. “The nation does not recognize us, but after two or three days of protest they already say that we generate shortages and that the plants are stopped due to the strike. They do not receive us. And when we protest, they repress us, ”Carlucci complained.

Freight transport businessmen, where there are about two thousand self-convened, point out that the rise in logistics costs – among others they include fuel, tolls, technical inspections and driving permits – have become a combo that will lead to bankruptcy. of the sector.

From TUDA they indicate that the increases in recent months have doubled and that this cost should be transferred to the rate and, consequently, to the consumer. That is why they demand that the Government enable a dialogue channel that allows finding alternatives. The minimum rate, they specify, should be 85 pesos per kilometer.

Skiing “They didn’t stay on their feet at all,” Kaarlo Johansson recalls homemade hips – in the past, however, they were of the best quality and qualified for the World Cup star.