Tragedy in Mexico: the balance of victims after riots in the stadium 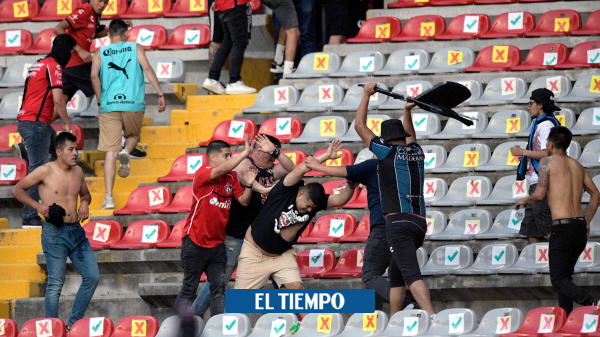 After a worrying outbreak of violence broke out this Saturday night at the La Corregidora stadium in Querétaro (Mexico), during the match between the ‘Gallos Blancos’ of Querétaro and the ‘Zorros’ of Atlas, for the ninth day of the Clausura tournament of Mexican soccer, the governor of the state of Querétaro, Mauricio Kuri, offered a press conference this Sunday to announce the official part of what happened.

(It may interest you: ‘Cucho’ Hernández scored a great goal with a tremendous Chilean: see his genius here).

The businessman and politician from the National Action Party (PAN) assured that those implicated in the crimes of ‘attempted homicide’ will be investigated and ‘violence at sporting events’. The Querétaro Prosecutor’s Office, according to what he said, is already working on the case. In addition, he delivered the official balance of wounded after the riots.

According to Kuri, this is the casualty count:

– Three people in serious condition.
As reported, there are no deaths so far.

“It is not an attack against a team or some baristas. It is an attack against Querétaro, our way of life and values. I have no words to condemn the violence and abuse that was seen this Saturday”Kuri said at his press conference.

The governor of Querétaro did not announce any punctual punishment in his speech. In turn, he said that he summoned the executive president of Liga MX, Mikel Arriola, the president of Querétaro’s “Gallos”, Gabriel Solares, and Yon de Luisa, president of the Mexican Football Federation, to evaluate what happened. .

“I recognize that the state of public force was insufficient and did not act with the promptness that was required”he pointed.

“I have given 7 precise instructions to determine responsibilities, by action or omission. We will punish what has to be punished. We will correct what has to be corrected and we will sanction who has to be sanctioned”.

I have issued 7 precise instructions to determine responsibilities, by action or omission.

We will punish what needs to be punished.

We will correct what has to be corrected and we will sanction whoever has to be sanctioned.

– Nairo Quintana, seen by his DT: “We always thought he was going to respond”

– Carlos Bilardo found out about Maradona’s death: that’s how it was and that’s how he reacted

– Luis Díaz, speed and technique: to admire his tremendous play

The season has begun for Sevilla, a campaign in which the Andalusians hope to take another leap and get closer...

Protest against the Ukraine war: Can the West remain passive?