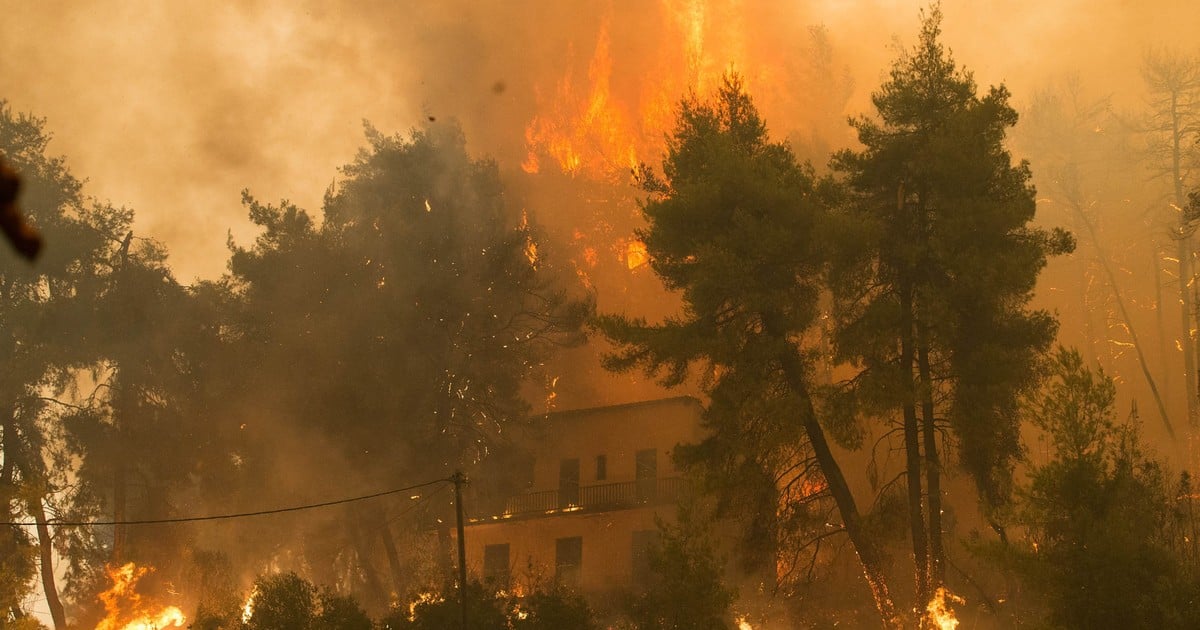 Thousands of evacuations and hectares burned, destroyed houses and several fatalities, is the balance of the devastating fires that these days have started especially in the countries of the Eastern Mediterranean and that threaten to continue due to the heat wave foreseen this week.

Today Greece It is the worst country in this wave of fires which now ravage the Greek island of Euboea, while in Italy the Sicily region has declared a state of emergency and in Turkey firefighters are fighting the five outbreaks that remain active.

This scenario it can recur or even get worse, taking into account the conclusions of the report presented today by the UN Intergovernmental Panel on Climate Change (IPCC).

The document warns that temperatures will rise throughout Europe at a higher rate to changes in the global average temperature, which will cause, among other things, an increase in floods, droughts, heat waves and fires.

View of the huge fire that plagues the town of Kalamos in Attica, Greece. Photo DPA

In the seven days that Greece has been burning, at least 65,000 hectares have been burned in what has been the greatest ecological catastrophe in the country, according to the National Observatory of Athens.

Firefighters continue to fight the fire on the island of Euboea, where the flames have surrounded several towns and the evacuations continue, while the other fronts in the country seem delimited.

During the night, residents of various villages they had to be evacuated again from the beaches on ferries and Navy ships.

Although many houses have been destroyed, so far urban centers have been saved, also thanks to the titanic fight of the inhabitants themselves who reinforced the firefighters.

The Sicily region has declared a state of emergency due to the fires, while central and southern Italy are on alert for the heat wave expected this week, accompanied by strong winds.

Only during the weekend have they been counted up to 50 fires in Sicily, in the province of Palermo.

The flames also continue to spread in the province of Reggio Calabria, in the Calabria region (south) and threatens the area of ​​the “Ancient Forests” of the Aspromonte National Park, recently included in the Unesco heritage.

In Molise (center) a fire also threatens the town of Campomarino, where 400 people had to be evacuated.

After twelve consecutive days of arduous firefighting, Turkey has achieved reduce the number to five of active outbreaks in two provinces, the Habertürk newspaper reported on Monday.

In Mentese, Mugla province, two forest workers were injured, one of them serious, when a tree fell on them.

And in the province of Antalya, on the Mediterranean coast, all the fires that caused seven of the eight fatalities in the country.

In Albania, where fires have claimed a person’s life and devastated thousands of hectares of forests, the situation has improved, although some dangerous foci are still active in the south and north of the country.

The most critical case It is the one on the Karaburun peninsula and near the Dukat village, on the Ionian coast, south of the resort town of Vlora, local media report.

The flames, active for 15 days, They have razed entire areas of secular forests and are approaching the Llogara Pine National Park, considered one of the main lungs of the southwest of the country.

Another problematic active front is in the bush above the Kalimash tunnel, part of the road linking the capital Tirana with neighboring Kosovo, where the flames are out of control and are closing in on the villages in the area.

Got it: “Russell exalts himself under pressure, others collapse” | FormulaPassion.it