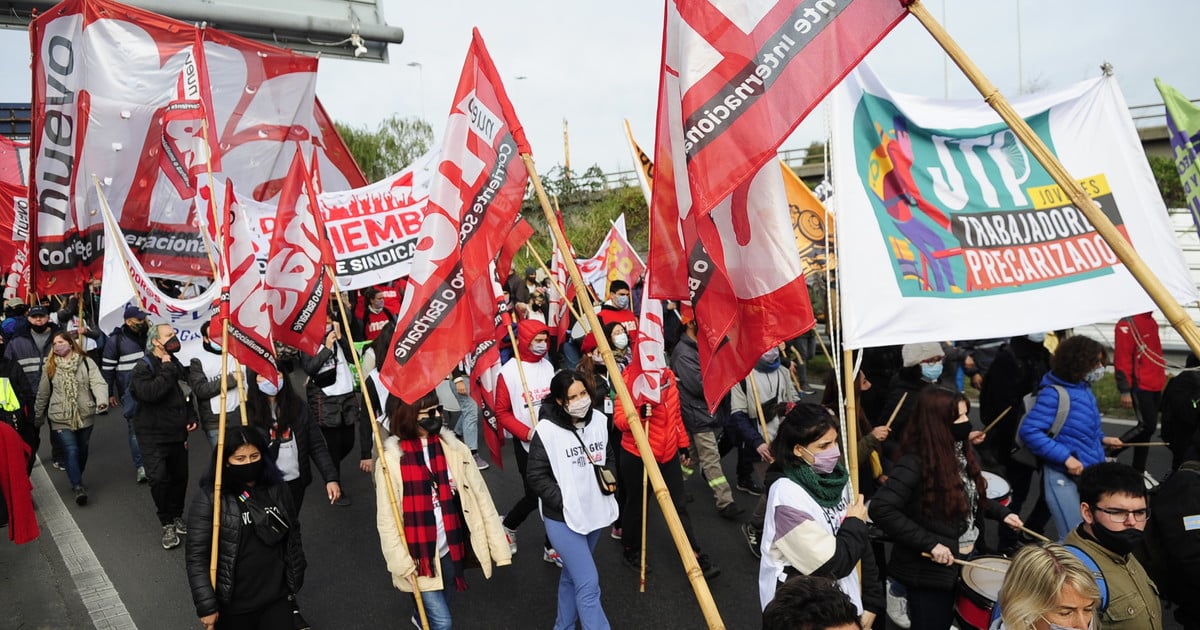 Other impossible journey to travel through downtown Buenos Aires, through a series of demonstrations of leftist movements, fired workers and teachers.

Before noon, protesters began arriving at the Obelisk to march to May Plaza in claim of “vaccines, wages and work”.

Within the framework of this day of protests, around 7:30 a.m. they experienced moments of tension and incidents when part of these protesters tried to climb the Pueyrredón Bridge to enter the City of Buenos Aires.

Another impossible day to travel in the center of Buenos Aires. Photo: Luciano Thieberger.

“Salaries are well below the family basket. Everything continues to increase and job insecurity grows in all areas,” said the protesters, surrounded by a wide deployment of security forces.

Around 11 in the morning, the groups managed to cross the Pueyrredón Bridge on foot and, with flags and drums, marched to downtown Buenos Aires, causing traffic chaos on 9 de Julio Avenue. A similar postcard was seen on Montes de Oca avenue and also on Leandro N. Alem avenue, where protesters positioned themselves on the offices of the Ministry of Labor.

From 1 pm, the members of the combative trade unionism and other “sectors in struggle” march to the Plaza de Mayo, where they carry out an act requesting “increased salaries, vaccines and work.”

“This action in unity and at the center of political power is very positive. We go to the Plaza because the debt is with the people, the salary is not enough and poverty continues to grow. It is no more: the social and health crisis is added the scandalous erasure of the CGT and CTA bureaucracy, submitted to the government, “said Alejandro Bodart, from the MST-FIT-Unit who will participate in the march.

The protest is organized by the Movimiento Barrios de Pie-Libres del Sur, the Polo Obrero, the Teresa Vive Movement, MTR-Resistir and the FOL, among other political and social organizations.

Also participating are dismissed workers from various outsourced companies, including EMA and ArgenCobra, from Edesur; railroads from MCM, Líderes and Comahue, railroads from the Roca, Aerolineas, Latam, Just and Polymont lines.

As reported in a press release, the workers were fired from their posts despite being essential “to be able to make all the repairs to the electrical service.” “They were forced to work during the entire pandemic and when they demanded the transfer to a permanent plant they were illegally fired,” they indicated.

Celeste Fierro, national leader of the MST-FIT Unidad, warned that they are protesting because “the economic situation is very serious.” “Salaries are well below the family basket, it continues to increase,” he questioned.