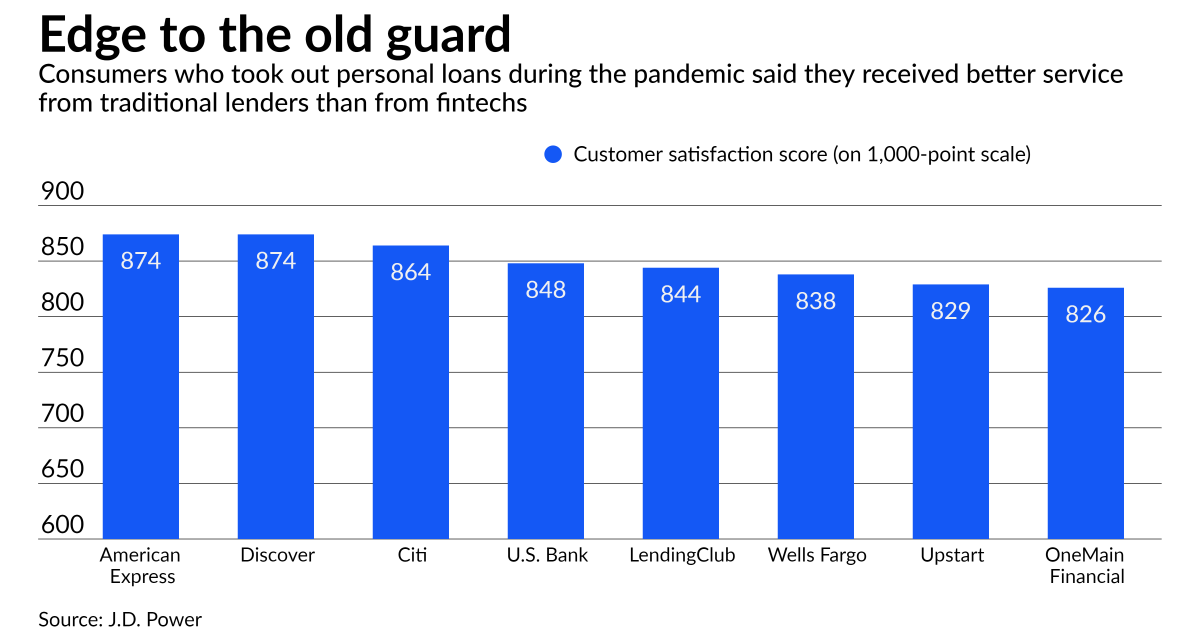 While digital channels were crucial for consumers during the COVID-19 pandemic, a slick app alone didn’t cut it for many borrowers.

Traditional banks outperformed fintech lenders on customer satisfaction and trust in a recent JD Power study of personal loan borrowers. While the fintechs’ scores declined slightly from their level prior to the pandemic, banks and credit card lenders received higher customer satisfaction marks.

“Those traditional lenders tended to create a better experience during COVID,” said Jim Houston, managing director of consumer lending and automotive finance intelligence at JD Power. “During the pandemic, the traditional lenders still had built into their processes a little bit more of a high touch. They’re still using email, phones, and those types of activities, whereas fintechs have moved to everything being done electronically. “

Fintech lenders have enjoyed strong growth over the last decade, promising faster turnaround times and user-friendly digital experiences. Many consumers have turned to online lenders to refinance their credit-card debt or pay for home improvements.

To be sure, consumers ranked easy-to-use websites and mobile apps high among their priorities in JD Power’s study of 2,457 personal loan customers, which was conducted between December 2020 and February 2021. But many consumers also gave traditional lenders high marks in those areas.

American Express and Discover Financial Services tied for the highest score in the study, each earning 874 points out of 1,000. Citigroup ranked third with a score of 864. Lending Club and Upstart, two publicly traded online lenders, earned scores below the segment average of 858.

One reason that traditional lenders may have fared better: The pandemic forced many consumers who would not otherwise have used digital channels to make the switch. Consumers who were accustomed to relying on branches or phone calls, and needed some hand-holding in changing old habits, were seemingly more likely to turn to a bank than an online lender.

Borrowers felt that the technology offered by more established lenders was on par with what the fintechs were offering, the study found.

“The pandemic forced consumers to go down the electronic path and in general, traditional lenders had a higher level of trust from a brand perspective,” Houston said.