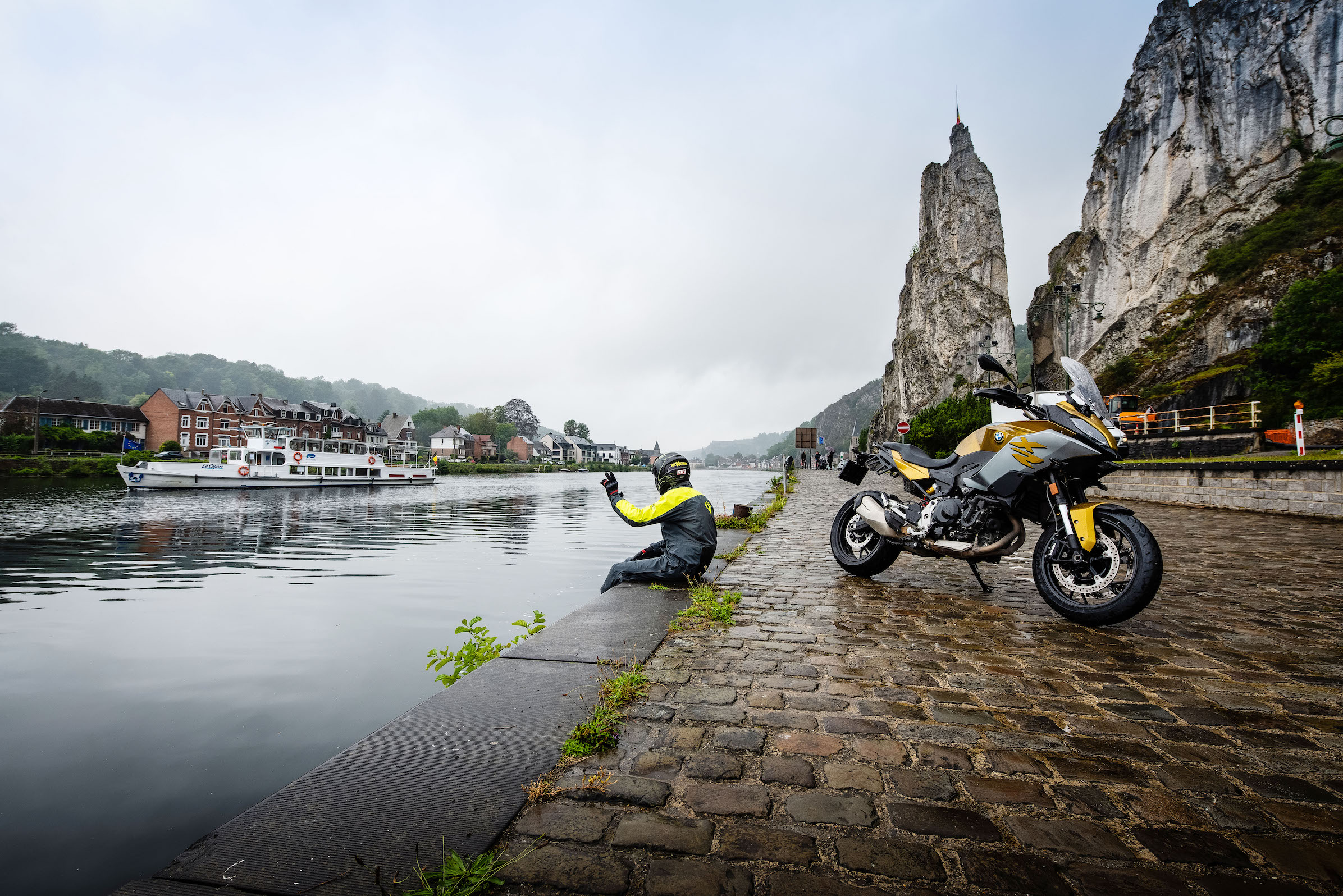 We recently posted a video on these pages in which four-time world champion and Olympic kayaker Maxime Richard took on freestyle motocross rider Gilles Dejong over a course on and along the Lesse. But did you know that Maxime is also an avid motorcyclist? A while ago we dived into his slipstream for a round of the Namur Ardennes, a 210 km long ride that starts and ends at the Citadel of Dinant. You can download the route at the bottom of the article.

We start with a wonderfully winding part of Max’s training route along the Meuse, until we cross the river in Hastière-Lavaux and set course for Beauraing. Just before the village, in Baronville, we exchange the rather quietly babbling N40 for the better winding roads. As if the weather gods had foreseen that we would be focusing on waterways today, the heavens open mercilessly until I turn into Rue de la Circuit in Gedinne. I splash around the illustrious circuit before aiming the prow south, tapping the French border and deepening the dowsing rod: we continue our search for water. And we think so. In Membre we collide with the Semois, which we will use as a guideline via Vresse in the direction of Alle. From the valley, we climb to the majestic view point of Rochehaut, from where the Semois is entangled in the depths around Frahan.

A challenging detour via Corbion takes you in a bushy seesaw to Bouillon, where history and conviviality merge around the Semois. After a visit to the castle we change course to the north for the way back. But don’t worry, because when you turn right at Noirefontaine from the main road, the pièce de résistance awaits. If the road to Dohan is already a spicy foretaste, then the part N865 from Dohan towards Mortehan is a piece of asphalt to lick your thumbs and fingers. A succession of fast and slightly more technical corners over perfect and fairly recent asphalt.

The way back between Palisseul and Daverdisse then meanders wonderfully along the Lesse; although the tarmac is of slightly lower quality, and you have to watch out for some unexpected hairpins and ditto crossing game. And especially at dusk. A forewarned motorcyclist… If you manage to avoid the local ‘sangliers’, the final climb from the Houyet valley is a great finish. And before you know it you’ll see the Rocher Beyard in Dinant looming again. A tough, but rewarding ride!

Cave La Merveilleuse: Just outside the center of Dinant you will find the Grotte La Merveilleuse: a cave discovered in 1904, which is considered one of the most beautiful in Europe. Under the rock layers you will find stalactites, stalagmites and waterfalls, one already finer and whiter than the other. A guided tour costs 10 euros per person and takes about 50 minutes.

Circuit Gedinne: A circuit of 5,063 meters long and 7.20 meters wide on average. 22 turns and one chicane. The recipe for success that has been attracting motorcycle enthusiasts from all over the globe to the usually sleepy Gedinne for decades for the crème de la crème of (classic) racing. The course is completely on the public road, so you can also taste it yourself (provided the speed is adjusted).

Panorama Rochehaut: Why not have a cup of coffee on one of the highest points in the region, which is quite rightly classified as a Walloon heritage? From the sidewalk next to our route you can enjoy a dazzling view over the lower Frahan, the slate quarries Les Corbeaux, and a nature reserve for bats. In every corner of this village there is a walking route to Frahan. Recommended.

The castle of Bouillon: Its importance and status have waned considerably since the Middle Ages, but it still has an impressive mouth: the castle of Bouillon, or the personal home of Godfried de Bouillon. The fact that he left his battlements at the end of the 11th century to liberate Jerusalem with his crusaders still appeals to the imagination. Entry costs 10 euros. If you want something a little more special, opt (during the summer months) for an impressive night visit.