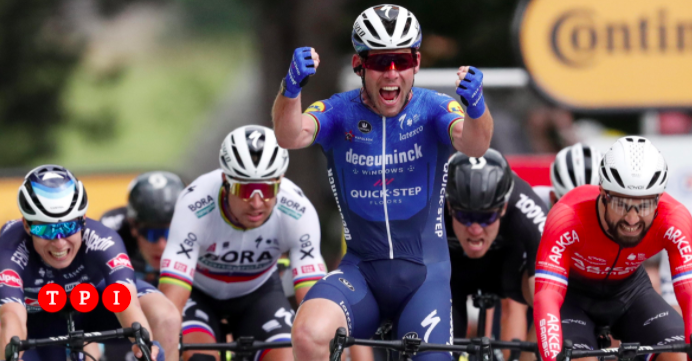 Mark Cavendish (Deceuninck Quick Step) won the fourth stage of the 108th Tour de France, along the completely flat 150km from Redon to Fourgeres. The Copenhagen champion 2011 preceded Jasper Philipsen (Alpecin Fenix) with Frenchman Nacer Bouhanni (Team Arkea – Samsic) third at the end of a thrilling sprint. For Cannonball this is the 31st success in the Tour de France, five years after the last one, caught in 2016 at the finish line in Villars-les-Dombes. Now only three wins separate him from Eddy Merckx’s all-time record of 34. The general classification remains unchanged with Mathieu Van der Poel (Alpecin Fenix) who kept the yellow jersey with an eight-second advantage over Julian Alaphilippe (Deceuninck Quick Step) with the Ecuadorian Richard Carapaz (Ineos Grenadiers) third at 31 ”.

Today’s stage was characterized by the very long escape of a couple, composed of the French Pierre-Luc Perichon (Cofidis) and the Belgian Brent Van Moer (Lotto Soudal). Having gone to the attack after about twenty km, the two, although never reaching an advantage of more than three minutes, made the group suffer a lot. Van Moer, in particular, sensing the approach of the platoon, broke the delay 15 km from the finish by detaching his adventure companion and attempting the solo. He would also have succeeded had it not been for the ravenous ferocity of the Wolfpack. The Deceuninck, in fact, took over the race at minus seven from the finish, when the fugitive still had one minute ahead, managing to halve the delay in the space of three kilometers, thanks to a brutal acceleration by Mattia Cattaneo. Van Moer kept a dozen seconds under the flamme rouge. It seemed until the less four hundred that he could do it but, in the end, he was swallowed up by the group in comeback 150 meters from the final banner.

Tomorrow a highly anticipated stage is staged. Along the 27.2 km of the individual time trial from Changé to Laval the ranking will take further shape by defining the hierarchies in view of the upcoming weekend in the Alps. It could be an opportunity for outgoing champion Tadej Pogacar (UAE – Team Emirates) to put the hands on the yellow shirt, if he wants to. Certainly, as those who love cycling know well, against the clock you cannot hide.