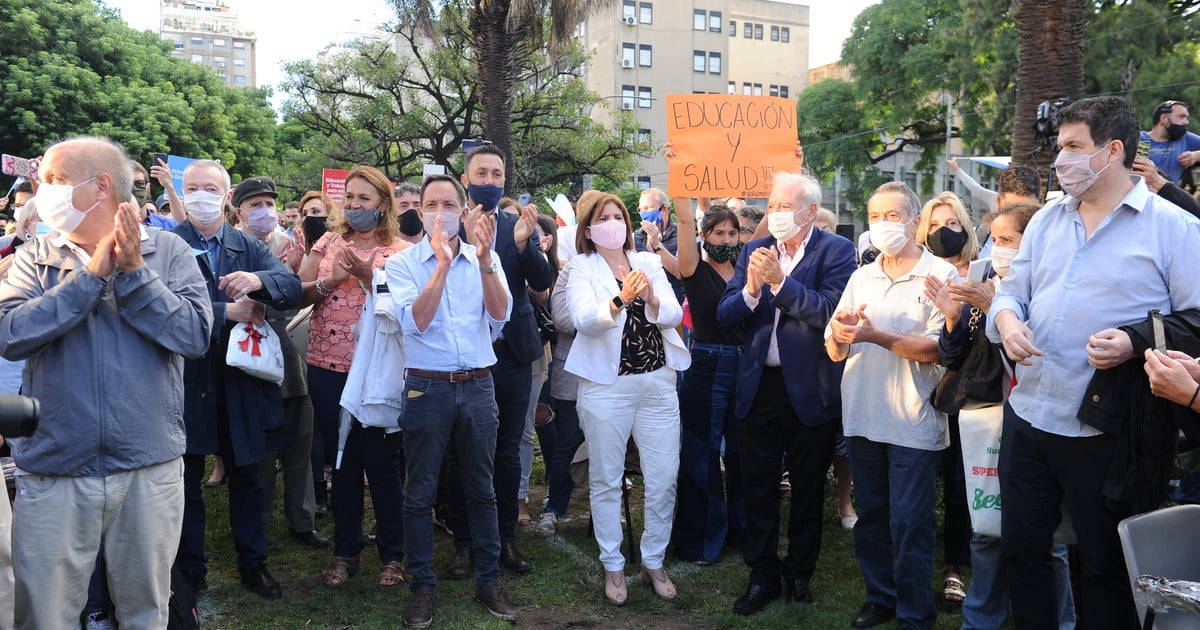 Under the slogan “Let’s go back to school”, the main referents of Together for Change led a “public class” in front of the Ministry of Education to demand that the national government return to presence in the classrooms. The activity was replicated in 100 cities of the country.

“There are enough testimonies to show that this year has been a loss for adolescents and children who have no school; that the vast majority of teachers want to return to classes; that they have made an enormous effort to teach them virtually but that we have to return to the presence. That we are showing, “said the president of the UCR, Alfredo Cornejo, who during his speech called President Alberto Fernández a” chanta “.

“What is lacking in Argentina are statesmen who know how to complement education with health and the economy and not chantas who talk and talk and contradict each other all the time, such as the President of the Nation and the Minister of Education“, Shooting.

Cornejo was in the front row with his peers from PRO, Patricia Bullrich, and from the Civic Coalition, Maximiliano Ferraro, who closed the act.

They were accompanied by a dozen national deputies. Among them, Marcela Campagnoli, Fernando Iglesias, Juan López, Karina Banfi and Facundo Suárez Lastra. Also present was the former Minister of Public Media, Hernán Lombardi, who was in charge of the organization.

“If on March 20 of last year we had begun to think about what to do with schools and education, we would not be with this level of improvisation that we are experiencing,” Bullrich assured in turn and stressed that “the fight for education is the fight for freedom, it is the struggle for the possibility of having institutions that make a difference to a country. “

For his part, Maxi Ferraro declared: “This recess is already too long “, and requested “a safe and careful return so that it is clear to the national government and to society that we are committed to returning to the classroom.”

The mobilization began with the intonation of the anthem and the presentation of teachers who related their critical experiences about the classes in pandemic. Among the protesters, there were no political slogans, only Argentine flags, although there were posters against the government of Alberto Fernández. “Open the classrooms”, was the scream that was repeated.

The activity was repeated in different cities of the country. From Córdoba, the president of the JxC interblock, Mario Negri, stated: “The return of students to classrooms, with the required health protocols, is essential for their learning. From Plaza Colón in Córdoba Capital we ask the national authorities and provincial open schools. “

The former Minister of Agriculture, Luis Etchevehere, declared in Paraná: “Together with parents, teachers and students in front of the first Normal School of Argentina in Paraná, founded by Sarmiento. Open the Schools! Ignorance fosters poverty and dependency”, wrote on the networks.