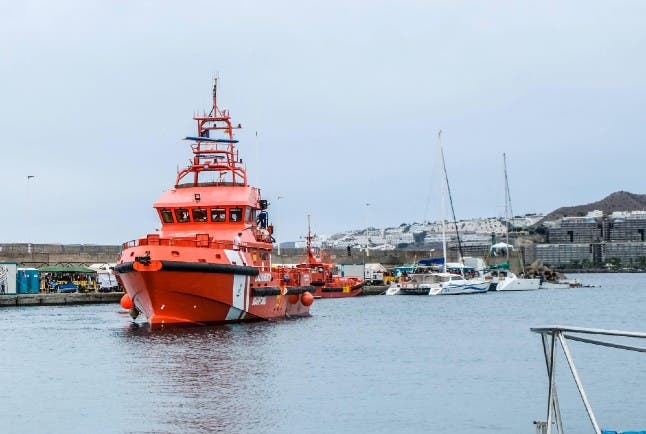 RED Cross workers resuscitated a toddler, one of nine children among 52 migrants rescued off the Canary Islands on Tuesday evening.

The young girl, thought to be around two-years-old, was part of a group brought to shore by Spanish coastguards after being rescued from vessels in which they made the perilous journey over from Africa.

But she appeared to stop breathing as the lifeboat docked in the port of Arguineguin where Red Cross medics waiting on the quayside performed CPR chest compressions to revive her.

She was then wrapped in a red blanket and transferred by ambulance to a local hospital along with nine others, including five other children and a pregnant woman thought to be suffering from hypothermia, according to emergency services on the island.

Also on Wednesday, a Spanish search and rescue plane spotted another boat carrying migrants about 80 nautical miles south of Gran Canary and a lifeboat was dispatched to collect them.

The number of undocumented migrants arriving in Spain’s Canary Islands increased nearly ten-fold last year to around 23,000, up from 2,687 in 2019.

But hundreds didn’t make it with 849 people reported dead or missing according to the UN’s migration agency “Missing Migrants Project.”

Over the last year the Spanish archipelago in the Atlantic Ocean has become the main route for those setting off from the West African coast to try and reach Europe, risking their lives in rickety, overcrowded boats with unreliable engines.

Faced with the influex, authorities on the islands have had to improvise temporary solutions, placing migrants in ports, hotels and schools while they create large camps that will eventually be able to house a total of 9,000 people.

Outside catering is allowed to open: Mainz hosts put chairs and tables outside