To advance with the Metrobus del Bajo, they began to demolish the Old Town Workshop School 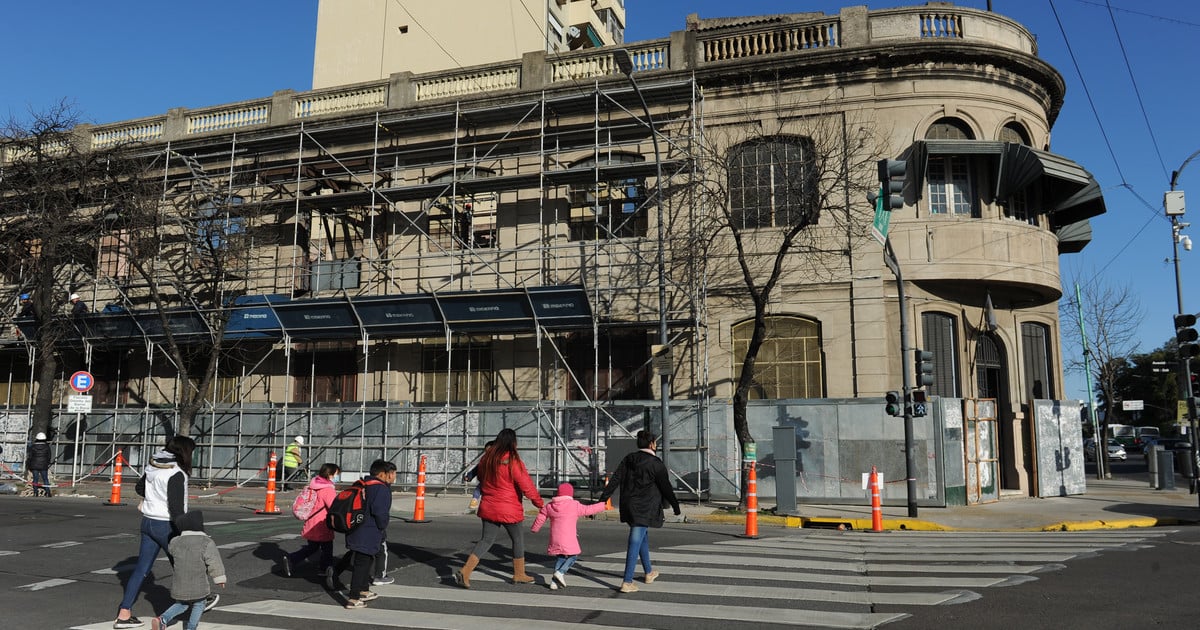 Disassemble the facade, demolish structures, fill the subsoil, level the ground. Four months will take to disarm more than a century of history in the Boca corner of Brazil and Paseo Colón. There the demolition of the Historical Center Workshop School, as part of the plan to lead to the Metrobus. Members of the institution do not agree and call to embrace the building to resist.

After two years of returns, precautionary and moving, the ruling preventing demolition was suspended. The centennial two-story building will be dust, a task that workers undertake every day from 7 to 17. They started on July 21 and will continue until mid-November, according to the City’s Secretary of Transportation and Public Works. , in charge of the Metrobus del Bajo.

Demolition it had been braked since November 2019 by the Buenos Aires judge Romina Tesone, who gave rise to an appeal for protection presented by the Observatory of the Right to the City and other organizations. The ruling ordered the measure to be suspended until it was found another space to be used as the headquarters of the school and this was put in condition.

That place ended up being Alsina 963, where the General Directorate of Music of the City worked. Its facilities were conditioned by the Buenos Aires Government so that the new headquarters of the school can be found there.

With the condition of finding a place already fulfilled, on June 22 Tesone lifted the precautionary measure and the demolition was enabled. On the same block as the building to be demolished, another one fell down at the end of 2018. It was the Marconetti, also by the Metrobus.

To explain why the school was demolished, the secretariat mentioned a decree: 1,436 of 1946. That text provided a new municipal line for Paseo Colón avenue and, remarks the same source, obliges to expropriate, adapt or demolish partially or totally the buildings that were left in the old line.

The other official reason is the need to move forward with the second stage of the Metrobus del Bajo, which will add almost two kilometers to the almost three of the first stage of that corridor, between Plaza San Martín and Avenida Independencia, inaugurated in 2017.

Once demolition is advanced, work will begin in the environment: Paseo Colón will be widened, new sidewalks will be made, spaces with urban furniture will be created and lights, trees and flowerbeds will be added.

But part of the school community and heritage associations believe that pulling it down is wrong and unnecessary. “Paseo Colón at that height has the same width as the Cabildo with the North Metrobus: 28 meters. We believe that the true objective is to enhance the real state development in the area, “says a member of the organization Casco Histórico Protege, who prefers not to give his name.

He remarks that the sector between Brazil and Martín García has the lowest density of public transport in the section. And, for that, he cites the source: Annex 1 of the technical report made by the Buenos Aires government to analyze the second stage of the Metrobus del Bajo.

From City Transportation they point out that demolishing the school will allow add a third lane to the north, “Necessary to absorb the turn to the right, very required by the ascent to the highway.”

With the demolition of the Old Town Workshop School, which was stopped by a judicial measure, they hope to move forward with the construction of the Metrobus from Bajo to La Boca. Photo: Juano Tesone

They also clarify that, if the building is maintained, “the alignment of the lanes would not guarantee the necessary road safety due to sudden changes in the axis of the avenue.” And that the widening of the avenue will allow add a north direction parador, so that there is not so much distance between stations.

“In that sector of Paseo Colón there is no building from the early twentieth century. That is why we insist that it is the only architectural vestige of those times and, if we lose it, we will lose the complete record of that part of our history “, stand out in the Protege Historic Center.

Despite the importance of the building, the regulations play against it: it was never included as property with patrimonial value in the catalog of the Advisory Council on Patrimonial Affairs. And for just a few meters it was outside the Historic Protection Area (APH).

With the demolition of the Old Town Workshop School, which was stopped by a judicial measure, they hope to move forward with the construction of the Metrobus from Bajo to La Boca. Photo: Juano Tesone

This weekend there will be hug the building in protest of the measure. It was called for Friday at 6:00 p.m. and Saturday at 1:00 p.m. “We will always remember the silence and indifference of all the people who made this patrimonial massacre possible,” says the invitation to participate in networks.

The Historical Center Workshop School arrived in Brazil and Paseo Colón in 2000. In July 2020 it moved to the new headquarters. Shortly after, classes began to be taught in that space, always virtually. Just from this Tuesday they will be in person.

Has some 120 students, who attend masonry, plasterwork, luthery and facade ornamentation workshops, among others. For them, the old building in Brazil and Paseo Colón is the most suitable for the trades they learn: light shines everywhere. And it is in itself a unique asset to restore.

“In the new headquarters we have a dividing wall on both sides, there is no natural light. It is very well arranged, but it is like a drawer ”, observes a student, who also prefers to keep his identity confidential. In the Buenos Aires Ministry of Culture, on the other hand, they emphasize that both properties have almost the same surface, and that Alsina’s has greater accessibility and connectivity.

Years ago, other options had been considered, which were finally discarded. One was Altos de Elorriaga, a house built around 1820 in Alsina and Defensa. The other, the building of the former Padelai, in San Telmo, which today houses the headquarters of Commune 1. According to Culture of the City, Alsina will be the definitive headquarters.

Euro2020, applause to Franco in Brussels: the ball relaunches Italy in the EU

Al Gergawi: The UAE shares its successful experiences with brothers and friends