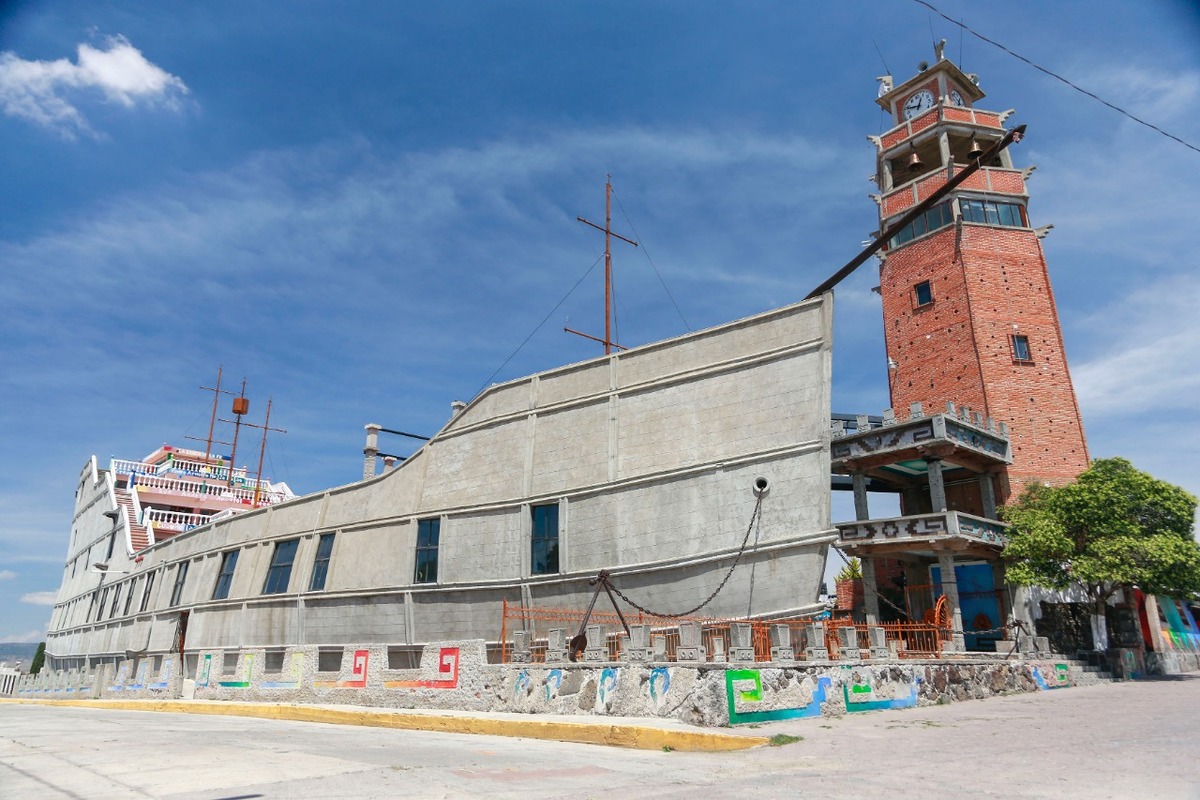 The Boat of Faith It is a quite peculiar Catholic temple, since its building is shaped like a ship and is connected to a huge lighthouse through a bridge. In addition, it has water mirrors on its sides that simulate the sea; and in another area a meadow, in which the grass is cut like waves.

Inside there are ropes, moorings and signs alluding to a conventional ship such as a command room, where there is a rudder, in the Popa Castle. In its poop there are masts with their perches to hang the sails, and from there you can see Popocatépetl, Iztaccíhuatl, Malinche and Citlaltépetl.

It also has a stern (rear part of a boat) and bow (front part); in this is its berth whose chains pretend to be ropes (ropes) figuring to immobilize the ship on each side, that is, to port (right side) and starboard (left side).

It is a temple located to the northeast of Tlaxcala, in the community of San Andrés Buenavista, belonging to the municipality of Tlaxco, which in 2019 obtained the tenth place in an architecture competition that was held in Italy, in the area of ​​modern design .

This work was created and designed by the priest, teacher, artist and architect Arnulfo Mejía Rojas, who passed away in 2016 and left as a legacy the design of this and 12 other churches with characteristics and lengths that break with the tradition of liturgical buildings.

This is a copy of the caravel Santa María and its peculiarity is that both in its architecture and in its decoration there are pre-Hispanic motifs, which represents the religious and cultural syncretism of our country. “He came to this community in December 1984 and began building the tower. The reason for the boat is that the 500 years of evangelization by the Spanish were coming and Saint Andrew (patron of the community) is a fisherman and the other, bigger reason, is that our Lord Jesus Christ preaches in the boats ”, he explains the priest Teófilo Concha Trujillo.

It reports that it is 90 meters long (length) and 28 meters high (strut), where the temple in honor of Saint Andrew the Apostle and four more levels are located. The property has the capacity to house 5 thousand people; of them, 2,000 in the temple alone.

The entire interior of the church is covered with wood, it has long corridors in which the ropes between column and column stand out as the deck railings. In them there are messages of respect and pre-Hispanic expressions. The same occurs on the walls, floor and ceiling, where different pre-Hispanic signs are carved.

“When we enter here we need about 10 hours for us to go looking. In the columns the Via Crucis appears in the pre-Hispanic way and the commandments, the works of mercy, all the wealth and pre-Hispanic symbols appear ”, said Teófilo Concha Trujillo.

Among the inscriptions, corn is represented, which gives life; ‘Ome Teotl in Tloque ahuaque’, double god or dual god; otli, way; ‘Tlaloque’, source of rain and life; Tlaxco, ball game; ‘ollin’, movement; ‘quincunx’, symbol of the unification of the world.

Most of the paintings found there are the work of the priest Arnulfo Mejía. “He was a great painter and a very prepared man,” says Teófilo Concha.

The temple and its connection to the past

One of its attractions is the creation of the main altar or Teocalli, which represents a stone of human sacrifices, used in pre-Hispanic times. In this area, an ambo stands out, from which the reading of the Bible is proclaimed at mass and other ceremonies; a presidential chair, the bases of the paschal candle and the baptistery.

Regarding the main altar, the twelve apostles and the gospels are represented, for which two circles were used, that is, the symbol of priesthood in the Nahua people that was the representation of the perfect, infinite, creative.

The baptistery is rarely used because there are works that require special care, such as the painting that represents the Seven Words. “It has its basin, its base with its very original candle,” says Concha.

At the back there is an entrance to the basement and a space where the priest is buried, as well as the confessionals: “On April 19 we celebrated his fifth anniversary of his death and we wanted to remember him with a monument (his effigy). There are five grave sites that will be used later, ”explained Concha.

In all that space we find many pyramids: “He wanted to retake the history and the pre-Hispanic roots, the pyramids, so wherever you look you will see and find pyramids.”

Another of its peculiarities is that the design, combined with the placement of small shells on the ceiling, gives projection to the sound. “The richness that is in the echo through these casseroles. The temple is impressive ”. On the first level, there is an art gallery with some permanent murals and other spaces where works by local and national artists are usually exhibited. It is dedicated to Don Hermenegildo Sosa, a painter from the community who has exhibited all over the world, said Teófilo Concha.

“On the second level there is a museum and a gallery dedicated to Father Arnulfo (…) whose philosophy was pre-Hispanic, Christian and cosmological. I was always going to handle the idea of ​​duality, death-life, the sun-the moon, day and night ”.

In that area are the easels, brushes, paints and oils that he used, as well as the last work he was doing, which is unfinished. There are also a series of objects allusive to boats, from small boats to a helm of command.

In the third there are rooms, some destined for bedrooms and others where they hope to place some of their works of art so that visitors can appreciate them. The fourth level houses the helm and a shop where people can purchase some souvenirs.

In sight, the lighthouse stands out, which joins the ship through a bridge so that people can visit it, in it the presence of the representation of Quetzalcóatl, one of the most important gods of Mesoamerican culture, stands out, sometimes considered the main divinity of the Mexica pantheon.

The building has the capacity to house up to 5 thousand faithful; Before the pandemic, an average of 2,500 people attended each weekend.

It highlights that 34 years were needed for the diocesan priest to complete his work. The priest points out that in October the patron of the church and town, Saint Andrew the Apostle, is celebrated, a commemoration where Father Arnulfo offered a meal to which just over 10,000 people arrived.

“He fed his benefactors and everyone who visited. He celebrated October 12 for Columbus Day, which is a bit in conflict on this issue, but he celebrated the meeting of the two cultures ”. He adds that these banquets offered exotic food, such as wild boar, venison and rabbit.

The current head of the temple reveals that the buildings made by the priest Arnulfo Mejía are known as the Route of Faith, whose main characteristic is that they present pre-Hispanic details, as well as the symbols of the pyramids and towers:

“He designed the thirteen chapels in the parish. In Ocotlán he was vicar and there he collaborated. In Iztulco he made the design of the atrium. Around here, in Atlancatepec, in San Mateo and other places in the state, he helped to design other liturgical buildings ”. He refers that his projects break the schemes for the construction of buildings of the Catholic religion.

Finally, it reveals that soon a museum will be installed in the lighthouse dedicated to the community’s artisans, as well as to the tlachiqueros and manufacturers of pulque, a drink so characteristic of the region.