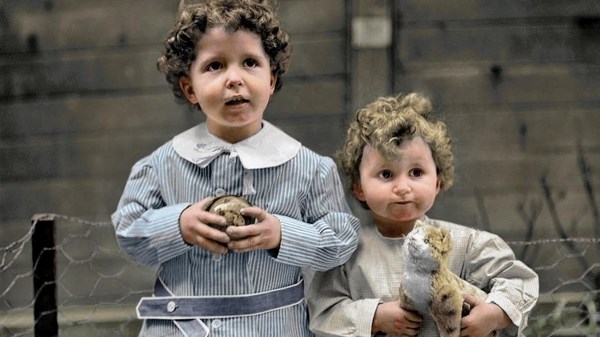 The Titanic was one of the largest and largest ships in the world, and it is an integrated city running over the ocean waters and the ship can accommodate more than 3500 passengers.
During the day of April 15, 1912, the world was on a date with the tragedy of the ship, which, during the late hour of the night, collided with an iceberg across the Atlantic Ocean, and after about two hours and 40 minutes, it sank to the ocean floor, causing the deaths of at least 1,500 of its passengers.
At that time, the international media reported many tragic stories of people who either died or miraculously survived this tragedy, the memory of which remained immortal in the minds of future generations.
Among these stories is the story of the two children, Navratil, that shook France and aroused sadness in the hearts of the French, as these two children lost their father at an early age in the Titanic sinking in the midst of a strange story that began in France, according to a report published by the “Arab Net” site.
Michel Navratil was born in the present-day regions of Slovakia during August 1880 and lived a period of his life in Hungary before moving by 1902 to the French city of Nice, where he opened a sewing shop that was attended by a large number of French people.
On May 26, 1907, Michel Navratel married Marcelle Carette of Italian descent who was 10 years younger than him. From this marriage, two children were born, the first of whom bore the name Michel, born on June 12, 1908 and the surname Lulu, while the second bore the name of Edmund, surnamed Momo, and was born on March 5, 1910.
In 1912, the marital relationship between Michel and Marcel deteriorated. Because of that, during that same year the couple prepared for separation. In the midst of these events, Michel Navratel became depressed and neglected his store before he set out to find a way to keep his two sons in conjunction with his separation from Michel.
On the ship of the Titanic, Michel Navratel found his way out, as the latter made a plan to travel with his two children, Michel, who was 3 at the time, and Edmund, who was two, to the United States of America to settle in Chicago, where a number of relatives who emigrated years ago.
To make his plan work, Michel Navratel sold the sewing shop to his friend and colleague Louis Hoffman for a low price. At the same time, Michel borrowed the passport of his friend, Hoffman, to forge his identity and facilitate his passage towards the Titanic and avoid the security control in the ports.
Meanwhile, Michel Navratel kidnapped his two sons from their mother and moved towards Cherbourg, where he managed to bypass security checks, using Hoffman’s name. Then, the latter arrived in Calais before moving later to Southampton to board, accompanied by his two sons, who told them that their mother would join them later, the Titanic and set off towards the United States of America.
On board the Titanic, Michel Navratel and his two sons stayed in the second-class passenger compartments. Throughout the run-up to the disaster, the father did not leave his two children and stayed close to them, fearing that a traveler would discover his true story.
As the ship collided with the iceberg, Michel Navratel came to his two sons’ room, accompanied by one of the workers on board the Titanic. Immediately, the father took the two children to a lifeboat and loaded them with a final message to their mother.
In his last words, Michel Navratel called on his wife to take good care of the two children, after he had found them, and for the last time he expressed his deep love to her.
The two children escaped death thanks to the arrival of the Carpathia ship at the right time to save the survivors, and then both Michel and his brother Edmund found themselves in America surrounded by the cameras of journalists.
The two children settled in New York and then in Boston, at the home of a woman who agreed to embrace them. Later, the French consul came on the spot to confirm the French origins of the two children, whose photos were circulated in the newspapers, and they were called Petime the Titanic.
Based on a photo in a newspaper, Marcel Carrett met her two sons, so she quickly set off for the United States of America and met them again after she lost track of them weeks ago.
For the rest of their lives, the two children cherished the memories of their father’s separation with the Titanic. As they grew up, Michel, nicknamed Plolo, became professor of philosophy at the University of Montpellier while he became the sister of an architect and died early at the age of 43 in 1953.

The numbers of the debutants with Spain