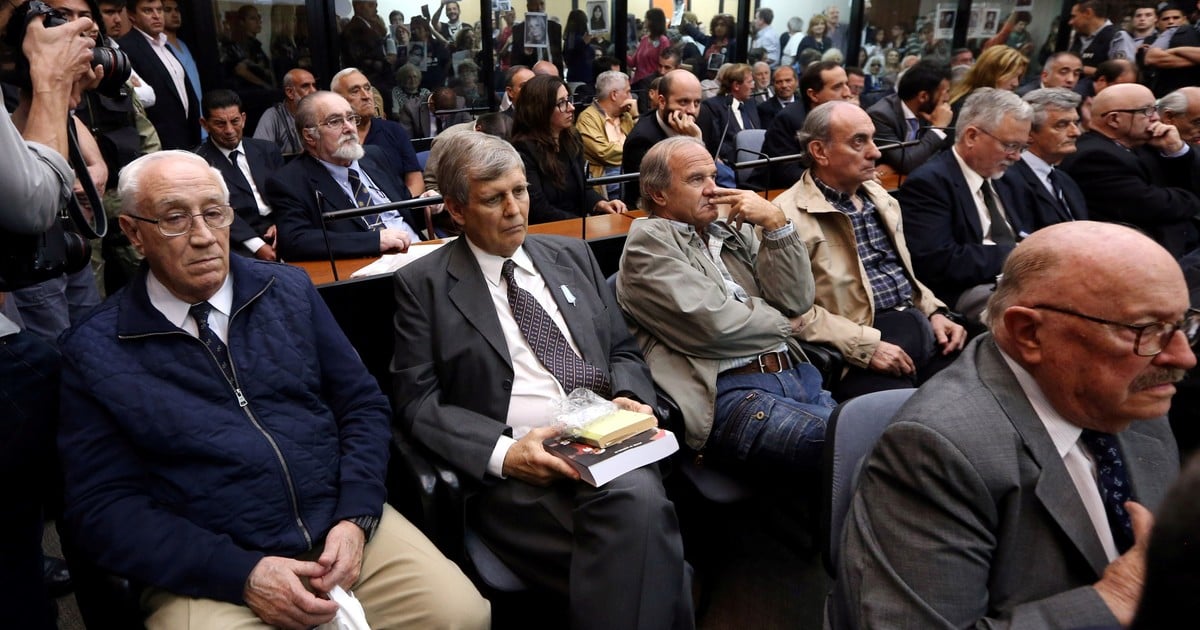 The repressor Jorge “Tigre” Acosta he was sentenced to 24 years in prison in a case that for the first time tried sexual crimes committed against detainees who were kidnapped in the School of Mechanics of the Navy (ESMA) during the last civic-military dictatorship.

It was also sentenced to 20 years from prison to another repressor who was part of ESMA task force 3.3.2, the intelligence agent Alberto González, in a verdict delivered today at the end of the trial by the Federal Oral Court 5.

Acosta, alias the “Tigre”, and González, also known as “Gato” or González Menotti began to be tried on October 27, 2020, virtually as a result of the coronavirus pandemic before the Court that is based in Comodoro Py 2002 and many of its hearings were reserved due to the nature of the crimes tried.

In both cases the penalties were unified to life imprisonment for the sum of previous convictions given to both repressors in previous trials for crimes against humanity committed at the ESMA.

The sentences were handed down for “aggravated rape for having been committed in collaboration with two or more people, repeated in -at least- ten opportunities”, dishonest abuse, illegitimate deprivation of liberty and torture, crimes that were declared imprescriptible for being against the law. humanity.

Meanwhile, González was convicted of the crimes committed to the detriment of Labayrú.

The events happened during 1977 and early 1978, according to the accusation with which both repressors came to trial, and the grounds of the verdict will be known on October 12.

The Public Prosecutor’s Office had requested sentences to 25 years in prison for Acosta and González, in an allegation in which the federal prosecutor Leonardo Filippini alluded to the fact that it was proven that in the clandestine detention center that operated in the ESMA there was “specific violence of content sexual and special impact on women “.

The three victims testified at the trial and confirmed what they suffered, in hearings held in quiet way.

In the first points of the verdict, the court rejected the claims of affectation to the principle ne bis in idem (not to be tried twice for the same fact) deduced by Acosta’s defense.

The magistrates also rejected the requests for annulment of the testimonial statement of one of the victims filed by González’s defender.

In addition, the Court rejected the requests for termination of the criminal action by prescription made by both defenses, based on the nature of imprescriptibility of the crimes that are classified as crimes against humanity.

In Acosta’s case, he was also found guilty of dishonest abuse, illegal deprivation of liberty and the imposition of torture aggravated by being committed to the detriment of a politically persecuted person, among other crimes.

However, the court acquitted the former head of WG 3.3.2 “for the benefit of the doubt” for two acts of aggravated rape in relation to one of the victims.

The investigation for sexual crimes committed in the ESMA was opened after the verdict in the second oral trial of the megacause that tried the repressors in that clandestine center and whose investigation was in charge of the former federal judge Sergio Torres, current minister of the Buenos Aires Supreme Court of Justice.

When issuing that verdict in 2011, the TOF 5 ordered an investigation into what was narrated by victims who testified as witnesses and recounted the rapes, physical and psychological abuse they suffered.

The first conviction for sexual abuse in trials against humanity was announced in 2010 in Mar del Plata, and until then, they were accusations that were processed as abuse and torture.

Gregorio Rafael Molina, sentenced to life imprisonment in the trial against humanity that followed for the crimes perpetrated in the clandestine illegal detention center of “La Cueva”, was the first repressor convicted in the country for sexual crimes

Since 2012, the Public Prosecutor’s Office of the Nation has promoted the criminal prosecution of crimes of sexual violence committed during State terrorism, and considers them as autonomous crimes with the purpose of establishing responsibilities.

Since then, more than 120 repressors have been held responsible for sexual crimes, according to calculations by the Office of the Crimes Against Humanity released in a report published in March this year.

Covid Torreón vaccine. Dates and venues for young people from 18 to 29 years old

Basic Finns Basic Finns announced their candidacy for the party’s leadership positions: six candidates will compete for the presidency