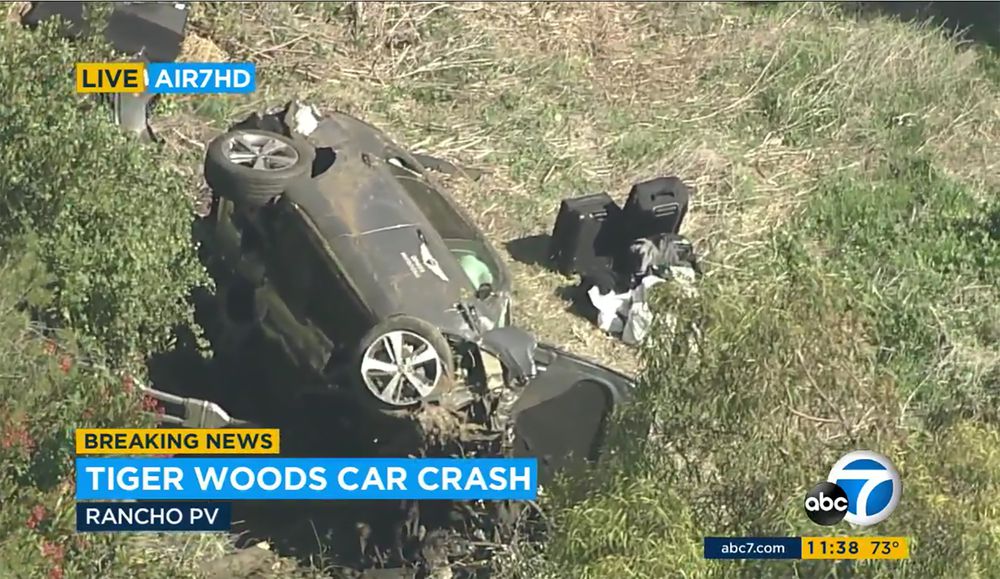 American golfer Tiger Woods, 45, is hospitalized after suffering a single car accident near Los Angeles, California. According to his representative, the athlete has suffered “multiple” injuries to one leg and is currently undergoing surgery. Local authorities reported that the car was left with “serious damage.” The accident occurred this Tuesday morning in Ranchos Palos Verdes, a city in Los Angeles County. Firefighters pulled Woods out of the overturned vehicle and he was later taken by ambulance to a hospital.

Wood was driving alone. CNN, citing official sources, has reported that the golfer’s injuries range “from moderate to critical.” Mark Steinberg, the representative of the famous athlete, has published a short statement. “He is currently in surgery,” said Steinberg, who asked for privacy and support. The Los Angeles County Sheriff’s Department said in a statement that they had to use “hydraulic rescue tools” to get the golfer out of the car. The accident occurred shortly before 7:15 a.m., authorities said. Aerial images over the scene of the accident allow us to see the overturned car with the front end badly damaged.

The last public appearance of Tiger Woods was this past Sunday, in a television interview on CBS during the last day of the Genesis Invitational tournament, of which he is the host but could not play because he had just undergone back surgery for the fifth time in his career. This new step through the operating room once again places his sporting future at a crossroads in an athlete heavily punished by injuries (five back operations and five knee operations) and leaves his participation in the first great of the season, the Masters of Augusta that each year is his big goal in the dream of reaching Jack Nicklaus’s 18 greats (Tiger has 15). “God, I hope so,” he replied when asked if he would be recovered to fight in April for a new green jacket. “First, I have to get there. A good part of that has to be decided by my surgeons, doctors and physical therapist. It’s the only backing I have and I don’t have much room for maneuver. At the moment, I am still in the gym, doing my rehabilitation work, ”said El Tigre.

Due to this new period of loss, Tiger Woods will leave the group of the top 50 golfers in the world ranking for the first time since August 2018. In total, he has been among this elite for 1,069 weeks, which represents 20 and a half years of his career. Precisely this coming August, Woods will turn 25 since he turned professional in 1996. The following year, in April 1997, he won the Augusta Masters, his first major. He began a unique career that in a quarter of a century has seen him live both heaven and hell.

It is not the first problem with the car that Tiger Woods suffers. In May 2017, he was arrested in Florida for driving under the influence of a mixture of alcohol and drugs. The player, who was also injured in the back then, as now, used various substances against pain, which affected his ability to concentrate and stay awake at the wheel. Tiger lost control of the vehicle but was not in an accident. The police detained him and asked several questions that Woods, practically asleep, could barely answer. The image of his police file, with his face swollen and his eyes practically closed, went around the world as the symbol of a fallen myth, a new fall to the bottom, together with the recognized infidelities that even led him to withdraw momentarily of golf.

Disaster. In India, the flood swept through the Dhauliganga valley

Suspicion can also be wrong