Through tears, Messi said goodbye to Barcelona and a city that has been his home 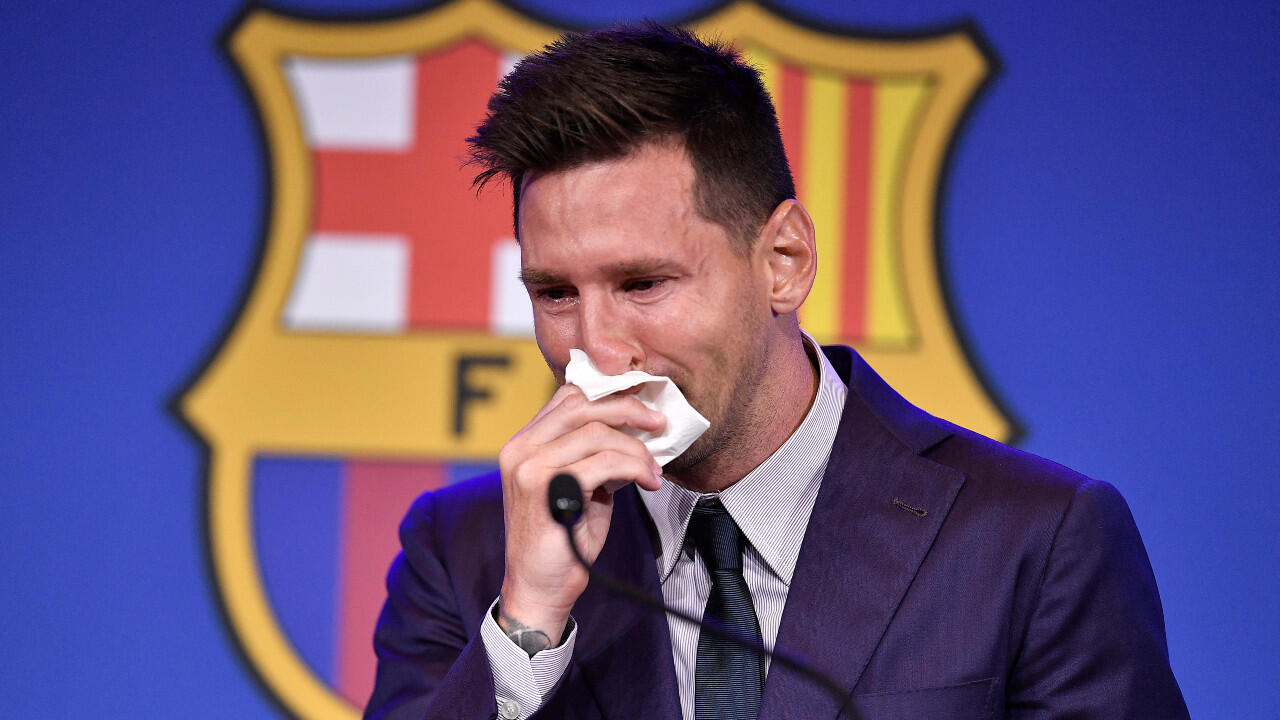 In an emotional and reduced press conference, Lionel Messi, visibly moved, explained the process that led to his departure from FC Barcelona and a city that he defined as his home. Asked later about his hypothetical arrival at Paris Saint-Germain, the Argentine star acknowledged that it is “a possibility”, although he clarified that he still has nothing closed with any team.

When Leo Messi arrived at FC Barcelona in 2000, the club had barely reached its centenary. On April 28 of the previous year, the entity had celebrated its 100 years in style. 80,000 people at the Camp Nou to see a Barça-Brazil with figures of the stature of Rivaldo, Ronaldo, Luis Enrique, Pep Guardiola, Luis Figo or Patrick Kluivert. All of them great stars of modern football.

None, despite everything, at the height of Lionel Andrés Messi Cuccittini, for many the best player in the history of football, a wizard of the ball, the great icon in the history of Fútbol Club Barcelona. Ironies of fate, Messi has had to say goodbye to his club, his city, his people, in a minor act. Emotional, without a doubt, but without the flavor of the epic that is expected from the departure of someone who has marked the history of one of the best clubs in world football.

“This is the most difficult moment of my sports career. I have had many difficult moments, many defeats, but not this. This does not come back, it is the end in this club and now a new story begins ”, the Argentine star said, visibly moved at the press conference.

Covid-19 has disrupted everything in the last year and a half, as well as Messi’s career at Barça. The bad rule of the previous board of directors and the lack of fans in the stands have depleted the club’s coffers. The new president Joan Laporta promised that he would do everything possible to retain the player, but the financial ‘fair play’ of the Spanish league has made it impossible.

“I want to thank the people for their affection, I would have liked to say goodbye in a different way. Being able to do it with people in the field, being able to hear one last ovation. Have them close, celebrate a goal, hear an ovation. And I am retiring from this club without having seen them for more than a year and a half, ”said Messi, unable to hold back his tears.

The farewell was not part of Messi’s plans

“Last year, when the burofax mess broke out, I was prepared, I knew what to say. But not this year. We were convinced that we were going to continue here, at home, it was what we wanted the most. We always superimposed our well-being , being in our house and enjoying this life in Barcelona, ​​which is wonderful, “confessed Messi.

“Today I have to say goodbye to this. I have been here for many years, I arrived very young, at the age of 13, and after 21 years I am leaving with my wife and three Catalan-Argentine children. This is our home,” added the Argentine, that several times he had to wipe his tears with a white handkerchief that his wife Antonella Roccuzzo had lent him, sitting opposite him with those three children. An image that shows that Messi, indeed, is leaving his home.

Behind them, two faces that without a word said a lot about what this farewell means for the club. Along with the rest of the Blaugrana squad, two strongholds of the entity such as Gerard Piqué and Jordi Alba saw the departure of their captain, their teammate, a friend. And Alba, although she tried, could not repress the emotion either.

The club and the player had reached an agreement

Something that Leo Messi wanted to review in this farewell is that both the club and he did everything in their power so that the end was different. “Everything was settled and at the last minute, due to the League issue, it couldn’t be done. I did everything possible to stay, it is what I wanted and it was not possible, “he said.

The ‘fair play’ is a law of the Spanish soccer league that limits the budget that a team can dedicate to the salary chips of its players and first team coaching staff, as well as to the subsidiary teams and lower categories of the entity. With Messi’s record and debts, it was impossible for Barça to fulfill it.

The Argentine star assured that he had given up half of his record to stay, but that was not enough due to the bad financial situation of the club. And he wanted to emphasize something that president Joan Laporta had already said in his press conference on Saturday: the club is above any player, even above Messi.

The solution to the competition led by Javier Tebas was for the club to give up its television rights for 50 years, something that Laporta was not willing to do. The alternative proposed by the entity was to pay in five years the token of Messi’s next two years, but it was not accepted.

“Barça has a very large squad, surely players will continue to arrive. Players pass, as Laporta said, the club is always more important than anyone. People are going to get used to it, as it always happens with everything,” acknowledged the Argentine.

Asked afterwards if his next destination will be Paris Saint-Germain, where he would meet his friend and former teammate, the Brazilian Naymar, Messi acknowledged that it is “a possibility”. “At this time I have nothing arranged with anyone. Several clubs have been interested and there is still nothing closed. We are talking, obviously,” he said.

A priori, it seems the only team with enough financial muscle to be able to tackle his signing thanks to the support of Qatar, personified in the owner of the club, Qatari Nasser Al-Khelaïfi. In France, the newspaper L’Equipe assures that they expect Messi to arrive in Paris this Sunday and that he will pass the medical examination no later than Monday. Other reports affirm that Tottenham and Atlético Madrid would have approached proposals by the Argentine, although they can hardly match PSG’s numbers.

Real news or rumors, the reality is that Messi, at 34, is no longer a FC Barcelona player. 37 titles – including 4 of the 5 Champions League obtained by the institution – remain in the club’s showcases forever linked to the Argentine player’s legacy.

At the end of his words, a closed ovation and many applause with which Messi, again, broke into tears. With this, a historical stage in Barcelona is closed, which now must put together a new sports project haunted by economic problems that, as the president recalled, do not end with the departure of Messi.