Thomas Buberl: “Spain will use European funds well, as it did in the previous crisis” 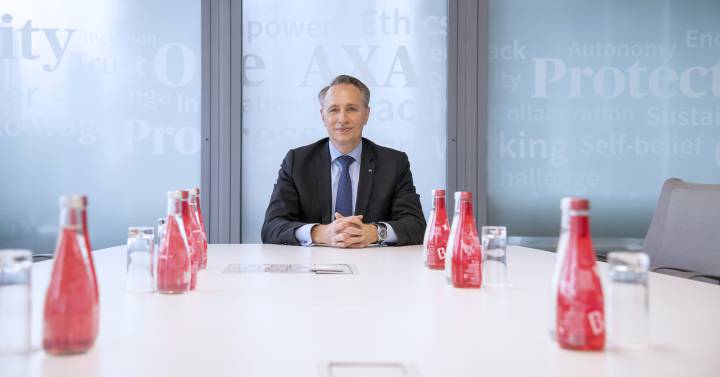 Was the first non-french CEO of a company that is almost a national emblem. Ten days ago, she participated in Paris at the most important technology fair in the country, Vivatech, where she detailed the latest agreement closed with Microsoft to improve customer service. Before going to the AXA ‘stand’, the manager attended exclusively to Five days: “For the AXA group, Spain is one of our top growth priorities,” he explains.

Last year AXA acquired a hospital in Cantabria. Do you plan to continue shopping?

Spain and Italy are the two markets where we most want to grow in Europe. We will do it both organically and through company acquisitions. Spain is crucial for us. On the one hand, it presents good growth rates in the insurance market and, on the other hand, it is a very stable and mature market, with very good infrastructures.

In what areas do you want to grow?

In the field of health, we would like to grow both in insurance and in the provision of health services. Buying the Igualatorio de Cantabria hospital has been a good entry point. The company has the clinic and also a health insurer. In its regional market it is the absolute leader, with a very good reputation. From there, we can continue to serve these customers, while it is the starting point for offering basic medical services in other medium-sized cities.

We want to focus a lot on the most basic and demanded medical services because we believe that we can help the patient find their way around what I would call the jungle of health services.

The public and private sectors are clearly differentiated, and each one has well-defined tasks. They coexist without competing. Going forward, we believe they will need to work together to tackle the problems of inflated health costs, especially with chronic disease treatment. I think this discussion needs to be put aside. It is not so much about rights or lefts, but about giving good service to the patient.

Will Spain be able to manage the Next Generation funds well?

I think so. After the financial crisis of 2008, when the country was in a very delicate situation, Spain was able to use European funds to make structural changes. The change in infrastructure is obvious. It has one of the most modern rail systems in Europe. Also in 5G, where it is at the head of Europe. The country knew how to use the funds in an intelligent way. I hope that, despite the political situation, which is always complicated in Spain, he will be able to manage money well again.

A possible recession can complicate everything…

We are in a very uncertain environment. We have a war in the heart of Europe, skyrocketing inflation, some bottlenecks in the energy sector and in China… In addition, the central banks are beginning to withdraw their massive monetary policies and raise interest rates. The countries have already used a good part of the reserves they had to combat the Covid-19 crisis and some very stressed public accounts. It is not clear that we are going to have a soft landing. The risk of recession in Europe is very present.

How will rate hikes affect AXA?

There is a first positive impact, because it will allow us to invest part of our portfolio in bonds with higher returns. Every year we renew around 10% of our portfolio, so it will take time for this effect to be noticed. The reverse of the rate hikes is that they are made because there is high inflation, and that implies that the claims we cover are also becoming more expensive. The good thing is that 90% of our business is covering technical risks, rather than financial ones, so we can gradually adjust prices. We are very flexible.

How has AXA transformed during your tenure?

Before the financial crisis, AXA had 80% of its activity dedicated to life insurance. A type of product that is not very flexible, because you define all the conditions of the contract at the beginning. In addition, with the long period of low interest rates that was coming, the business was going to be much more complicated. Now, instead, life insurance is only 10% of the portfolio. We decided to prioritize insurance for companies and health insurance as much as possible, two more technical areas in which we have more flexibility and can add more value.

Yes, obviously. That year we acquired that company, which made us become the world leader in corporate insurance. And, in addition, we went public and sold our life insurance company in the United States, AXA Equitable.

What has XL given you?

XL’s activity is highly uncorrelated with the evolution of the financial markets. Business risks, such as the risk of a ship burning down, have nothing to do with Japanese interest rates. We now have a more balanced and flexible balance sheet, having maintained the turnover level above 100,000 million euros.

How has the impact been in terms of solvency?

AXA has never been as strong as it is now. We have a solvency margin of 224%, something that has never been seen before, and that places us ahead of our main European competitors. We also have higher levels of cash. So yes, the balance sheet is now stronger and we have created shareholder value. Even when the first times were difficult and we said to ourselves: ‘oh, my God, what are we doing’. It has not been an easy journey.

What has been the impact of the sanctions against Russia on your accounts?

There are two types of impact. The first, for the payment of claims caused by this war, which will generate some losses for us. For example, in the insurance of aircraft under a ‘leasing’ regime. Russia has decided to keep all the foreign planes that were on Russian soil and that operated under a ‘leasing’ regime. Now a legal dispute will begin. In August we will publish an estimate of this impact, which will be equivalent to that generated by a medium-sized natural catastrophe. It will be a very preliminary estimate. The second effect is the loss of business due to sanctions.

AXA has a subsidiary in Russia…

Yes, although it is a small operation, which only brought us a profit of 40 million euros last year. We have taken all the steps to disassociate ourselves from this operation, such as withdrawing our advisers. But we can’t sell it. We have not completely exited because we have legal obligations to our clients, who continue to operate there.

What geopolitical scenarios do they handle?

As insurers we are used to evaluating risks. We define different scenarios and give you a probability that they will happen. We have four basic geopolitical scenarios. From the most optimistic, in which the war in Ukraine ends and the world returns to normal, to a catastrophic one in which a Third World War would begin. For each of these scenarios we have clear action protocols.

Are they afraid that China will get involved in the conflict?

It’s unlikely. AXA is the largest foreign insurer in China and we have very direct contact on the ground. There we have two joint ventures. With ICBC, the largest bank in the country, and with a Hong Kong bank for asset management. We also have a 100% owned car insurance company. Our operations there are doing well. Asia is essential for us. It is a region that contributes 1,000 million of our profit, 14% of the total.

Apart from Italy and Spain, where else do you want to grow?

In recent years we have been concentrating on the most important markets and have left 18 less strategic places, such as Poland, Greece, Singapore or Malaysia. We want to maintain the focus on health services and insurance, as well as on company policies, where we believe we can add a lot of value.

Is AXA going to have to raise its insurance prices to adapt to high inflation?

There are two effects. It is true that with high inflation you have to raise prices because the cost of claims is higher. But at the same time, with higher interest rates we will be able to obtain better returns on our investment portfolio.

How do you see the fight against climate change?

We are very involved. Before the war in Ukraine there was a very strong push, both public and private. Now, some doubts arise. Some countries have reopened thermal plants to burn coal. But I firmly believe that the war will be an accelerator to move towards a new energy mix.

How does it affect insurance?

There are more and more natural disasters. The good thing is that in the most destructive, like hurricanes, prevention works better and better, which reduces damage. The downside is that so-called secondary hazards, such as fires and floods, are also on the rise. In these areas, I believe that public-private collaboration through schemes such as the Insurance Compensation Consortium is key.

See also  How is the European leadership in the face of the Russian attack on Ukraine? - France 24
Tags: backgroundBusinesscompanycrisisdoEuropeanHealthlifemandatePolicyprevioustackthomas buberl spainto haveuse

Football Manager 2022, sales of over one million copies on PC