This will be the retirement after the pension reform 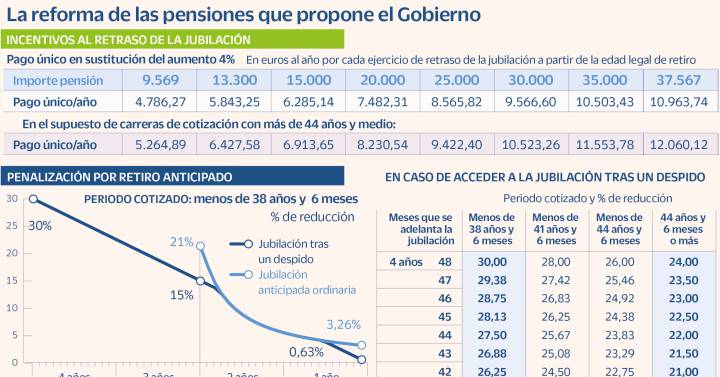 The agreement reached this Monday by the Government and the social agents for the first package of measures to reform pensions will lead to an increase of two points (up to 4%) in the bonuses for the delay of retirement and penalties if the worker decide to anticipate it. In the first case, another of the novelties that the new law will include is the option of opting for a single monthly payment. These would be some practical cases:

Penalties for the retirement advance

In the event that the worker has accessed retirement after a dismissalYou can do it four years before the legal retirement age, but this would entail a maximum penalty that would range between 30% and 24%, which will depend on the time contributed. If a person has contributed for less than 38 and a half years, the penalty will be 30% in the event of advancing retirement four years; if your contribution was higher than the previous one, but less than 41 years and six months, the reduction drops to 28%; if it contributed less than 44 and a half, the penalty would be 26%; and finally, for those who contribute more than 44 and a half years and advance it four years, the cost would be 24% of their pension.

It should be noted that the legal retirement age, which was originally 65, has been gradually delayed since 2013 and is currently at 66 years. The objective is for him to reach 67 years of age in 2027. The penalties for the advancement of the pension will be on the pension itself, that is, they will not be applied on the basis of contribution. In addition, they will be monthly, which means that the penalty will be greater for each month that the pension is advanced up to the aforementioned maximum of four years. For example, advancing it by a single month would lead to a reduction in retirement that would range between 0.5% and 0.63%, which would depend on the amount of time the retiree contributed.

On the other hand, if it is an ordinary retirementOnly a maximum of two years can be brought forward, which will entail a 21% penalty for those who have contributed less than 38 and a half years; if the worker has contributed for longer than the previous assumption, but less than 41 and a half years, the cost of bringing his retirement forward two years would cost him 19%; If you have contributions for less than 44 years and six months, the reduction would be 17%; and finally, in case of having contributed more than 44 and a half years, the worker would start to receive 13% less pension if he advances it two years. As in the previous case, these reducing coefficients are modified for each month that the pension advances.

The new law will include, in turn, two types of bonuses from which the retiree can choose in case of delaying their retirement: on the one hand, an increase of 4% for each year that is delayed; Or, the pensioner may choose to collect a single amount of money for each year that he continues to be active. This amount varies according to the amount of the pension.

For maximum pensions, whose amount is 37,567 euros per year, the single payment that the retiree may choose will be 10,963.74 euros if he decides to waive the 4% annual increase, and if his contribution period was less than 44 and a half years. In the event that he had contributed for more than 44 and a half years, the only payment he could choose would be 12,060.12 euros.

If, on the other hand, the retiree is entitled to a minimum pension of 9,569 euros per year and you decide to continue working, the only payment you can opt for is 4,786.27 euros, as long as you have contributed for less than 44 and a half years. In the event that this amount of time has been exceeded, the payment becomes 5,264.89 euros per year that remains in the labor market.

In the case of a average pension of 20,000 euros per year, the single payment, in case the pensioner has contributed less than 44 and a half years, will be 7,482.31 euros. In case of having exceeded this time barrier, the payment becomes 8,230.54 euros.

In the case of a pension of 30,000 euros per year, the single payment to which the retiree will be entitled will be 9,566.60 euros per year that he continues to be active, if he does not exceed 44 and a half years of contributions. If it exceeds it, the payment becomes 10,523.26 euros.