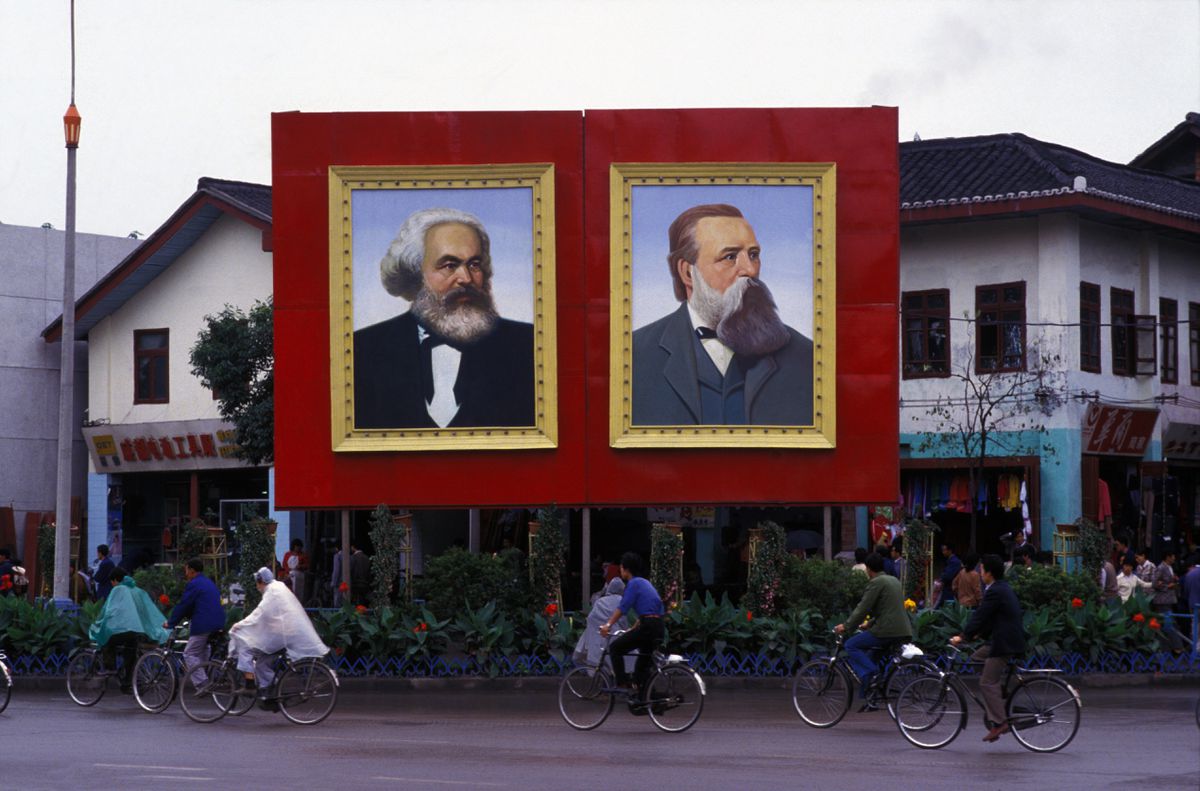 The thought of Karl Marx seems written, in indelible ink, on the wind of History. It always reappears, in the context of economic and social crisis, with all its lucidity and its ability to stimulate reflection. His gaze on the mechanisms of capitalist production continues to shed understanding and light on the main problems of our world and of our time.

There are many Marxisms in Marx, many refutations and rescues. Postcolonialist or orthodox optics, visions that condemn his patriarchal bias or that celebrate his relationship with nature and the environment. In any case, as a social theorist, Marx disrupted the ideological schemes of the bourgeois class, of capitalism, bursting the seams and traps of their language and, at the same time, of their ability to dominate.

In Galicia we use the phrase “move the frames”To refer to a severely condemned practice, which consists of altering, at night and treachery, the boundaries and physical marks that surround a land or agricultural parcel. Sometimes those frames do not exist physically: the stone, the tree, or the small stream that delimited the property has dried up. But that ancestral wisdom of the border survives in oral memory, almost in the collective unconscious.

Marx and Engels, in The communist manifesto, they moved the invisible frames of western thought. In full view of the world, in broad daylight. They both started a new conversation. With a spirit as hopeful as it is revolutionary, disrupting conventions and denouncing atavistic injustices.

Marx has been caricatured and simplified countless times. The very language that he helped to dismantle has played tricks on him. The translations, for example, carried out over the years on the German original, have instituted phrases and platitudes, such as “dictatorship of the proletariat”, which do not correspond to the exact substrate of their theses.

Their metaphors have also sometimes overshadowed the categories to which they allude.

The communist manifesto is a propaganda text, political, it should not be forgotten. And yet, his literary soul surprises him, his limpid, assertive style, in which the four hands of two friends show through, intertwining their judgments and their desires. It is a fraternal text, not only because of its shared invoice, but also because of its nature as an open letter to humanity and the working classes.

Marx, knowledgeable and speaker of several languages, regularly read Homer, Shakespeare and Cervantes. Also to Dante. Declared entire passages of The Divine Comedy, a devotion shared with Engels, who paid homage to the poet in the prologue to the Italian edition of The communist manifesto, in February 1893: “Will Italy provide us with a new Dante who heralds the birth of the proletarian age?” Engels wonders. And to Balzac, of course. Marx admired his ability to explore the depths of the human soul and the social transformations of his time.

Marx’s son-in-law, Paul Lafargue, author of that visionary essay, The right to laziness, on one occasion cited old Karl’s predilection for a work by the French writer, The Unknown Masterpiece, in which the philosopher of Trier was miraculously reflected. Lafargue said: “In this work a brilliant painter is tormented in such a way by the desire to reproduce things as exactly as they are reflected in his mind, that he polishes and retouches his painting over and over again until finally it turns out that he has not created but a shapeless mass of colors, which nevertheless represents to his veiled eyes the most perfect reproduction of reality ”.

Perhaps through that same prism, that of a work in perpetual growth and transformation, it is more appropriate to approach, today, the reading of The communist manifesto of Marx and Engels. Not as a static, imperturbable, monochrome dogma, anchored in its own reason, but as an interpretative key, as blurred as it is exact, that allows us to polish and retouch, over and over again, our vision of the world and of things.

In this sense, The communist manifesto it is one of those magical and inexhaustible books, born to last, that manage to portray reality and, at the same time, transfigure it. I believe that Marx and Engels were, themselves, aware of the processual condition of their work, or at least of the unpredictable variability of an equation, which, in the name of communism and a revolutionary ideal, is resolved with the repeal of the eternal truths and the conquest of a genuine democracy. This has been reflected in the different prologues to the international editions of the book: a set of Russian dolls that hides, inside, the subtexts and paratexts that make it up.

Approaching, with this preface, this interpretive genealogy is, in addition to a responsibility, a pride, embodied in a deep respect and admiration for the voices and contributions of Marta Sanz, Wendy Lynne Lee, José Saramago, Santiago Alba Rico, Iván de la Nuez and José Ovejero, in charge of editing and translation.

José Mesa and Leompart, at the head of Emancipation de Madrid —weekly in which Pablo Iglesias from Ferrol also participated— was, in 1872, the author of the first version of The communist manifesto published in Spain. This text does not come directly from the German original, but previously passed through French and English to reach our language.

The drafting of The Socialist, at Calle Hernán Cortés, number 8, in Madrid, saw the birth, in 1886, of another of the first editions of The communist manifesto in Spain. The building no longer exists and nothing, in that narrow street, perpendicular to Fuencarral street, places the origin of the solidarity proclamation of Marx and Engels in that place. Claiming such memory is a political task, apparently unthinkable in an amnesiac capital, whose rulers have not hesitated to remove plaques and honors to the socialist Francisco Largo Caballero from public space.

It is moving to think of those first copies, sheets of paper, flying from hand to hand, stored, like gold on cloth, under the work uniform or in the folds of a skirt. Words forever etched in the pupils and in the hearts of those women and men whose hope must still challenge us today, because their hope is, after all, the same as ours.

The “time of now”, affirmed Walter Benjamin, is that concrete moment in which the past collides with the present and re-emerges in it. Perhaps like that great wave that breeds far from the shore, where you cannot see it, in the middle of the sea, and that ends up breaking on the rock under our feet. Now.

This new installment of Manifest It is, in this sense, an act of memory and redemption, which happily joins the commemoration this year of the centenary of the Communist Party of Spain. A PCE, founded in 1921, that would suffer, throughout its troubled life, wars, repression, exile and clandestinity.

In all that time, The communist manifesto it has continued to develop its programmatic character, to the beat of the century, the global economic crises and the great revolutions. Capitalism has always been in front, in any of its diverse and voracious mutations, ready to engulf, corrupt and disintegrate the very reality that constitutes it, but without ever being able to escape the theories of Marx and the transforming power of this text. A book that tells us about utopias, encrypted in our present, and in which beats, today as yesterday, a vital and passionate defense of democracy and freedom.

Yolanda Díaz is Minister of Labor. This text is his prologue for the reissue of ‘The Communist Manifesto’, by Karl Marx and Friedrich Engels, which will be published this September 8 (Gutenberg Galaxy).

How could Messi fit in at Paris Saint Germain?