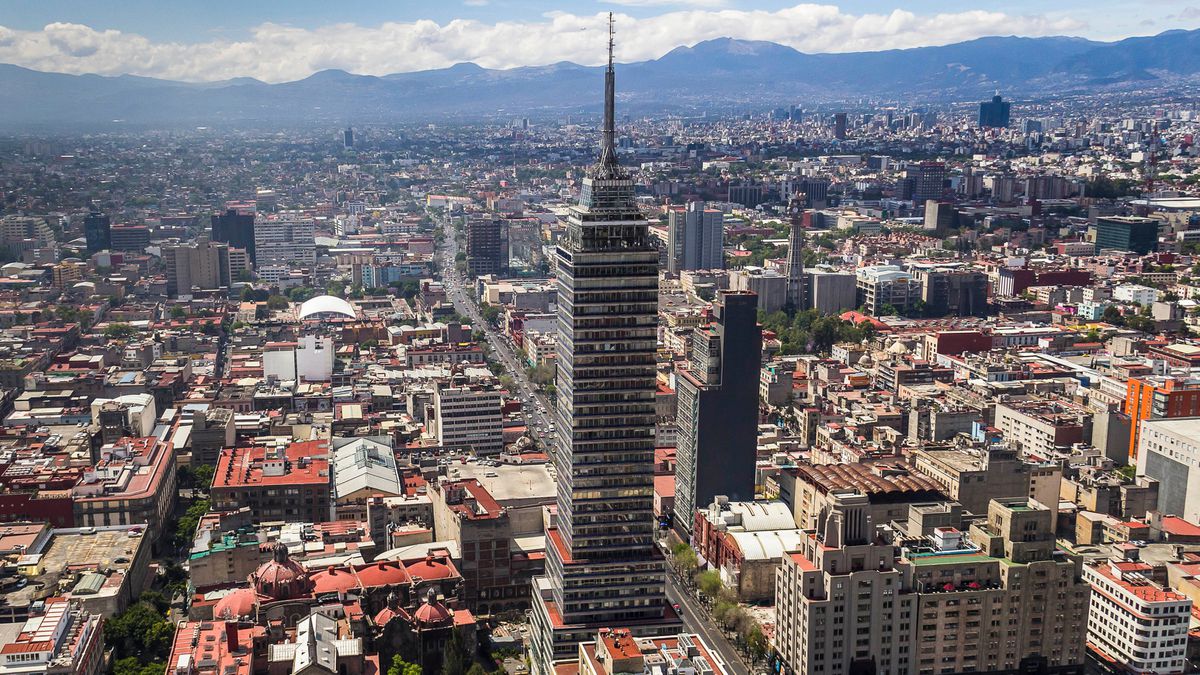 Anyone who has been to Mexico City has looked at the time on the digital clock at the top of the Latin American Tower. ‘La Latino’, as it is commonly called, is 182 meters high, 44 floors and a metal structure covered by huge windows in blue tones and slightly fogged by the passage of time. This anti-seismic jewel of modern architecture, which turns 65 this April, is one of the skyscrapers most admired by the 20 million inhabitants of the metropolitan area of ​​the capital of the Aztec country.

Its design was in charge of the Mexican architect Augusto H. Álvarez, one of the main exponents of modern architecture in Latin America. “He was invited to participate in this innovative project by the Latin American company Seguros. There he embodied his desire to build a modern, slim building with proportions similar to the skyscrapers in the United States. Álvarez was inspired by the Empire State Building and the Chrysler Building, both in New York ”, explains to ICON Design José María Nava, an architect professor at the faculty of architecture at the Universidad Iberoamericana, the same one that architect Álvarez founded in 1955.

However, the idea of ​​building what would be the tallest tower in Latin America (until then the Altino Arantes building in São Paulo was) seemed a complicated task due to the adverse soil conditions in Mexico City. The ancient capital of the Aztec empire was built on an islet in Lake Texcoco and to provide lightness and flexibility to the structure, something essential in the event of an earthquake, Álvarez – together with the civil engineer and geologist Leonardo Zeevaert and the American engineer Nathan M. Neumark, considered one of the fathers of seismic engineering – chose to make the skyscraper’s facade made of steel and glass.

“Many people believe that the Latin American Tower has hydraulic jacks that protect it from earthquakes, but it is a myth,” Nava explains on the other end of the phone. The truth is that the key to the anti-seismic technology of ‘La Latino’ is in the bowels of the soil that support its 25,000 tons of weight. “Under the tower they placed 361 pointed concrete piles. These pillars cross the entire unstable area of ​​the subsoil, filled with water and sand, and are hooked just over 30 meters deep. Right where the first layer of hard and stable earth is ”, says the Iberoamericana professor. This makes that the structure does not sink in a city that descends from 2 to 40 centimeters per year, according to research of the National Council of Science.

Another highlight of this anti-seismic technology is in the three totally hollow basements that act as a kind of waterline for a ship. “For a boat to float, its structure has to be hollow and have air inside so that the water pushes it up. This is how this tower works: it is as if it were floating with the water that comes out of the ground. This gives it a stability that allows it to wiggle without collapsing in the event of an earthquake. It sways like a boat in a wave and at the same rate as the ground ”, Nava points out.

This is how the Latin American Tower became the first skyscraper in the world built in a highly seismic area, since the Mexican Pacific is located in the Ring of Fire, the area where there are more earthquakes and volcanoes in the world. “It has endured three great earthquakes without suffering any considerable damage: in 1957, just a year after its inauguration, it endured one of 7.8 degrees on the Richter scale; in 1985 another of 8.1; and the last, in 2017, of 7.1. The only thing that broke were some crystals, ”says teacher Ramón Abud, professor and architect at the National Autonomous University of Mexico (UNAM).

“The anti-seismic technology of ‘La Latino’ was very innovative and revolutionary for the time. The same concept that the ancient inhabitants of Tenochtitlan used in their constructions was used. In the Templo Mayor, an Aztec archaeological site near the tower, we can see the wooden piles found under the pyramids ”, reflects Abud. Although the Major Tower of Mexico City, inaugurated in 2003, was the first skyscraper in Latin America to have seismic dampers throughout its structure capable of dissipating the energy produced by the movement of the earth.

The metallic structure of ‘La Latino’ was created by the McClintic-Marshall company, located in Pittsburg, Pennsylvania. The steel girders of the Empire State Building were also created there. “These two towers are practically sisters because they were born in the same ovens,” says architect Edzon Morales, president of the Illustrious College of Architectural Engineers of Mexico. The innovative structure and foundation of the Latin American Tower served as an example for the construction of skyscrapers in areas with high seismic risk, such as Japan or Chile. “Its foundation system also extracts the water from around it so that the same structure goes down evenly with the natural descent of the city, but it does not sink by itself,” Morales explains.

On the other hand, the area where it is located was a very important place in pre-Hispanic times, since it was where the Aztec emperor Moctezuma’s zoo was. There they kept royal eagles, hawks, dogs and snakes, mainly, which were used as food or as an offering in rituals. After the conquest of Mexico, all that area became part of the properties of Hernán Cortés.

At present, ‘La Latino’ is one of the main tourist attractions in Mexico City, since its viewpoint offers one of the best panoramic views of the Mexican capital. “In 2019 we registered more than 600,000 visits. Its location allows a clear view of the four cardinal points of the city ”, acknowledges Pedro Fossas, director of the Torre Latinoamericana real estate agency. The skyscraper has eight elevators, two museums, two restaurants and dozens of private offices occupied by companies such as Seguros Latinoamericana, Inmobiliaria Torre Latinoamericana, Miralto SAde CV, Telcel and Seguros Imbursa, the latter two owned by Mexican magnate Carlos Slim, one of the richest men on the planet. “This tower was a symbol of progress and modernity and is now considered one of the safest buildings in the city and in the world,” concludes Fossas.

Peruvian 'Julio Iglesias' reveals that his brother died of COVID-19

“A problem at this point”: Merz shoots openly against Merkel at “Illner” – the guest is flabbergasted

Battlefield 6 Battle Royale May Not Be In Launch Game