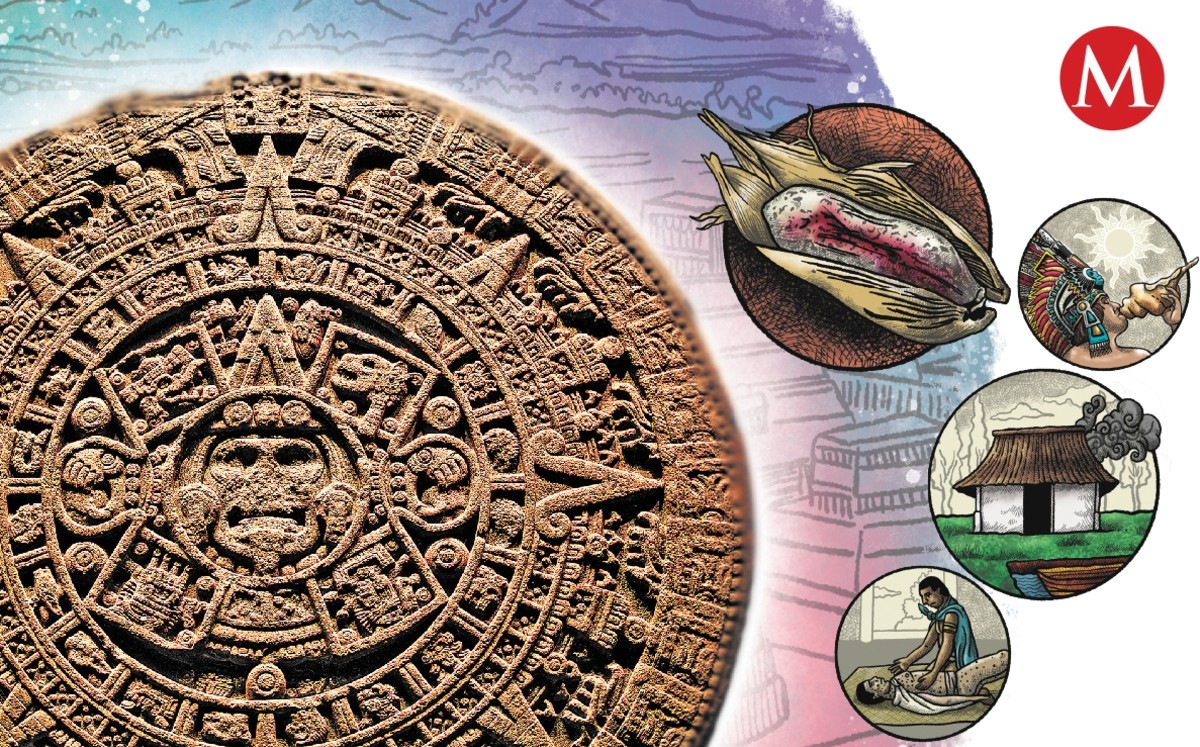 One of the great curiosities of any reader about pre-Hispanic societies is how they lived everyday. There are multiple studies referring to the great themes, the chroniclers of the Indies that offer certain approaches, but we know little about what happened inside houses or palaces.

Enrique Ortiz, better known as Tlatoani Cuauhtémoc on his Twitter account, is a popularizer of history who proposed to share some details of the Mexica, which is gathered in the book The prehispanic world for people in a hurry (Planet, 2021).

Here some snippets, selected with the authorization of Grupo Planeta.

The day in Tenochtitlan began with the sound of the conches and the knocking of the huehuemeh, tall cylindrical drums made of wood. From the top of the temples in each neighborhood, and from the Templo Mayor, the priests played these instruments to receive Tonatiuh, the sun, and to mark the different times of the day.

The houses were located in a chinampa or land, on one side of the family’s growing area. They generally consisted of a rectangular floor plan with a single entrance and adobe or bajareque walls, covered with white stucco. They used to have one to three rooms and lacked windows and wooden doors. The lighting was poor inside, so it was necessary to use torches, usually made of a resinous wood known as ocote.

Most homes they were very simple and were usually full of smoke from the stove. This smoke served to keep away the clouds of mosquitoes and other insects that abounded in the city, built in the middle of bodies of water and swamps.

The father of the family and the children squatted for the first meal of the day. They used fired ceramic containers similar to glasses and plates, as well as gourds, they ate with their hands using the tortilla rolled up to weigh the sauces of the different stews. Meanwhile, the wife prepared the itacate, a food package that could carry tamales, tortilla chips, pieces of tortilla, beans, dried meat and some sauce or preparation called molli in those years.

This dish was made both for daily consumption and for large banquets in the palaces of Moctecuhzoma Xocoyotzin Huey Tlahtoani from Tenochtitlan. In addition, it was an important food for the religious ceremonies carried out by the ancient Nahuas.

Tamales were used to strengthen social ties, feed the destitute and needy, and to demonstrate status, since the powerful and rich families cooked them in large quantities to supply the temples, feed the poor and the inhabitants of the neighborhood.

The calpixque were the representatives of the Mexican central government and the Triple Alliance in the various capitals of the allied, tributary and occupied provinces. One of the main functions was to collect the tribute contributed by the subjugated manors and send it to Tenochtitlan. They were also responsible for maintaining stability and peace, stop possible uprisings, punish rebellions and apply justice.

The Guild of Priests was the most powerful institution in Tenochtitlan. They organized and supervised the calendar of religious festivals and rituals, administered hundreds of temples and schools, they served as diviners, counselors, warriors, and teachers. Their presence was necessary to officiate ceremonies in the calpulli, to bless commercial expeditions and to provide private religious services for the ruler and his family.

For the Mexica it was very important to respect social hierarchies. TO Moctecuhzoma, the ruler of Tenochtitlan, could not be seen directly in the eyes: whoever dared could be executed. To greet the Huey Tlahtoani during an audience, three deep bows were to be made while saying; “Lord, my lord, my great lord.”

In casual encounters, when rigid protocol was not the rule, people they could greet each other by holding each other’s forearms. It was also common to hold on in this way and walking together, talking, inside the house or palace.

Regarding the verbal greeting during a visit, phrases were used that demonstrated empathy between the interlocutors. It was commonly said “be careful when walking, do not fall”, with certain variations in the names according to social class, although they always showed affection: “my lady”, “little brother”, “little sister”.

Learning and mastering magic required a lifetime of study and dedication. In addition, there were some signs that could facilitate this path of knowledge for the apprentice. Whoever it was struck by lightning and survived, it would be an excellent granicero, as it would have the ability to forecast frost and hail, storms, to try to avoid them by appeasing the rain gods, as well as to perform rituals to promote beneficial rains for crops. He would understand the magic of the great rain wizard, Tlaloc.

In times of the Mexica, what caused a disease was thought to be an imbalance in one of the three entities moods or having offended a deity. According to this thought, nothing was random: everything had a reason, a reason. If someone was bitten by a scorpion it was because he had not made enough offerings and prayers to Tezcatlipoca, Mictlantecuhtli or some deity of the underworld. If a person fell down a ravine, it could be interpreted that the divine wind of Yohualli Ehecatl had pushed him, because the deity was angry, aggrieved or simply because a sacred space had been trespassed at a bad time.

The most feared sorcerers in the Nahua world were the so-called tlacatecolotl, “owl men”, who prowled at night to attack their victims using their dark arts. These sorcerers had Tezcatlipoca as their patron, and they constantly performed penances and offerings to the deity known as Night Wind, Yohualli Ehecatl. Among these there were the temacpalitotique, “the one who makes dance with the palm of the hand”, who at night used magic to immobilize their victims in order to steal their belongings, rape them or cause death.

The night had a strong symbolic charge for the Mexica. It was believed that during that period Tonatiuh, the sun, it crossed the underworld and fought with the beings that inhabited it. At the end of his battle, he emerged triumphant from the east to re-feed life on Earth with his light and heat. During the absence of the great luminous star, the ruling deity was Tezcatlipoca, the smoking mirror, associated with magic, darkness and war. That is why night was the time when various creatures appeared.

One of the fantastic beings that was present on the grounds The wastelands of the great Mexican capital and its surroundings were called Cuitlapanton or Centlapachton. It was a hairy dwarf with a big butt and waist-length hair, who loved to surprise the men who came out of their houses to evacuate their bladders or bowels. Finding her was a harbinger of misfortune, even death.

A legend that has been alive since the 16th century, and even before the arrival of the Spanish to the present day, is La Llorona. The oldest testimony about this creature comes from the inhabitants of Tenochtitlan, long before the Conquest; it was about manifestations of the goddess Cihuacoatl, “serpent woman”, protector of women who had died in childbirth and patroness of human sacrifice and war.

These appearances of the goddess were part of the dire omens that announced the arrival of Europeans and whose protagonist was the Huey Tlahtoani Motecuhzoma Xocoyotzin. During the nights, in the ancient Mexican city, a woman’s lament was heard saying: “Oh, my little children. Where will I take you?

When the father of the family He would return home at sunset, when the last conch of the day sounded, his wife was waiting for him with food already prepared and hot. If the children were over fourteen years old and were studying at an educational institution, they also came home to share food with their family and then return to the telpochcalli to spend the night. The reunited family squatted to taste stews made from amphibian insects, small mammals, and migratory birds, Accompanied by beans, sauces, tamales and vegetables such as squash, chayote, nopal, purslane, tomato and quelites.