This is how the 14,000 employees of the Amazon operations centers in Spain work 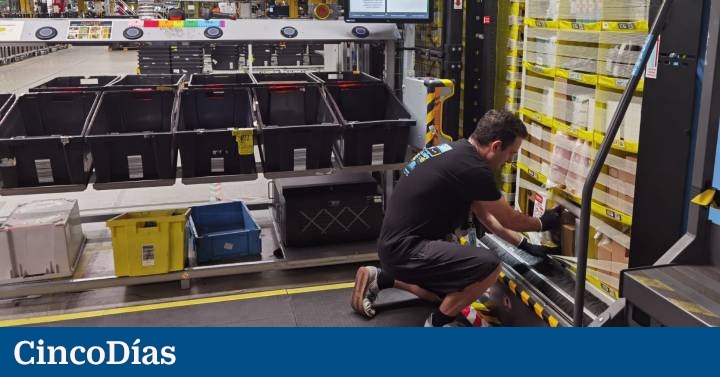 Amazon has been receiving harsh criticism for years about the working conditions of its workers, especially in the US, where the e-commerce giant has been repeatedly accused of stopping union mobilization. This week, the company invited several media outlets, including CincoDías, to visit its largest logistics center in Spain, located in Prat de Llobregat (Barcelona), where that day they were preparing 25,000 orders per hour (although they can reach 60,000 at times like Christmas). The objective? provide more details about the employment situation of their workers. The company employs 18,000 people in Spain, 14,000 dedicated to logistics operations.

In the center, with 63,000 m2 spread over three floors, more than 3,000 employees work side by side with 6,000 robots. The pace is frantic, because as explained by Marc Zenon, senior manager of Human Resources of some Amazon centers, between the click with which a customer of the company makes his purchase and the moment in which the package leaves the logistics warehouse, they should not spend more than two hours.

Manufacturers’ products are received and stored at the El Prat plant and prepared for subsequent shipment to other centers for delivery to the customer. The robots transport the shelves (there are 53,000 in the center) where the items are stored. They support weights of 1,500 kilos and move at a good speed around the ship reading QR codes with their cameras to know where they have to go and not collide with each other. At the time of the visit, 700 active robots were active, which were supervised by four employees.

Humans are not far behind either: they are in charge of loading and unloading those shelves that robots bring them, and packing shipments. Workers carry boxes of up to 15 kilos. Although they were asked, those responsible for Amazon did not offer data on accidents or absenteeism linked to occupational diseases. Zeno said that to avoid injuries, employees change functionseven on the same day. But Ana Berceruelo, general secretary of the FSC CC OO Madrid of the logistics sector, assures that many of the tasks that these workers do “involve repetitive movements that often cause problems. There are hardly any accidents, but there are many casualties due to low back pain, the elbow, the knees or the wrists”.

The Director of Labor Relations for Amazon in Spain, Alejandra Rodriguez, stressed that there is no company agreement in Amazon’s operations centers. “The provincial logistics sector is taken as a base, but we always pay above them, which means that in cities like Madrid and Barcelona starting salaries are around 1,700 euros gross per month”. The directive also assured when asked about whether they measure the productivity of workers (controlling, for example, how long it takes to store or package a product), that at Amazon workers do not have a variable salary associated with objectives.

Employees do not have an associated variable salary
to goals

“We don’t look at performance per employee. Workers are under no pressure to be productive and go faster or get more product out. There is a variable bonus for working on weekends or at night, but there is no bonus for productivity”, he noted, despite the fact that there are stopwatches in some workstations that indicate how long it takes the employee to place an object where it belongs. According to those responsible for Amazon, this information is not used to reward or punish the staff.

See also  Pokémon Legends: Arceus reaffirms its success, this time in Spain: it is the best-selling game in January

On these last two points Berceruelo gives another version. “It is not true that they pay above the provincial agreements. In Madrid, the salary for a newly hired specialist waiter without seniority is 21,000 euros per year. They only pay a higher salary in areas where it is difficult to find workers, as is the case in the center of Illescas, in Toledo. Also in San Fernando de Henares (Madrid) they pay more to old workers because they came from having their own company agreement before moving to the logistics one and there were strikes involved. The difference is that Amazon claims to offer the salary indicated in 14 payments.

Regarding the control of workers, the CC OO representative assures that “the company does have systems to measure the pace at which its employees work. “Many carry a PDA that tells them where to go for the products and what items to pick up, and the company is the one that establishes how long this process should take. If they determine that it should last 30 seconds and they go too far, it starts beeping. The worker who does not achieve the objectives is fired, arguing low productivity. That is the reality,” she says.

Throughout the center of Barcelona there are several areas with screens where the performance of the plant is analyzed. According to the company, from there it is also detected if there is any type of incident that is preventing the pre-established workload from being carried out.

One point on which the company and CC OO do agree is that Amazon has reduced temporary employment and increased permanent discontinuous employment. Berceruelo applauds him, but points out that it has not been by the company’s own will but because of the result of the complaints filed with the Labor Inspectorate against the company, “for exceeding the temporality established by the agreements”, and also due to the new labor reform , which sets more demanding limits in that sense.

The company assures that it does not look at “performance per employee”, but CC OO denies it

Regarding unionization, Rodríguez highlighted the good relationship they have with the unions. He assured that the number of union representatives is 195 and that of the 40 operations centers they have in the country, 15 have a works council; among them, six of the 9 first-mile logistics centers, which are the ones that employ the most workers.

According to the company’s calculations, more than 75% of the workers at its operations centers in Spain have union representation. Those responsible for Amazon clarified that by law the centers cannot promote union elections if they are not more than six months old and that the logistics stations are less unionized because they have much less staff.

Alejandra Rodriguez explained that in the last year 12 union elections were held, which mainly included new company committees, but also new union delegates. And she gave as an example of the collaboration they maintain with the unions the vote to renew an agreement with the committee of the center of Barcelona to be able to work on weekends. It was approved with 80% participation and 78.8% of votes in favor. It was ratified with the commitment that the company pay 45 euros for each Saturday or Sunday worked, in addition to giving a holiday during the week.

The directors recalled that last year The company promised to reach 25,000 jobs in 2025, and they detailed that currently 38% of its workforce is under 30 years of age, the percentage of women is 36% and workers come from 100 different countries (65 in the case of El Prat, where the most represented nationality is Spanish and, the second, Venezuelan). More than 1,000 employees are focused on IT and engineering, and more than 150 people work in positions related to occupational health and safety.

According to Marc Zenon, the robotization of centers “not only helps to be more agile, but also makes jobs safer”. He does not believe that robots affect employability, because as he pointed out, “the only one of Amazon’s large logistics centers in Spain without robotization is the one in San Fernando de Henares and it has 2,500 workers, less than here.” The manager admitted, however, that they have not calculated how many meat and bone workers they would need in the El Prat center if it did not have robots.

Regarding the obligation to reveal the algorithms for the organization of work, which established the so-called ‘riders law’, Rodríguez clarified that they have had several requests and that all the information on how they make hiring, rotation or hiring decisions has been shared. promotion with the unions. “It’s something we were already doing before the law. In addition, there is a lot of legend about artificial intelligence, but decisions about the impact on employment are still made by managers, taking into account quality and safety ratios.”

La Spezia, no-vax posters with swastikas against Costa and Locatelli