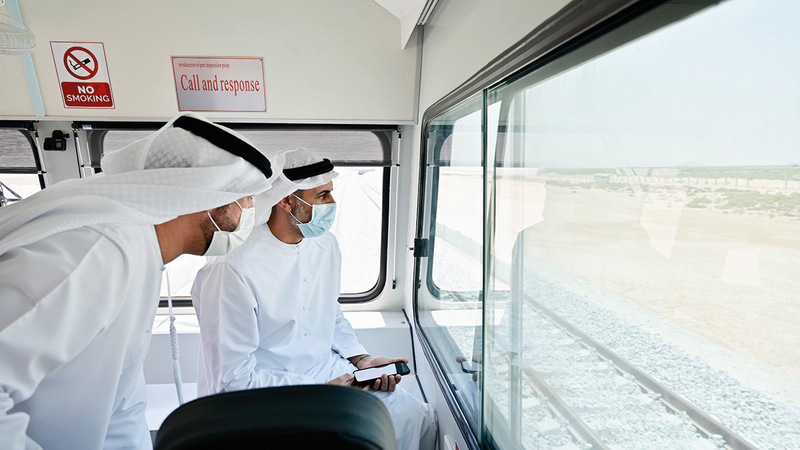 His Highness Sheikh Theyab bin Mohammed bin Zayed Al Nahyan, Chief of the Abu Dhabi Crown Prince’s Court and Chairman of the Board of Directors of Etihad Rail, inaugurated the laying of railway tracks in the Seih Shuaib area, which is the starting point for the track in the direction of both Abu Dhabi and Dubai.

His Highness was briefed on the project, through a trip by train designated to inspect and supervise the implementation of the network, from the starting point of the railway extension operations in the Seih Shuaib area in both directions towards Abu Dhabi and Dubai, on a 10-kilometre journey to the “Al Maha Forest”.

His Highness was also briefed on the measures taken by the company, with the aim of preserving wildlife and natural habitats, during the development phases of the project along the forest, including the construction of bridges, canals and animal crossings.

His Highness praised the leadership’s continuous support and diligent follow-up to the project, which enhances the efforts towards achieving the project many achievements, especially in terms of rapid progress in the construction operations that are currently taking place within the second phase of it, which consolidates the state’s position at the regional and global levels.

His Highness Sheikh Theyab bin Mohammed bin Zayed Al Nahyan valued the efforts of all concerned parties within the project, including federal and local authorities, to ensure the provision of full support for the project, which is a strategic pillar to enhance the country’s march towards the next 50 years.

His Highness stressed that this strategic national project will make a qualitative leap in the transport sector in the country, and is an essential element in the integrated system provided by the world-class transport sector in the UAE, placing it among the best countries in the world in terms of transport quality and infrastructure, in addition to its role in supporting economic growth. The National Bank, as it will connect the most important major ports with manufacturing and production points and population centers, which will positively affect the lives of citizens and residents in the country.

The development of the UAE National Railways project is proceeding according to the schedule and plans set for it, reflecting its importance in providing a modern and sustainable national railway network that enhances the leading regional position of the UAE.