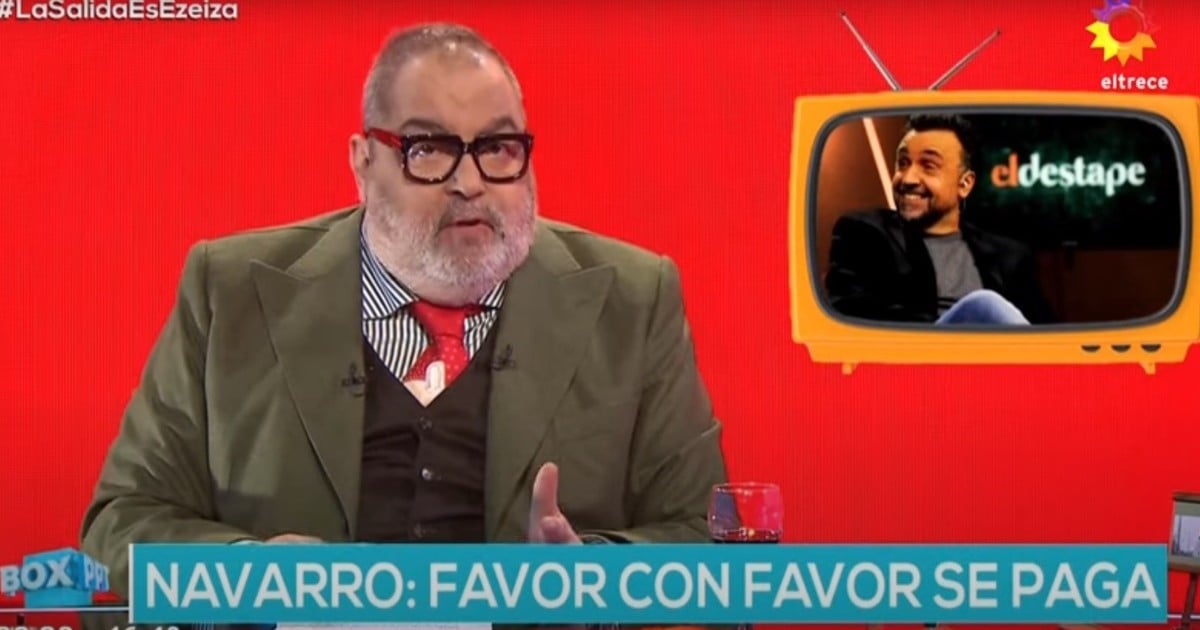 In Journalism for All, Jorge Lanata’s program, they revealed that the Government benefited from a “digital communication” contract to La Ñata Producciones, Roberto Navarro’s company, who lent his Kirchner website The uncovering to anticipate the videos of the Quinta de Olivos party.

Via the Télam agency, the communicator ultraK will be able to get more than 64 million pesos, regardless of the bulky figures that it receives from the official guideline and in a “digital communication” contract that can be renewed in one year.

“The distribution of official advertising is always discretionary. This week we discovered another: the excessive pattern and contracts for advertising content that it gives to the militant journalist of the K cause Roberto Navarro. And as the saying goes, favor with favor it’s paid“introduced Lanata, in PPT, to issue the report on the hiring and remember how the Olivos videos were disseminated.

And he expanded: “The award for produce government digital content In networks, the Navarro producer and another company that is dedicated to the field stayed. It is a ‘framework agreement’ for one year, which can be extended for another year. so Navarro could still take more silver than those initial 64 million pesos“.

The hiring of the producer Roberto Navarro.

Is that site K The web uncover, from Navarro, did the Government the favor of advancing the broadcast of the video of Fabiola Yañez’s birthday so that it would not be known closer to the elections.

“The favor was repaid with another favor,” they said in the PPT report, published in Lanata’s monologue. In June, through the Télam agency, the Government authorized the Navarro production company, La Ñata Producciones, a contract for 64.8 million pesos together with another company, Geo Media, to make digital communication of achievements of public management, as revealed by the site El Disenso.

In the investigation, they recalled that Navarro created La Ñata Producciones SA in 2015, and he put his two children, Nicolás and María Florencia, as partners.

In fact, María Florencia, 37, is listed as president of this firm. “Despite not having a greater background in the advertising field, it kept the advertising contract with the Government and beat other firms with a longer experience in the market,” they said from PPT.

Due to the type of contracting, as it is about different government advertising pieces and campaigns on social networks and online sites that must be carried out by his production company and the other firm, Navarro can get to pocket more of the contract money, since can be extended for another year.

The PPT team went to the producer’s home at 2300 Thames Street in the Palermo neighborhood, but no one was there. Navarro and his son Nicolás, director of La Ñata Producciones, were also contacted without success. The journalist did not respond to the telephone and message consultation, and his son did not give further details of the contract with Télam in response to the PPT call, and cut the call.

Navarro had a very strong growth as a media entrepreneur from the official publicity he received during the previous administration of Cristina Kirchner and in the current government of the Frente de Todos.

The National Media Secretariat gave his site El Uncover Web $ 32 million. Was the fourth news site website that received the most advertising behind Infobae, La Nación and ClarínDespite having a much smaller audience, and Navarro’s other business, Uncover Radio, received another $ 14 million.

Lanata recalled that last week he had disclosed the payments to Enrique Albistur’s companies. “In 2020, the Government gave 35 million pesos to its public signage companies, much more than to its competitors.” The journalist recalled that Albistur is “a close friend of Alberto and husband of the candidate Victoria Tolosa Paz.”

“We continue to discover visits to Olivos during the quarantine,” announced Lanata in her monologue in the “Night” section at the presidential residence. And he revealed: “For example, that of Yamila Chamma, Plastic Surgeon“.

“Chamma was there on May 4, 2021 for 5 hours“Lanata said and joked with a photo of the President:” We already know that for him it was not. “

Lanata contributed another piece of information: “There was 148 visits related to hairdressing, fashion, exercise, coaching and aesthetic services “, in Olivos, during the quarantine.” It seems that in addition to being a party room, it also functioned as a spa, “Lanata said ironically.

The PPT host also revealed the income of another friend of the first lady to Olivos. Is about Claudia silvero that “entered 15 times in total and even celebrated his birthday with their children on November 15, 2020, “he explained.

But there was another moment that caught Lanata’s attention: “It was the meeting that the August 31. That same month, Claudia casually got a job in the Yacyretá Binational Entity, “said Lanata and wondered: Have they come together to celebrate the new labour? “

Lanata showed a photo of Silvero and another friend of Fabiola Yañez, Agustina Alfonzo “hanging poor dylan, who no longer knows how to crack Olivos. “The presidential dog was also the protagonist of the photo that confirmed the scandal that ended with the first lady and the President indicted in a legal case.