They raided the house of a Buenos Aires official by mistake: they investigated the police for abuse of authority 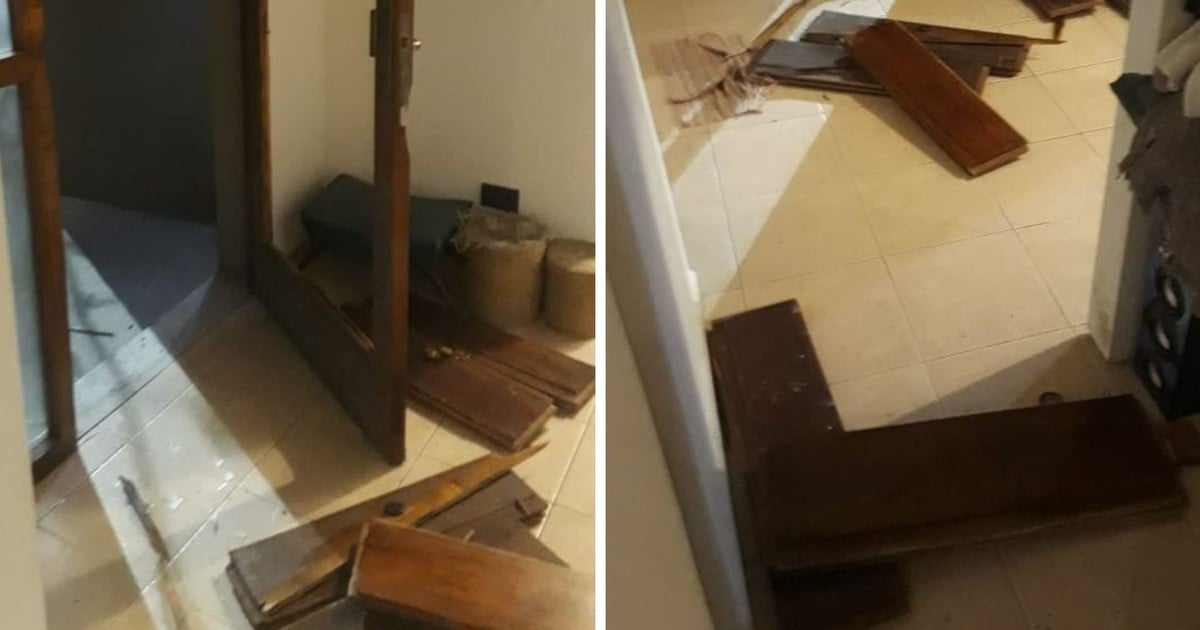 A police raid on a home where they could not find what they were looking for led to the opening of a case for alleged “abuse of authority” against the agents who participated in the operation.

The police procession entered a house to advance an investigation for theft and for that the agents broke an expensive door and they pepper sprayed a dog.

After the violent deployment, they discovered that they had entered the wrong address. The property belongs to a career officer of the Ministry of Security, who lives with his wife, also an employee of the portfolio led by Sergio Berni.

This is how the door of the official’s house remained after the raid.

The property search was “negative” according to the official report sent by the officers to the judicial authorities that authorized the search.

The suspicion is that they did not find evidence at the place because it was a wrong address. As it turned out, the owners of the house raised a harsh claim for the procedure, since they assured that the policemen acted with great violence.

Everything happened this morning in 132, between 429 and 430, in Villa Elisa, north of the provincial capital. The intervention began in the first minutes of the morning. A group of at least four agents entered through the garden of the official’s house.

Images of the operation show that the agents used a metal ram they broke down the front door and the review of each of the environments began.

The owners of the house reported that the agents broke down the door with a battering ram and pepper sprayed a dog.

A robbery that occurred on June 5 in a nearby farm was being investigated. At dawn that day, two men scaled a wall, broke glass and took cell phones, computer equipment and other valuables.

Based on a report made by the telephone company, the place where the cell phone was “geolocated” was detected. The information indicated the home of the Ministry officials. The patrol of the Direct Action Group (GAD) from the department of La Plata went to that place.

The judge’s order required them to search for two cell phones, a play station, backpacks, sneakers and a pair of gold rings, all stolen at dawn on June 5.

But they found nothing. And it is presumed that the performance of the men of force was excessive. “A raid can end without the expected result. It is within the scope of any criminal proceeding. But they cannot be exceeded. They can’t break everything”, He explained to Clarion a source of the Platenses Courts.

For this reason, the judge who authorized the search, Federico Atencio, of the Court of Guarantees 1, filed a complaint for alleged abuse of authority. This magistrate had signed that decision at the request of the prosecutor’s office involved in the robbery of the fifth house, Ana Medina.

In the Ministry of Security they said that “everything was done under the supervision of Justice” and remarked that “the police officers acted by judicial decision”.

However, they did not rule out the possibility of initiating an administrative summary with the intervention of Internal Affairs if alleged irregularities arise from the file.

The house that was searched for an alleged error belongs to the deputy director of the Public Registry of Administration and Permanence Controllers (Recap), a unit in charge of the habilitation of nightclubs.

His wife also works as an administrative officer at the Ministry’s headquarters, on Calle 2 and 51 in the Buenos Aires capital.