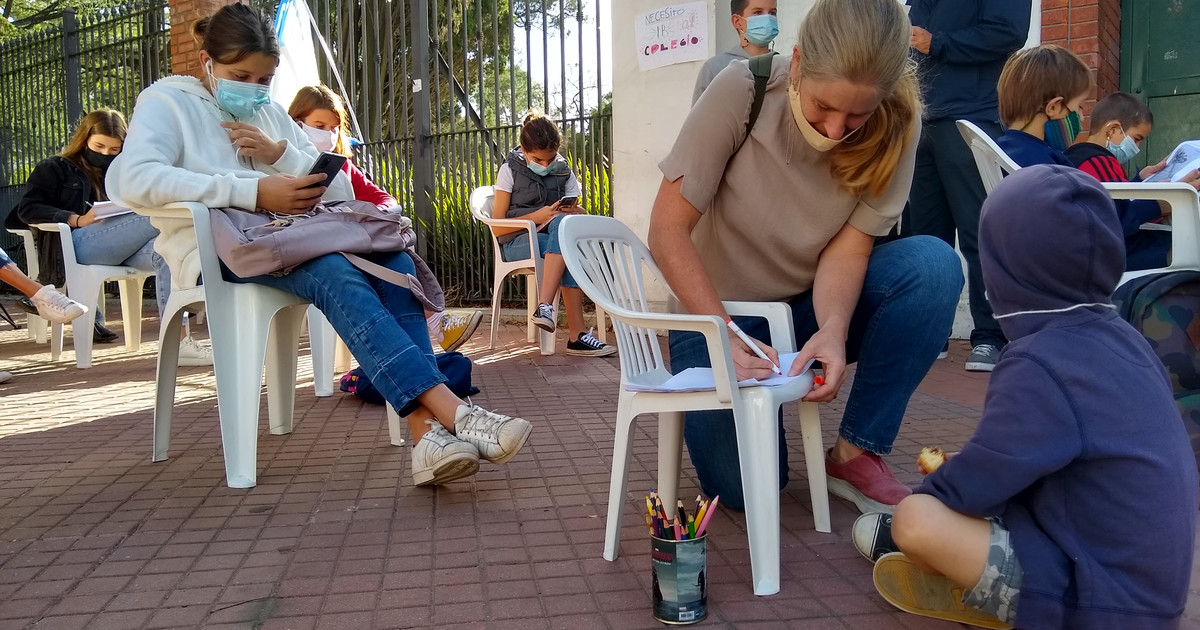 Three days after the multiple claims, in the Northern area of ​​the Greater Buenos Aires, for the return of the presence to the classrooms, a group of mothers and fathers decided to join together to convene a open air class Front of Quinta de Olivos.

At 9 o’clock in the morning, the sidewalks of Maipú avenue on the presidential villa simulated a classroom. With slates, chairs, overalls and task notebooks, the families demonstrated against the measures adopted by the National Government to stop the rapid advance of the second wave of coronavirus in the AMBA.

Something similar had happened days ago, when a flag in the same place and other points of the GBA, so that the restrictions on face-to-face classes would be reversed. Since then, the political tension has been in crescendo between the head of the Buenos Aires government, Horacio Rodríguez Larreta, who had presented an appeal and failed to comply with the suspension of classes in the City, and President Alberto Fernández.

A similar path was followed by the mayors of Vicente López (Jorge Macri) and San Isidro (Gustavo Posse), although the Buenos Aires Justice has not yet issued on the presence in the Province. The debate, yes, jumped from politics to educational community of several schools in the North area.

At nine o’clock, on the Maipú avenue, there was already a mega operative Police deployed with several uniformed troops, two trucks and a patrol car. The summoned relatives and children, who belonged to both private schools and public schools, joined “do homework and meet your classmates“.

“The boys get together to do their homework only. It is a public act so that let’s defend education, that is the only thing that makes us equal between the different social sectors. Equal opportunity is given by education “, he explains Christian, one of the parent organizers of the meeting.

From 9 am, students of different ages do homework in front of the presidential residence. Photo: Luciano Thieberger.

And he adds: “The idea is that we become aware as a society. It does not matter which schools we are from. It is on behalf of all: a situation of parents who came here and decided to organize this as a way that they see that we care about the education of our children and across the country. “

The mother of a student present at the scene held Clarion: “Virtual education unequal, because not everyone can have an educational process with their peers and teachers in the same way. There are people who do not have that possibility. We have no idea how many are coming today. Alone we want you to see the boys’ faces and the desire they have to learn “.

For his part Clear (11)One of the girls present said: “Last year it was very difficult for me to learn through Meets and it seemed very difficult. And if they close now I feel that it will be the same all year. What I miss the most about school is that the signs respond faster and I miss being able to do jobs with friends. I feel like I learn a lot less than in virtual school. “

The mothers and fathers explained they went to “do homework” and review content. Photo: Luciano Thieberger.

As the morning progressed, more and more parents and students joined. Sofia, one of the organizers, confirmed that This modality will be replicated every next day until April 30.

“The idea is that they get together to do their homework, that they meet with their friends, calm down. But that they are no longer locked up at home. We plan to do it. for the remaining ten days and hopefully a lot more people from all the schools will join in. “

On Vicente Lopez, where the mayor Jorge Macri was one of the first to present a judicial protection upon learning of the decision to suspend face-to-face classes between April 19 and 30, the ruling party is expected to present a alternative proposal to public transport to show that students can reach schools without risk of adding traffic flow to the collective.

From early on, a major police operation was deployed in front of the Quinta de Olivos. Photo: Luciano Thieberger.

In other districts governed by Together for Change, such as San Isidro or San Miguel, education was declared service essential audience after the presidential decree that reduced circulation between 8:00 p.m. and 6:00 a.m., and suspended classes due to the alarming increase in coronavirus infections and the saturation of therapy beds in hospitals and sanatoriums of the AMBA.

Saunas | Helsinki’s Sompasauna will receive departure passports in June: “It’s starting to be a security risk to spend time in the area”