They found out why gorillas beat their chests 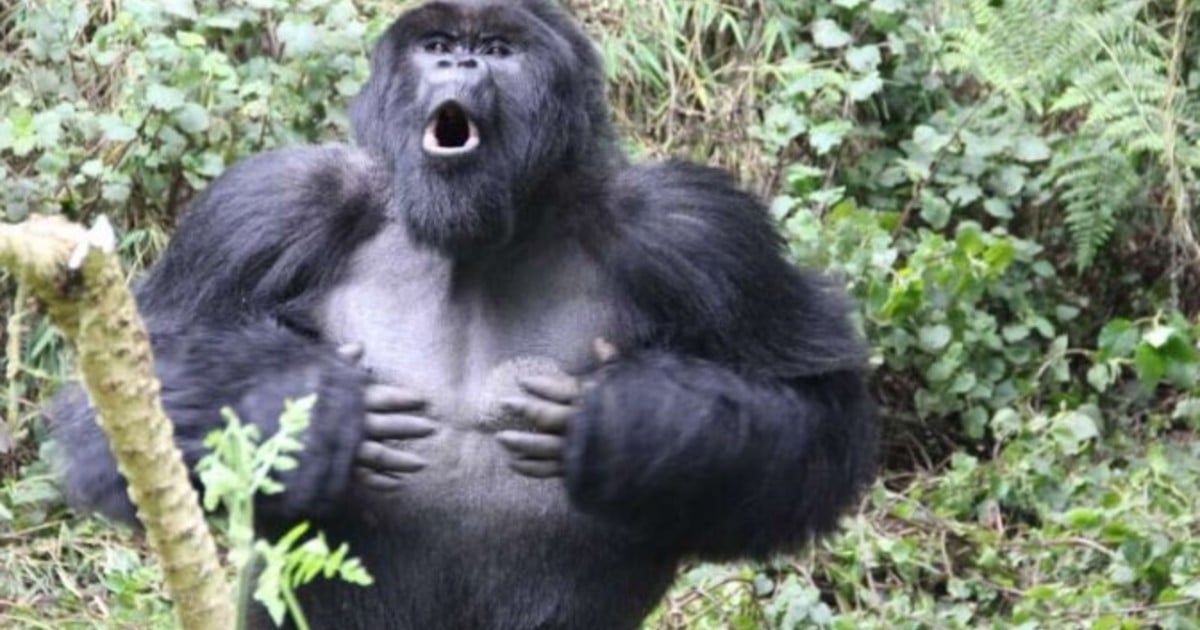 Male gorillas beat their chest as an acoustic indicator of your body size Y its competitive capacity against rivals and females, as revealed by an international study published today in the magazine Scientific Reports.

The work has revealed the hidden meaning of the iconic blows to the chest of mountain gorillas, whose larger and more competitive specimens emit lower sound frequencies, that is, more bass sounds, with which the size of the gorilla is encoded in the sound message.

In the research, directed by Edward Wright and Martha Robbins, from the Max Planck Institute for Evolutionary Anthropology, Jordi Galbany, professor of the Faculty of Psychology of the University of Barcelona (UB), as well as experts from the Dian Fossey Foundation, the George Washington University and Goethe University in Frankfurt.

It was found that they do it every 20 hours against rivals and females for two particular reasons.

Researchers have discovered a correlation between gorillas’ body size and the frequency of the characteristic sounds of their thorax blows.

According to the study, this visual and acoustic signal reliably indicates the gorillas’ body dimensions to their social group (males and females), and also to other gorillas from neighboring groups.

The work has studied a dozen social groups of mountain gorillas in the Rwanda Volcanoes National Park, a reduced habitat and well known thanks to the American primatologist Dian Fossey.

The mountain gorilla (Gorilla beringei beringei, one of the great African apes that inhabits the volcanic slopes of the Albertine fault, is an endangered subspecies of which they remain less than 1,000 copies in the Bwindi Impenetrable Forest National Park (Uganda) and the Virunga Mountains, between the Democratic Republic of the Congo, Uganda and Rwanda.

Until now, it was thought that blows were associated with competition between males and the process of group selection by females, but the type of information communicated was still unknown.

THE MOTIVES OF THE GORILLA

The work has confirmed that the strategy of blows to the thorax is a reliable indicator of gorilla body size and reveals their competitive capacity with respect to members of both their social group and others.

It indicates your body size and your competitive ability against rivals and females.

According to the researchers, the anatomy close to the larynx of larger males reduces the frequency of the sound these apes make while beating their chests.

Thus, rival males may be intimidated by the sound of such blows (which can be heard a kilometer away) and would choose to avoid fighting with the sending male, while the females could use the information to choose a partner.

“The behavior of the blow to the chest is typical of adult male gorillas and has always been described as a show of force related to social status and threatening behaviors”, explained Jordi Galbany, Professor of Psychobiology at the UB.

“This behavior (he adds) is the climax of a demonstration: the gorilla begins to make vocalizations similar to short howls, stands up and runs on his legs while striking his chest hard with the palms of both hands alternately, producing a impressive sound, like the roll of a drum. “

“Male gorillas beat their chests once every twenty hours of observation, but they can do it every few minutes when they interact between two groups “, has detailed Galbany.

Researchers have also found that this behavior is more frequent on days when there is a female in heat.

The team recorded the gorillas’ chest blows to analyze various sound parameters (duration, number of blows, emission frequency) and studied the width of the back of each animal using non-invasive photogrammetric techniques, a task in which they participated directly. Galbany during four years of field work in the Volcanoes National Park.

“Other species of great apes can also communicate at a distance by means of non-vocal acoustic signals, such as chimpanzees, which use the buttresses of trees as a drum and emit a wide range of communicative signals with different durations and characteristics”, Galbany pointed out. .

Oliveros: "The goal is to be three-time Uruguayan champion"