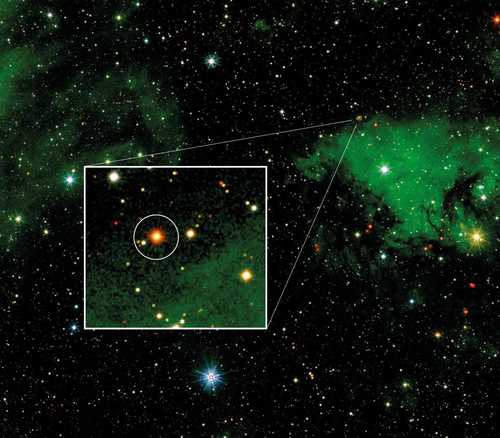 Called 2MASS J20395358+4222505, its luminosity is close to a million times that of our star. However, the most disconcerting thing for the researchers is a variation in its speed of 60 kilometers per second, surprisingly high for its dimensions.

The object, which was already part of different astronomical catalogues, has been observed with great precision and detail thanks to the Megara instrument, installed in the Gran Telescopio Canarias (GTC or Grantecan). The study is published in the journal Monthly Notices of the Royal Astronomical Society.

The star 2MASS J20395358+4222505 is located near the heart of the nearest massive star-forming region, Cygnus-X, about 5,700 light-years from Earth. However, it is an unknown stellar body. The reason for its near-anonymity is that it lies behind dense clouds of gas and dust that reduce its visible light nearly 10,000 times before reaching us. In this way, what would be intrinsically a star of magnitude 4, perceptible to the naked eye (the eye reaches up to magnitude 6) is just one more entry in the catalogues, a body of magnitude 14 (in astronomy, the brighter a minor star is its magnitude).

Due to its peculiar characteristics, J20395358+4222505 was observed during the fine-tuning of the Megara multi-object spectrograph after its installation at the GTC, located at the Roque de los Muchachos Observatory (Garafía, La Palma). The result has been triply revealing for the researchers.

First of all, the star has turned out to be a powerful blue supergiant. Since its luminosity approaches a million times that of the Sun, it is one of the most massive and luminous stars in the Milky Way. Second, it is in a rare phase of evolution, approaching the end of its life on the main sequence (where stars spend 90 percent of their lives) and about to undergo major changes that will transform it. The researchers believe that it will probably become a blue hypergiant, of which very few are known in the Milky Way.

The third surprise, the most unexpected, is that it seems to vary its speed extraordinarily. Two observations made on consecutive days show a speed change of up to 60 kilometers per second. That it is so high in a star of such great mass implies an enormous gravitational influence that forces it to move so quickly. The researchers consider two possible explanations: a comparable star or a compact object (neutron star or black hole) as partners in a binary system. However, the observations show no sign of a companion star, further narrowing down the options. If it were a compact object, the parent star should have been one of the most massive in our galaxy.

See also  Roquin: this is how it controls the work of immune cells

“At the moment, we have already discovered that it is a blue colossus hidden behind a wall of interstellar gas and dust, astronomically, in the garden of our house,” explains Artemio Herrero, professor at the University of La Laguna ( ULL) and researcher at the Institute of Astrophysics of the Canary Islands (IAC) who directed the study.

“New observations are necessary to unravel the true nature of J20395358+4222505, whose history, both in the past and in the future, will place it as one of the most peculiar objects in the galaxy”, adds Sara Rodríguez Berlanas, a researcher at the University Alicante, who was a doctoral student at the IAC/ULL, and co-author of the article. The new observations should confirm the velocity changes and allow a possible orbit to be determined. The last Cabildo session showed that they are allergic to criticism