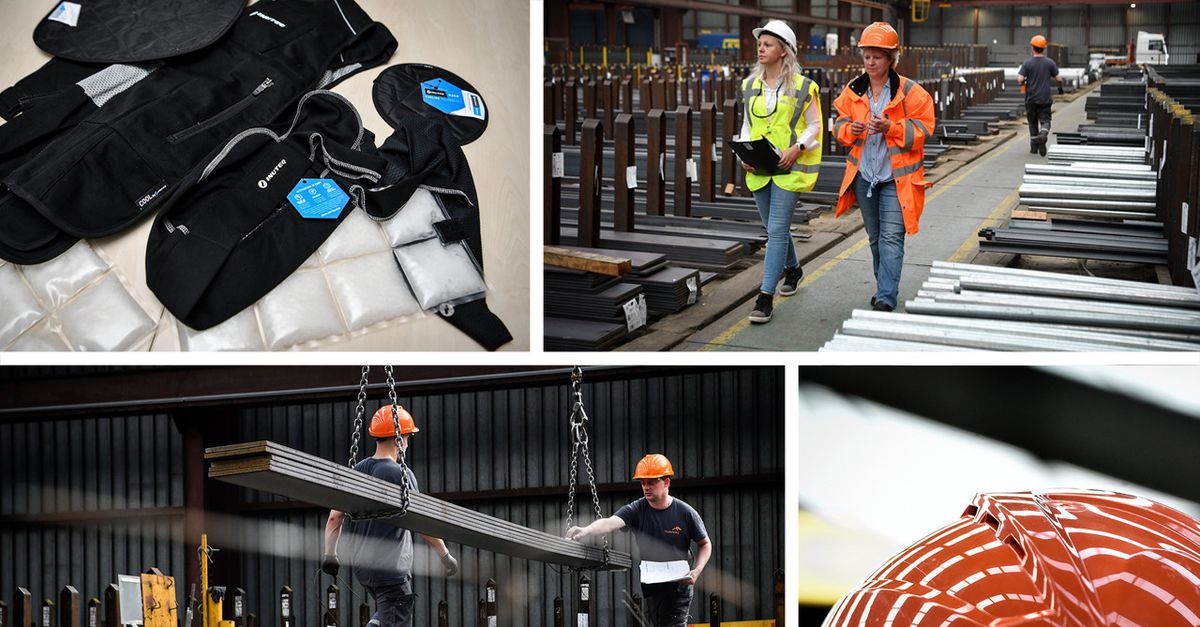 Hilde Kuipers puts on her helmet and also puts on her orange coat and safety shoes. Only then does she enter the steel storage shed. “Our men here don’t complain so easily; they are used to it. But during the hot summer days it can get very hot in the shed. We are now exploring how to keep workers comfortable, alert and productive on those days.” Kuipers is a quality, health, safety and environmental manager at steel trader ArcelorMittal in Deventer.

In the gigantic warehouse, the floor is filled with long strips of steel that are sorted by type; angle irons, T irons and further on are the flat irons. Two men in orange helmets lift a steel strip and tie it to a chain hanging from a crane. “They are already preparing the steel that is taken by the trucks,” says Kuipers, extra hard to make themselves understood through the hearing protectors. Trucks drive in and out and there are large machines. Now a cool breeze is blowing through the shed, but during last year’s heat wave it was above forty degrees. Kuipers points up to a man who rolls over rails on the ceiling in a crane. “It gets much hotter there, heat rises. Fortunately there are air conditioners in the taps, but to get there they have to climb all the way up. Very heavy when it is hot.”

Those periods of extreme heat are becoming more frequent and lasting longer. “More and more employers are knocking on their door for advice,” says Heleen Bakker. She is an occupational hygienist at Arbo Unie. Employees who work outside, or in workplaces where it is very hot – such as bakeries – or who perform physically demanding work are especially vulnerable.

The indoor climate in this warehouse cannot be controlled

The ArcelorMittal warehouse in Deventer is typically such a vulnerable workplace, says Bakker. “The heat load for the workers in this type of situation is determined with three thermometers (wet bulb globe temperature).” One measures the temperature, with a black sphere the incoming radiation is measured and a thermometer with a wet sock around it measures the temperature to which a perspiring body can cool down. Furthermore, the clothing that the people wear and the individual heat sensitivity of the employees are taken into account. Bakker: “The indoor climate in this warehouse cannot be controlled. You can’t just turn on the air conditioning, that makes little sense in a large warehouse where trucks drive in and out all day long. The machines make it extra hot and the employees are also obliged to wear protective clothing: shorts and airy shoes are not an option. In addition, the employees here do heavy physical work.”

Read about living during extreme heat: When it gets too hot for warm-blooded people

Heat in the workplace poses two major problems. “The first is the decline in labor productivity,” says Hein Daanen over the phone. He is professor of thermophysiology at the VU University Amsterdam. “Productivity decreases by 2 percent above twenty-five degrees Celsius for each degree of temperature increase.”

“The second effect that heat has is a worsened alertness,” says Maria Hopman, physiologist at the Radboud University Medical Center in Nijmegen. “Of all the energy released during work, about 20 percent is used to do the work and the other 80 percent is converted into heat.” The body tries to get rid of that heat through the skin, but it cannot if the clothing or the environment is too warm. Then the body temperature rises. The enzymes that regulate all functions in the body, such as brain functions, then work less well. In addition, the blood flows less well when dehydrated through perspiration, also to the brain. “Your concentration is declining. When you exercise for an hour, cool down and drink enough water. But when you work, you are exposed to those conditions for six or eight hours. That increases the chance that mistakes will be made.”

In Deventer an employee pushes a large welding machine on a cart into the shed. He is busy, because he has to maintain all the machines here. “With all those machines and metal constructions, if a mistake is made here, it can really go wrong,” says Kuipers.

“To prevent accidents, we started a few years ago with things that you naturally do in heat,” Kuipers continues. “We make sure that the employees drink enough water and on the very hot days we adjust the work schedules to avoid the afternoon hours.”

This is according to the guidelines of the National Heat Plan of the RIVM. “There is no legislation regarding workplace temperature,” says thermophysiologist Daanen from Amsterdam. “Except that the work must not be harmful to health. There were once hard standards, but they have been scrapped due to social pressure to simplify the working conditions law.”

But according to Hopman, a physiologist from Nijmegen, these hard regulations are also not desirable. “It is tailor-made: every company has different needs and different types of work are performed everywhere. Employers and employees must come up with the best solutions together.”

That’s exactly what they do at ArcelorMittal. “We are now at a point where, in addition to the heat measures taken by the RIVM, we are making structural changes ourselves to deal with the increasingly extreme heat,” says Kuipers. “For example, our work clothes.” From a box she takes black vests, bandanas, wristbands and sleeves. “You can immerse it in cold water and you can put cooling elements in the vest. You wear these items of clothing under your safety clothing and helmet. We are still in the experimental phase. Together with the employees, we look at which clothing cools the best and which employees can still work well.”

Daanen has another tip: “It can help to reward your employees if they make sure they stay cool themselves. In the German mines, employees were allowed to work longer if they wore an ice vest. And those who worked longer were paid more.”

Three people are stabbed and five injured in Germany