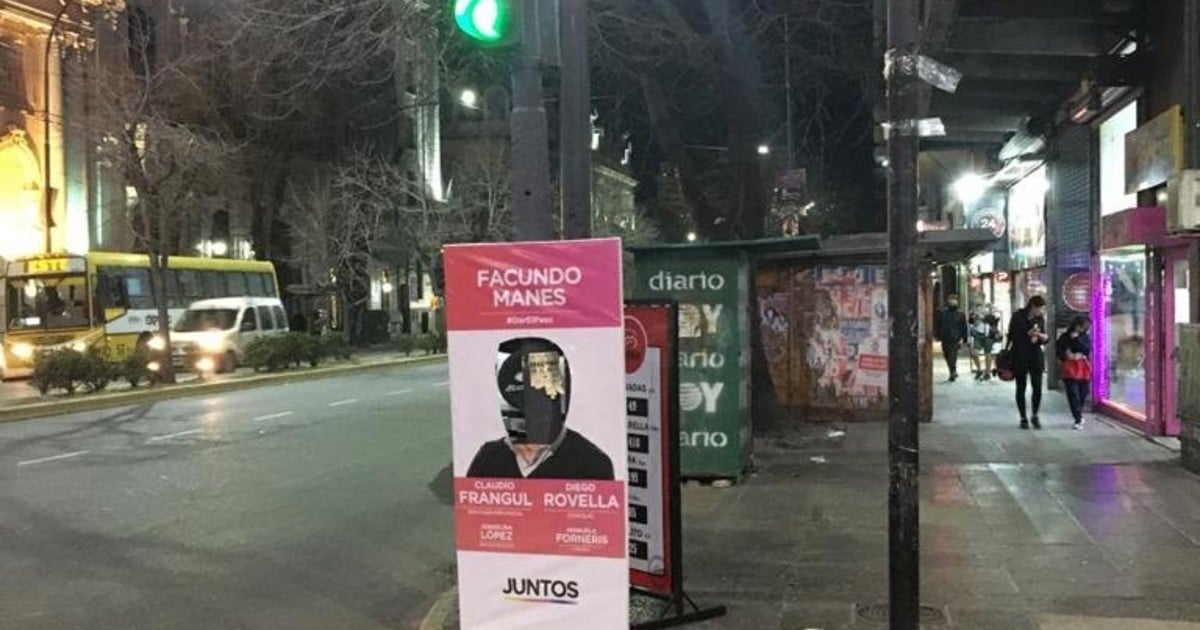 The internship of Juntos in the Province of Buenos Aires between Facundo Manes and Diego Santilli had a beginning with a lot of verbal fireworks, accompanied by a later armistice. Now, an incident in La Plata threatens a new escalation of the conflict.

Close associates of the neuroscientist denounced before the Federal Justice the destruction of more than 100 campaign posters of its space in various points of the Buenos Aires capital.

This generated a spicy intersection in the networks between Manes and the macrista mayor Julio Garro, who supports the candidacy of Diego Santilli.

“Hundreds of banners appeared vandalized in La Plata. The missing image is that of Facundo Manes, the candidate that more and more Argentines are accompanying to #DarElPaso towards a better country. We repudiate this unacceptable attack on democracy“, they published in the networks from the Committee of the Province of Buenos Aires of the Radical Civic Union (UCR).

Facundo we are on the same path. You can count on our help to find those responsible. I have talked about it with many of the members of my team who are active in your space. From Together we have to put an end to these outrages. https://t.co/HBSdgaXy3B

The claim of the networks reached the Justice. The candidate for provincial deputy Claudio Frangul, who is part of the “Dar El Paso” list with Manes, who will compete in the PASO with the payroll headed by the macrista Santilli, specified that the complaint was presented before the federal court of La Plata.

“As much as they want to scare us, what is being generated is unstoppable. More and more of us encourage ourselves to #DarElPaso. Julio Garro we count on your help to find those responsible for the same practices as always, “Manes posted on his social networks.

And Garro answered: “Facundo, we are on the same path. You can count on our help to find those responsible. I have talked about it with many of the members of my team who are active in your space. From Together we have to put an end to these outrages“.

Hundreds of banners appeared vandalized in La Plata. The missing image is that of @ManesF, the candidate that more and more Argentines accompany to #DarElPaso towards a better country. We repudiate this unacceptable attack on democracy. pic.twitter.com/CeVWVg1icI

Among the arguments, from the UCR they consider these events to constitute “political violence”. “The judge was asked to determine if there is an electoral crime, since we cannot allow these acts of political violence; to the Facundo Manes cartels they literally cut off his head. This is in addition to the more than 100 parades that destroyed days ago and the threats suffered by young militants who were at a debate table in Los Hornos, “said the radical leader.

After the breaking of posters and the complaint, the publication addressed to the macrista communal chief arrived and now another request reheats the inmate. The thing is Frangul confirmed that they will require Mayor Garro to provide the images of the security cameras of the places where the events were committed “so that it can be determined who was responsible.”

Garro, a member of the PRO, supports the candidacy of Diego Santilli. Nine days ago he received Santilli, the president of the PRO, Patricia Bullrich, and the candidate for provincial deputy for the Eighth Electoral Section, Fabián Perechodnik, in a ceremony at the José Hernández club.

The candidate for national deputy Diego Santilli in La Plata together with the mayor Julio Garro. Photo: Mauricio Nievas

“We have received some communications from other political forces and we are very grateful. When these situations of political violence exist it is very important that we repudiate them from all sectors,” Frangul said.

For his part, the pre-candidate for councilor Diego Rovella considered that what happened is part of “the old politics” and evaluated that the figure of Facundo is being attacked because represents new air that comes to end and put aside these mafia policies. “

The neuroscientist launched his proposals towards the 2021 Simultaneous and Compulsory Open Primaries through a letter where he assures that the axis will be set on “the Knowledge Revolution.”

“Our great bet as a nation must be knowledge. We have to put education and technology as engines of a project that generates opportunities and transforms Argentina so that we can dream and have a horizon of prosperity,” said Manes.

“Argentina is capable of great transformations. For that we must do things in an absolutely different way and start a profound transformation of the entire educational system, investing in knowledge and job training that allows improving the income of families and that the economy is once again competitive and relevant globally, “concluded Manes.