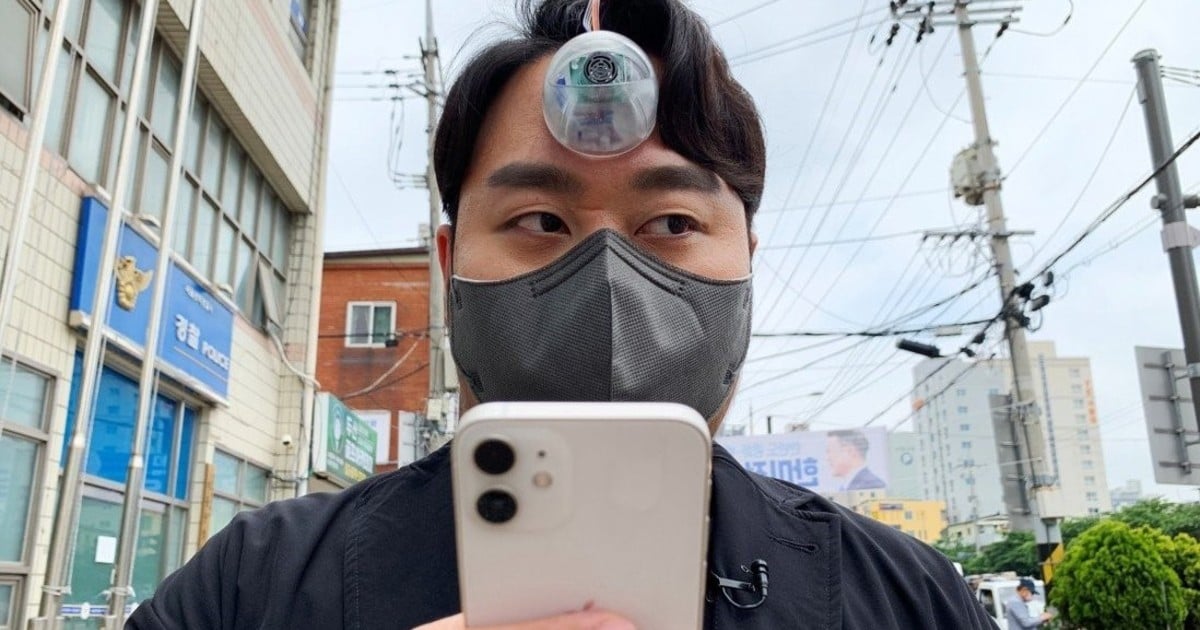 A South Korean industrial designer came up with a solution for smombie, cell phone zombies. Namely, a person unable to take their eyes off the mobile, even walking on the street.

The creator of the so-called “third eye” is Paeng Min-wook. It is a device with two sensors that is placed on the forehead and acts as a guide while the user keeps his eyes on the screen.

The invention consists of a robotic eyeball that is held on the forehead by an elastic band.

Paeng’s invention uses a gyro sensor to measure the oblique angle of the wearer’s neck and an ultrasonic sensor to calculate the distance between the robotic eye and any obstacles.

Both sensors are connected to an open source single board microcontroller. The entire system is supplied through a battery pack.

The robotic eye mechanism begins its activity every time the user lower your head, whether on the street or in the office, to look at your mobile. At that moment the ultrasonic sensor is activated, which is capable of detecting objects two meters away.

Ultrasounds are a series of mechanical waves, generally longitudinal, whose frequency is above the hearing capacity of the human ear.

Ultrasound equipment operates with frequencies higher than 20 kHz although most of the transducers currently used operate at much higher frequencies.

The device uses a gyro sensor to measure the oblique angle of the user’s neck and an ultrasonic sensor.

If the system interprets that the user is about to collapse against an obstacle, an alarm is triggered that is increasing in intensity as it approaches the object.

The two sensors are linked to Arduino type board programmed to receive this data and that controls the whole system.

Paeng refers to Phono Sapiens, the new human species born of smartphones, with which today it is very difficult not to come across as we set foot on the street.

For this reason, the designer ensures that the robotic eye is the “first evolution” of our species.

“Since we can’t take our eyes off smartphones, an extra eye will be needed in the future, “Paeng told the South China Morning Post.

Paeng said that the third eye was intended as a warning, not as a real solution for smartphone junkies who don’t pay attention to where they’re headed.

Although for now the designer has no intention of commercializing his invention, the reality is that the robotic eye has caught the attention of many curious people.

Of course, for those interested in this type of project, at the moment, he only plans to develop an application linked to the camera.

He acknowledges that it is a “satirical solution” and “I hope that serves to raise awareness about the seriousness of addiction to gadgets, and to look at oneself and recognize the problem “.

With information from Reuters.