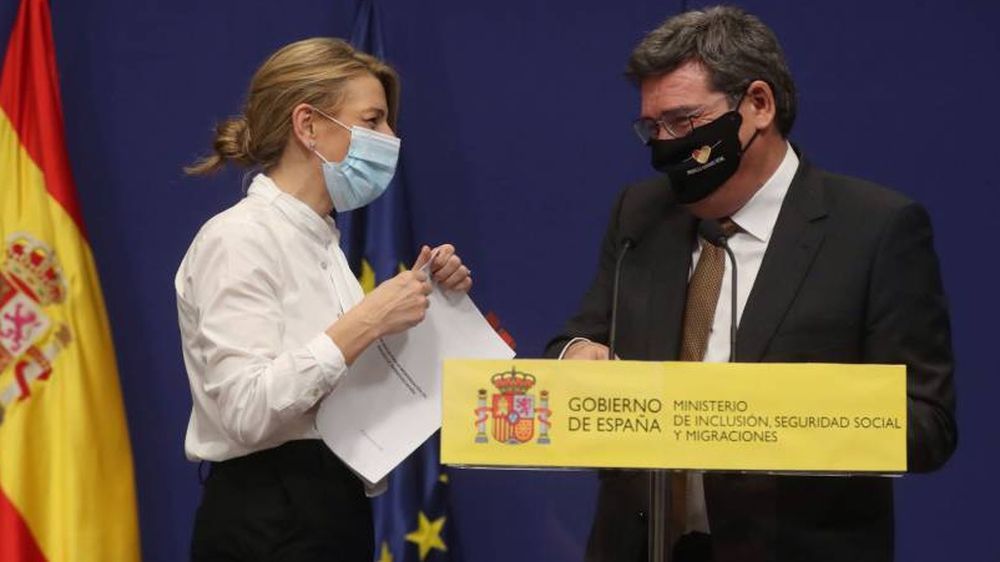 The Government has already sent its plans for the labor market and pensions to Brussels this week. They were the two files – of 30 – that he had yet to send to the European Commission to start receiving the 70,000 million recovery plan. It has not been easy to find an agreement between the two partners that make up the coalition. In fact, it cannot be said that there is a common point in pensions. The extension of the calculation period of pensions – now without specifying – is still proposed. Yes, there is a meeting text, with some ambiguity in the wording, in the labor market.

The ambivalent text that is sent to Brussels on labor matters may satisfy the third vice president, Nadia Calviño, and the labor minister, Yolanda Díaz, the two faces of the clash of positions that has occurred within the Executive. But it is also true that the enumeration of the aspects that are proposed to be reformed and the starting point – the labor legislation that the PP left in 2012 – lead to the conclusion that the changes can only go in one direction: the one indicated in the pact of Government reached at the end of 2019.

The realization of the proposed changes will come in the social dialogue and the Parliament, since the texts delivered to the social agents this Tuesday, to which EL PAÍS has had access, leave enough room for negotiation.

Some of the changes to which the Government has committed, in reality, have already materialized, such as the teleworking law or the development of equality regulations. But there is more. These are the most important points raised:

Fight against temporality. 37 years after temporary contracts were facilitated, Spain continues to suffer from the abuse of the eventuality. Since then, almost all labor reforms have been justified with this argument: reducing temporary employment, which occurs in 25% of the salaried population. But success, so far, has been limited. The recipe that the Government puts on the table to combat this excess of eventuality is to demand a clearer justification when hiring on a temporary basis.

A tripartite fund for ERTEs. After the experience of the ERTE (Temporary Employment Regulation File) during the pandemic, the Executive considers “establishing a permanent model” with the lessons learned. The ERTEs are not a new mechanism in labor legislation, but the extraordinary regulation and the accompanying aid have favored their use in recent months. Along these lines, the Executive proposes “a tripartite fund” (Government, unions and employers) to finance the benefits and compensation of workers’ contributions in ERTE. Also strengthen the training of those affected.

Changes in the agreements. This has been one of the points that has caused the most friction within the Executive. To address the problem, an ambiguous wording has been chosen: “address […] the ultra-activity of agreements, the relationship between sectorial and company agreements, and consultation and negotiation mechanisms in cases of substantial modification of working conditions ”. Nothing says in what sense the Government intends to “address” these points, but it is also true that the starting point is the 2012 labor reform, which in the “relationship between agreements” gives all primacy to the company. In other words, it is probable that the changes will favor the sectoral agreements, as the Government pact says. The same can be said of ultra-activity, (extension of the agreements until their renewal), which in 2012 was limited to one year. The realization, as in all aspects of pensions and the labor market, will come in social dialogue.

Curbing precariousness in outsourcing. Changes in the regulation of the working conditions of companies have been an open topic for years. The last legislature was about to achieve a change. Finally it was not possible. Now the recent ruling of the Supreme Court on work or service contracts favors the intentions of the Executive. It is also necessary to clarify which agreement – and therefore what working conditions – is the reference agreement for subcontractors if that of the sector or that of the main company.

Labor regulation of digital platforms. This change is the one that can be resolved the soonest, since the Ministry of Labor and social agents have been negotiating it for months. In the last offer from the department headed by Yolanda Díaz, it was proposed to strengthen the elements that dictate that groups such as riders They are salaried workers and the possibility that the workers’ representatives have the right to consult the labor aspects of the algorithms used by the companies (hours, qualifications …).

Active policies and training. The files sent to Brussels raise the issue separately. The first is one on which Brussels repeatedly calls for changes. The Executive’s proposal is to design “individualized orientation trajectories, the promotion of digital training and new employment niches related to the green transition.” It also raises the modernization of public employment services “through digitization, profiling the unemployed and analyzing vacancies.” Another line is the review of bonuses for hiring, of which the recent examination by the Tax Authority has highlighted their ineffectiveness, despite being the main item of expenditure on employment policies.

Tax financing of improper Social Security expenses. The Executive figures in 20,000 million the cost that the foresight institute assumes and that it should not assume, because, the Government and the Toledo Pact understand, they are non-contributory expenses. That money will be paid with taxes and not with contributions, and the deadline to do so is set in 2023.

Maintain the purchasing power of pensions. The intention of the Executive is to negotiate with the social agents a mechanism that ties the evolution of pensions to the progress of the IPC. In addition, Social Security suggests that, without nominally reducing benefits, the years in which pensions rise more than prices should be taken into account to avoid gains in purchasing power, as has happened this year.

Bring the real retirement age closer to the legal age. One of the main cost containment mechanisms is to delay the actual retirement age. Now the legal age is 66 years, for those who have contributed 37.5 years (it will reach 67 in 2027). While the real one is around 64 years old. Raising the latter is one of the objectives of the department headed by José Luis Escrivá through incentives for voluntary delayed retirement and with restrictions on early retirement.

Increase the computation period. Taking more years to calculate the pension is another of the elements put on the table. Finally, it has not been specified how long, despite the fact that 35 years have been mentioned. This means, on average, a lower initial pension for new retirees. To compensate for this, the worst years would also be allowed to be ruled out in the listing.

A new factor of sustainability. The 2013 pension reform designed a sustainability factor that linked the initial pension to the evolution of life expectancy, lowering it if you lived longer. Now, Social Security proposes a return to what was proposed in the 2011 reform, which spoke of a mechanism that, based on the variation in life expectancy, affects other parameters of the pension. Although it is not specified, then it was talking about the initial pension, the number of years of contributions or the retirement age. The aim is “to free the younger generations from an adjustment caused by the reaching of retirement age of more populated cohorts of workers.”

Zhirinovsky predicted the next president of Russia in one word