These are the most important decisions of the G7 summit 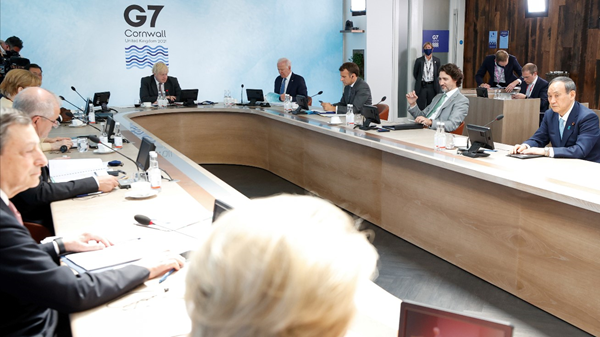 The leaders of the Group of Seven nations showed a great deal of consensus following their three-day summit in Cornwall, southwest England.
The summit is the first in nearly two years, and witnessed a return to live attendance, after video conferences were adopted for many months due to the emerging Corona virus pandemic.
Under the leadership of Washington, the leaders of the countries of the group sought to show unity on the major issues facing the world, starting with climate change, passing through the pandemic, and ending with reviving the global economy.
In the face of the increasing calls in recent months for solidarity, the countries of the group reached a pledge to distribute more than one billion doses of vaccines against Covid-19 by the end of 2022 in the hope of eradicating the pandemic, according to what British Prime Minister Boris Johnson announced at the conclusion of the summit.
The leaders of the Group of Seven countries prepared a plan aimed at preparing the world to enable it to respond to a new pandemic within less than a hundred days, and also called on the World Health Organization to conduct a more in-depth investigation into the origin of the Corona virus.
Today, Sunday, the US President stressed that his country is back in international diplomacy through the G7 summit, which reflected “exceptional cooperation and productivity.”
German Chancellor Angela Merkel considered that the arrival of Joe Biden to the White House gave “new impetus” to the work of the group.
The Group of Seven also touched on the environmental aspect of a large-scale global infrastructure plan presented Saturday for poor countries in Africa, Asia and Latin America, to encourage green growth by stimulating investments in renewable energy resources and clean technology.
The leaders also reiterated their commitment to halve greenhouse gas emissions by 2030 and to halt government subsidies to coal-fired power plants from this year.
The goal is to limit global warming to less than 1.5 degrees Celsius compared to the pre-industrial level, a threshold that scientists believe would leave climate change out of control.
In this context, state leaders plan to provide $2 billion to support the transition process towards green energy in the poorest countries.
The contributions of the Group of Seven will increase in order to find financing of up to $100 billion annually until 2025 for the environmental policies of poor countries.