These are the keys to reestablishing Colombia-Venezuela relations 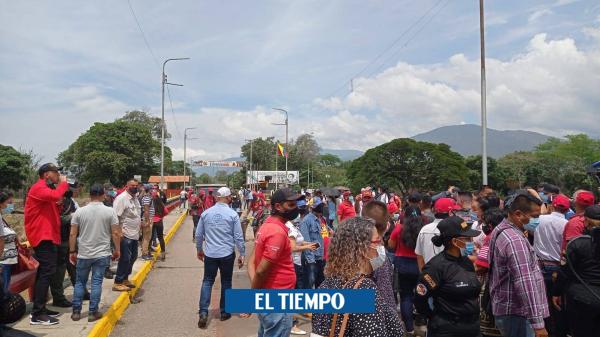 After August 7, relations between Colombia and Venezuela They will enter a new dynamic. The reestablishment of ties is imminent after years of tensions, accusations and diplomatic rupture marked by Bogotá’s disregard of Nicolás Maduro as president, the recognition of Juan Guaidó as interim president and the international strategy led, among others, by President Iván Duque, to diplomatically isolate the Chavista regime.

It might interest you: (High expectations for the reopening of the border between Colombia and Venezuela)

But times have changed: the war in Ukrainewhich unleashed an energy crisis and once again put the focus of the United States on the strategic importance of Venezuelan oil resources, and the forthcoming arrival at the Casa de Nariño of Gustavo Petro they tip the balance towards a review of relations with Miraflores, despite all the obstacles and slopes that must be overcome for normalization.

This week’s meeting in the border state of Táchira between Maduro’s foreign minister, Carlos Faría, and Petro’s appointee, Álvaro Leyvasets the tone for a new stage of dialogue with the sending of ambassadors included, which, however, is still controversial due to the strong opposition of the outgoing government of Iván Duque to not giving recognition to what is considered a “dictatorship” and the multiple disagreements over the years, which include the contemplative and acquiescent attitude of Caracas in the face of the criminal presence of Colombian irregulars in the border area (they are in 21 of 23 states), the mistreatment of Colombian companies and the non-payment of the debts contracted after the expropriations and questionable economic decisions.

To which is added the indifference of the chavismo towards the enormous problem of immigration.

It will be quite a dilemma and somewhat complex to explain for the Petro government, because, in addition, ties with a regime that is known to violate human rights and freedom of the press would be reestablished; who came to power through condemned practices of persecution and elimination of the rules of democracy and the opposition; that has allowed its territory to become the strategic rearguard of Colombian guerrillas and criminal gangs dedicated to drug trafficking, human trafficking and illegal mining, and that in addition to that clandestinely protects the former leader of the FARC in a Caracas hospital, aka Ivan Marquezwho betrayed the peace process and committed crimes across the border, according to fresh intelligence reports.

We suggest you read: (What is known about the health of Iván Márquez after the attack)

But, for the analysts consulted, a forced pragmatism will tend to prevail in order to address situations that are getting out of control, particularly in the area of ​​border security.

But how far can Petro keep his balance in the face of such an atypical relationship with his neighbor, or look the other way?

The cost of pragmatism

“The relationship is so great that what was rare, atypical, strange was that Colombia and Venezuela tried to maintain a dynamic of non-recognition of each other and of constant confrontation between the heads of state (…). The natural thing is to talk, not what we were in, which was total ignorance and the rupture of any communication channel,” Ronal Rodríguez, researcher and spokesperson for the Venezuelan Observatory of the Universidad del Rosario, told EL TIEMPO.

For his part, the Venezuelan political scientist Rommer Ytriago believes that the benefits of reestablishing relations are more for Venezuela than for Colombia. The analyst believes that Maduro needs to fully reinsert himself into the international community, but he also needs economic agreements.

“You are not looking for a security and defense issue, but rather an economy, expansion of the left,” estimates Ytriago, considering that issues concerning irregular groups may not be a priority.

The Guaidó theme, another hot potato

The relationship is so great that what was rare, atypical, strange was that Colombia and Venezuela tried to maintain a dynamic of non-recognition of each other and of constant confrontation

In that sense, resuming trade and relations has its costs, or at least he thinks so. Delsa Solorzanodeputy close to Guaidó: “When doing business with a dictator, that money is stained with blood.”

Another of the big questions that Petro and Leyva will have to resolve is what their position will be from now on against Guaidó, another hot potato, since the reestablishment of relations would imply an implicit recognition of Maduro.

Guaidó has the recognition of more than 50 countries (including Colombia), and in fact he has just scored a diplomatic triumph with the British justice regarding the gold of the Venezuelan reserve deposited there.

“Whether we like it or not, Maduro is the one who holds the real power in Venezuela. Guaidó’s bet was that, a bet, a strategy that failed and that as a strategy must be changed. We have to go to the next strategy and that implies a rapprochement with Venezuela, a recovery of border relations, consular relations and diplomatic relations, which is much more diverse than with other countries,” Rodríguez notes.

Along the same line is the Former Colombian Foreign Minister Julio Londoño Paredeswho told EL TIEMPO that the very figure of Guaidó has been weakening in the international arena.

“There are many Venezuelans from the opposition who consider that steps must be taken to arrange an action with the government, because everything indicates that Mr. Maduro will be at least until 2024.”

This, while the US tries to unblock the dialogues of the regime with the opposition in Mexico, which in itself poses a shift, although it continues to consider Guaidó the interim president.

When doing business with a dictator, that money comes stained with blood

For her part, Solórzano, who is also a lawyer and human rights defender, and one of the promoters of the investigation against Maduro before the International Criminal Court (ICC), recalled that Duque was a key piece in advancing before The Hague: “I ask him to the new Petro government: are you going to be silent in the face of that? Are you going to ignore the investigations against Maduro? I would like to know if the foreign minister (d) asked Maduro’s representatives when they are going to release the political prisoners.”

On another front, for the opposition Williams Davila, deputy of the Assembly headed by Guaidó, a “call” to the president-elect is necessary, not only to recognize “the importance” of the more than two million Venezuelans on Colombian soil, but to “bear in mind that the reality of Venezuela It is a product of the emergency caused by the dictatorship.” And he urges that Colombia can contribute to a “democratic solution”, because “that is the most important cooperation”.

The Eln and the criminal gangs on the border

Right now, the border is closed to vehicles, and people can cross with some restrictions. That’s why consular services are key.

“At this time there is no consulate of Venezuela in Colombia, nor of Colombia in Venezuela. All of that was broken. Not only during the current administration, but during the government of Juan Manuel Santos. Everything is cracked,” Londoño added.

In this complex scenario a new element appears and it is Petro’s intention to re-establish talks with the ELN guerrillas and bring the criminal gangs to justice within his announced ‘total peace’, just when there is a strategy of these of ‘pistol plan’ and regional ‘armed strike’.

There are many Venezuelans in the opposition who believe that steps must be taken to arrange an action with the government, because everything indicates that Mr. Maduro will be here at least until 2024.

“The negotiation with the ELN is going to be very complex. The Eln is a paramilitary group in Venezuelan territory. It is known that there are FF actors. MM. Venezuelan women who have articulated at times with the ELN, for example, with the ‘Second Marquetalia’, to confront the ‘Gentil Duarte’ dissidence. That is a very sensitive issue in the negotiation because we must remember that Venezuela systematically denies the presence of the ELN and the articulation of these groups with state actors,” adds Rodríguez.

This, plus the issue of the Monómeros firm, currently under the control of the Guaidó sector, but with serious allegations of corruption, and many others that the two governments will have to work on on their way to normalizing very difficult and stormy relations. but also absolutely necessary.