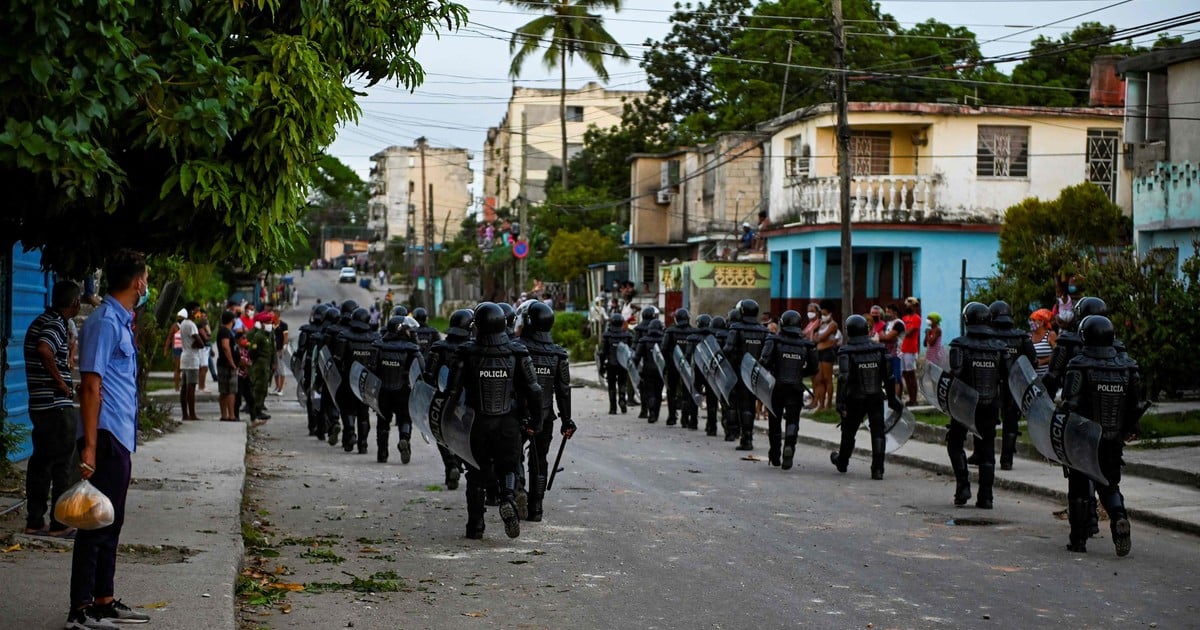 The government of Cuba confirmed this Tuesday that the opposition protests that spread this weekend in several cities have already left one dead.

According to a statement released by the Cuban News Agency, Diubis Laurencio Tejeda, 36, died on Monday afternoon when “organized groups of antisocial and criminal elements (…) disturbed the order” and tried to go to a police station in Police “with the aim of attacking their troops and damaging the facilities”, in the municipality of Arroyo Naranjo.

The demonstrators were intercepted by the security forces, reported the Cuban Interior Ministry, and in an attempt to evade the action “they set fire to containers.” In addition, the official statement added, “they attacked the agents and civilians at the scene with white weapons, stones and blunt objects.”

In the framework of the clashes between the security forces and the protesters, dozens of people were arrested. Although the government of Miguel Díaz-Canel did not give figures, other sources spoke this Tuesday of between 130 and 140 arrested.

An image of the protest in Havana, this Sunday. Photo: REUTERS

The Interior Ministry lamented the death of the protester “in the middle of a complex scenario in which citizen tranquility and internal order are preserved.” But he said nothing about the detainees, as many families search for people allegedly arrested.

“They took my daughter on Monday and I don’t know anything about her, but I won’t say more, nor do I want to be filmed,” says a woman in front of a police center in a neighborhood near Havana.

No news from those arrested

His anguish is that of many relatives of the more than a hundred detainees in Cuba during two days of demonstrations against the government.

According to a list published on Twitter by the opposition Movement San Isidro, until this Tuesday 130 people remained arrested or missing, including independent journalists and opposition activists, including José Daniel Ferrer, Manuel Cuesta Morua and Luis Manuel Otero Alcántara, the country’s main dissidents.

The playwright Yunior García, one of the initiators of the 27N movement that brings together artists and intellectuals who demands greater freedom of expression, also denounced his arrest.

García said that he went on Sunday with other colleagues to the Cuban Institute of Radio and Television (ICRT) to ask for 15 minutes before the cameras.

Relatives of detainees gather near a police station in Havana to request information. Photo: EFE

But “we were beaten, dragged by force and thrown on a cargo truck, like bags of rubble,” he denounced, noting that on Monday they were released “under a precautionary measure.”

Between Monday and Tuesday, a lieutenant received relatives at the police station who were asking about those arrested.

“All the detainees were transferred to the Vivac (detention center), to 100 and Aldabó (headquarters of the Technical Directorate of the National Police) and to 10 de Octubre (another station),” he tells them dryly, without giving further details. .

Another 50-year-old mother was also investigating the whereabouts of her 21-year-old son. “They took him from the house handcuffed and beaten, without a shirt, without a mask,” and also “they took many from the neighborhood, young and old,” says the woman, who prefers not to reveal her identity.

Also under anonymity, a 24-year-old girl comments that her 25-year-old brother “was taken out of the neighbor’s house.” “They gave him a tremendous hand of blows, unjustly, and took him away,” he says, without knowing where he is. “My mother almost had a heart attack,” he says.

Pro-government protesters clashed in Havana with groups protesting against the island’s Executive, this Monday. Photo: REUTERS

The opposition organization Ladies in White, for its part, denounced the arrest of its leader Berta Soler and her husband, the politician Angel Moya, “Upon leaving the National Headquarters” of the organization, in Havana.

The detainees also include Camila Acosta, a 28-year-old Cuban journalist from the Madrid daily ABC. The Spanish Foreign Minister on Tuesday asked the Cuban authorities to respect the right to demonstrate and demanded the “immediate” release of Acosta.

Among the most outstanding cases is the young youtuber Dina Stars, who was arrested at her home by the Cuban police when she was speaking live with a Spanish television program.

An apparent calm reigned in the capital on Tuesday, although with a large military presence and plainclothes agents touring the neighborhoods.

But Mobile internet, the driving force behind the demonstrations, was still suspended on the island. The Internet monitoring group Netblocks reported interruptions in Cuba on the main social networks and communication platforms, such as WhatsApp and Facebook.

That is why the United States formally urged the Cuban government to end the restrictions and renewed the request for the release of the detained protesters.

“We call on the leaders of Cuba to show restraint and respect for the voice of the people by opening up all means of communication, both digital and non-digital,” State Department spokesman Ned Price said at a press conference.

“Closing access to technology, closing information channels, that does nothing to respond to the needs and legitimate aspirations of the Cuban people,” he said.

Washington emphasized the sense of popular rebellion that the demonstrations had.

“We congratulate the people of Cuba for showing great courage,” despite the government’s attempt to “silence their voices,” Price said.

And he added: “We call for calm and condemn all violence against those who protest peacefully. And we also call on the Cuban government to release any detainee for peacefully protesting ”.

These unpublished demonstrations, generated by the economic crisis that is shaking the country and which degenerated into confrontations with the security forces, irritated the communist government that accused the United States of being behind them.

About fifty organizations, including Amnesty International and the Latin American Youth Network for Democracy, on Tuesday condemned the Cuban government’s “repression” against the citizen protests registered in Cuba and urged that the violence against protesters and detainees released.