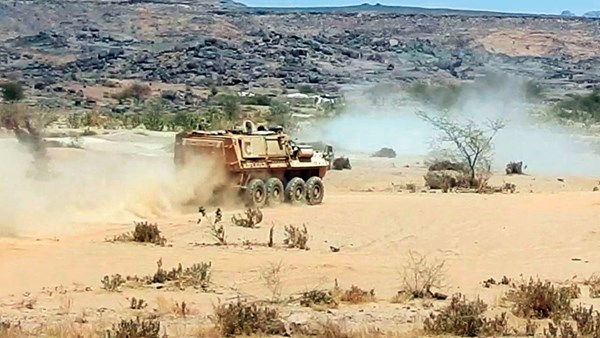 The Yemeni army, backed by tribal fighters, carried out a tight ambush targeting groups of the Iranian-backed terrorist Houthi militia on the “Khanjar” front, north of the city of “Al-Hazm” in Al-Jawf Governorate.
A military source said that groups of the Houthi militia tried to infiltrate one of the military sites west of the “Al-Khanjar” camp, but the army forces were monitoring its movements from the beginning and caught it in an ambush, stressing that the ambush resulted in the death and wounding of most of those elements, while the rest of them took refuge. They fled, leaving behind their equipment and the bodies of their dead.
Since the beginning of this week, the Yemeni army and tribal fighters have been engaged in continuous battles throughout the theater of operations on the Khanjar front, during which the Houthi militias have incurred countless losses in equipment and lives.
In addition, the fighters of the Coalition to Support Legitimacy are continuing their air raids on the militia’s concentration sites on the outskirts of Ma’rib Governorate.
During the past hours, air raids targeted gatherings and reinforcements of the Houthi militia on the “Al-Kasara” front, killing and wounding a number of militia members. The raids also led to the destruction of vehicles and combat mechanisms belonging to the Houthi militia.
In another context, Yemeni media have documented the killing of at least 458 field commanders of the Houthi militia on several fronts since the beginning of this year until late May.
The media monitored the killing of 351, whom the militias affiliated with Iran had granted military ranks in violation of military laws. The dead field commanders were distributed according to the impersonated rank to 3 with the rank of major general, 15 brigadier generals, 40 colonels, 49 lieutenants, 46 majors, 62 captains, 73 first lieutenants, 11 second lieutenants, And 52 at the rank of assistant, while the rest were deceived by civilians and tribesmen who were not included by the militias for their military wing.