The worst of the pandemic in Brazil: “All our ICU beds are occupied” 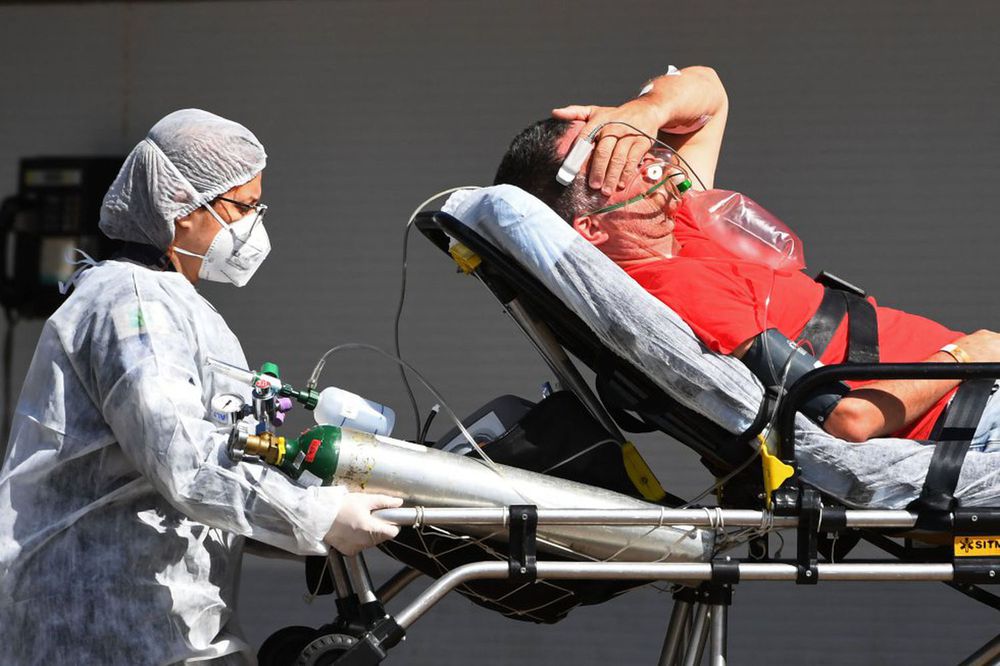 The Iguazu Falls attracted thousands of tourists until the plague changed everything. Now the ICUs in the nearest Brazilian city are so crowded that last weekend the mayor tried to empty the streets to stop the infections. He decreed two days of general confinement, one of the most drastic measures adopted in Brazil to relieve hospitals at the worst moment of the pandemic. Intensive care nurse Cristina Morceli, 36, was able to leave because she was on duty at the Foz de Iguaçu public referral hospital for covid. “All of our 70 ICU beds are occupied. When someone dies or is discharged, the next one immediately comes in, ”explains this professional who has been on the front lines of the war against the coronavirus for the last year by phone.

“Those who are in the queue of a place in the ICU wait in the ambulatory emergencies, some even have to intubate there.” Try to keep them alive while they queue. In the state of São Paulo alone, at least 60 patients have died while waiting.

Twelve months after the first cases, Brazil is going in the opposite direction to the rest of the world. Here the pandemic is rampant. This Tuesday, the fourth Minister of Health took office since the start of the pandemic. It was received by the nth record, more than 2,800 deaths and 84,000 infections in 24 hours. Dizzying increase while the curve falls sharply in the rest of the countries with the most deaths per million inhabitants: the United States, Mexico, the United Kingdom and India. Last week 12,000 Brazilians died. It is undoubtedly the worst moment of the pandemic. Brazil, which started with the advantage of seeing the mistakes and successes of China and Europe, did not know how to take advantage of that experience. He underestimated the threat and now has nearly 280,000 deaths and 11.5 million cases.

In the ICU where Morceli works, they have had three patients in cardiac arrest at the same time. “I take care of eight patients, I run all day from one place to another,” says this woman whose unit was converted overnight into an ICU to attend to the avalanche of coronavirus patients. Different people from the first wave. “This month the income has increased a lot. They arrive very serious. But they are also young people, 30, 40, 50 years old. I think they are the ones who have had to go out to work to survive, “he says. Professionals have much more difficulty keeping them stable than patients who are ill in the first months.

Brazil is twice as large as the European Union. The situation is critical because in the first wave the outbreaks were by region, but now the increase in infections is repeated in 24 of the 25 states.

Another Brazilian advantage was the pedigree. It knew how to contain AIDS at the end of the century, it has a robust public health system and a vaccination program that reaches every corner, when there are doses. As now they must be imported, only 6% of the 2010 million Brazilians have received the first dose. That is one of the factors of the lethal cocktail. The highly contagious Brazilian variant has joined the policy of sabotage against the health measures of President Jair Bolsonaro, the failure to purchase vaccines, the millions who need to go out to earn a living, governors and mayors fearful of the high price policy to adopt measures that epidemiologists call for but are unpopular, such as confinement. On Monday, Bolsonaro appointed his fourth Minister of Health since the start of the pandemic. Cardiologist Marcelo Queiroga replaces General Eduardo Pazuello, who never upset the president.

Disdain for the most basic measures is widespread even in the deadliest week of the pandemic. On Saturday, a 54-year-old Bolsonarist deputy who proposed a law against mandatory vaccination (it is not) died of covid-19. Gabigol, a star of the Brazilian soccer league, was hunted at a clandestine party with 300 people in the early hours of Sunday. Hours later, thousands of Bolsonarians demonstrated in various cities against the confinement. Many without masks and shouting slogans. The pressure from workers and employers is enormous. The mayor of Rio relaxed a few days ago the restrictions for street vendors to return to the beaches and restaurants to open until nine at night. Sao Paulo has closed restaurants, schools and churches for two weeks as of Monday, but the stations are still crowded. Like the city’s ICUs, even those in private hospitals that serve the super-rich and powerful across the country.

Authorities scramble to open new ICU beds as hospitals scramble to recruit health workers. The places are even advertised on social networks. But it is not enough to hire them, you have to train them. And it is done on the run. After a year of pandemic, nurses, doctors, health workers in general are exhausted. “Physically and emotionally exhausted,” says Sandra Valesca Fava, 50, an intensivist nurse in a neonatal unit in Fortaleza (Ceará). With 12 babies sick with covid, it is at 100% occupancy. “As the new strain affects younger people, women of childbearing age and pregnant women are catching it.” And with them, their babies. But when a place is free, they can no longer attend to a premature or newborn with heart problems, who were always the majority among their patients, because they would run the risk of contagion. They must be referred to the ICU of other centers. “The system has not yet collapsed because we can still find a place in another ICU, but we see that it could happen despite all our efforts to avoid it.”

One of the few consolations of these two nurses is that they are immunized. Although health personnel have taken priority, their deaths continue to increase in Brazil. Among the eleven million cases, 50,000 were nursing professionals (85%, women), according to Cofen, the Federal Council that groups them. There are also 662 among the 270,000 people who have lost their lives.

The overload is such that many health workers are asking to retire or leave. And with fewer professionals, the staff have to lengthen the hours and do all kinds of juggling such as training inexperienced colleagues while treating extremely serious patients.

Ukraine boasted of a missile capable of making Russia “freak out”