The worst face of inequality in the fight against the coronavirus: a scarce good called oxygen 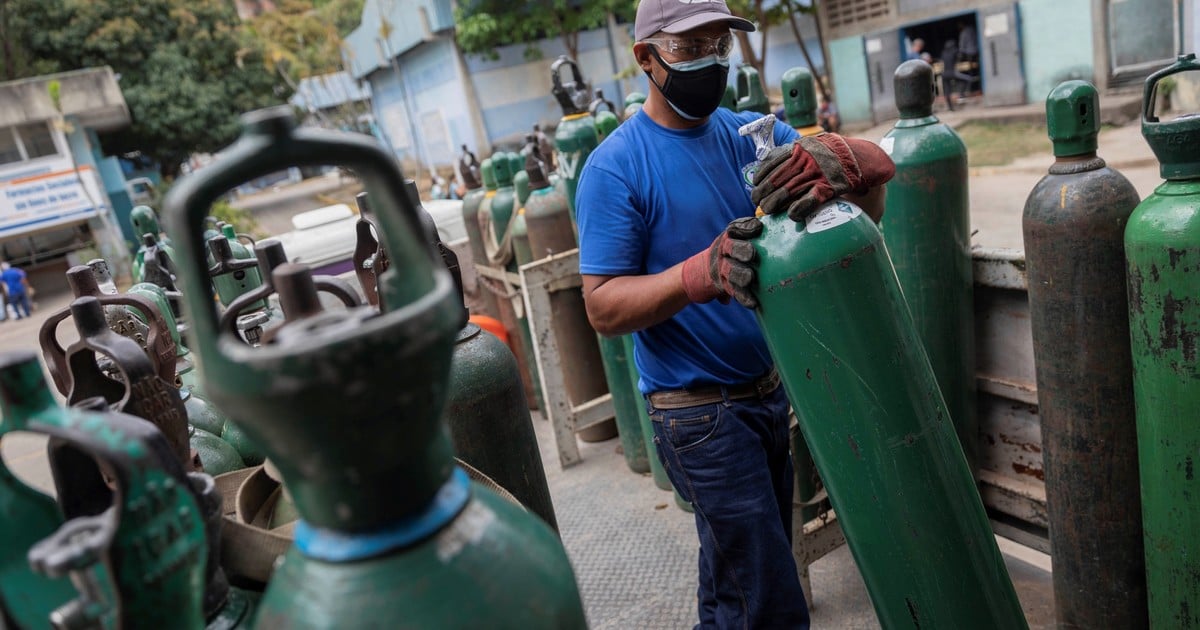 “It was all in oxygen”says Ana Lucía Farro, a 28-year-old Peruvian marketing analyst. Family savings, the money her parents had set aside to buy her a flat, volatilized. Literally.

In dozens of oxygen cylinders that, day by day, this middle-class Peruvian family bought at exorbitant prices on the streets of Lima to save Uncle Jorge’s life.

The pandemic has lit a ruthless black market for oxygen given the scarcity of a resource that makes the difference between life and death for covid patients. Prices have multiplied by ten in India, which today suffers the worst oxygen emergency in the world, although Brazil, Mexico, Peru, Colombia, Albania or Malawi have also experienced the same.

When 51-year-old Uncle Jorge fell ill in mid-February, Peru no longer had enough oxygen to meet demand. They decided not to admit him, convinced that at home, under the care of Ana Lucía’s mother, a nurse, he had more possibilities.

Oxygen jugs in a hospital in India. AFP photo

First they bought a concentrator, a device that filters and extracts oxygen from the air, for 12,500 soles (2,700 euros), five times its prepandemic price, in a country where the average salary is 1,500 soles. But the machine only works for moderate cases and they soon had to go to the cylinder. It was a nightmare for two weeks.

To wake up every day with the anguish of being able to get more oxygen before the one you got yesterday runs out. To recharge a 10 cubic meter cylinder, they paid 1,900 soles (420 euros), almost 12 times more than the usual 160. “It could last a day or just a half, if it got really bad,” says Ana Lucía.

It demanded to have the whole family tracking the internet, making endless queues in front of plants where suddenly the supply runs out and they send you home, calling phones that always communicate. Dodging scammers. They learned to be wary of miracle offers: once, they found a bottle at an unbeatable price and paid a reservation; When they arrived at the place of collection, no sign. “You feel desperate, especially because you could have been queuing at a plant, but suddenly you find that you will not have oxygen for that night.”

The savings were polished, they calculate that 50,000 soles (11,000 euros), but they saved the uncle. Many families in Peru cannot say the same.

Oxygen has been revealed in the pandemic as the bloodiest face of health inequality. Its scarcity is costing thousands of lives every day in poor and not-so-poor countries, in a more direct way than the lack of vaccines, which have attracted much more attention from the international community.

A patient treated with oxygen in India. AFP photo

“Oxygen has not been prioritized, neither from governments nor from multilateral institutions. I hope that what happened in India opens your eyes. Vaccines are the end point to control this pandemic, but it will take time. Meanwhile, oxygen and corticosteroids is all we have “, warns Robert Matiru, director of programs at Unitaid, an agency of the World Health Organization (WHO). They estimate that today 1.1 million people in low- and middle-income countries need 28.1 million cubic meters of O2 per day, triple the number three months ago.

Lack of medical oxygen is not new –claims 120,000 deaths of children a year, estimates the NGO PATH– but the pandemic has exacerbated it. According to the WHO, one in five covid patients will need oxygen. Also, much more than usual. If a flu patient is worth a flow of 15 liters per minute, they need 70, explains Dr. Marisa Gaspar, from the Spanish Society of Hospital Pharmacy.

A country like India had before the pandemic a demand of about 700 tons of O2 per day, amount that rose to 2,800 in the first wave. Now, with a wild regrowth due to the appearance of new variants, it needs more than 5,000 daily.

In Spain, the pandemic has increased demand by more than 50% per year and there have been monthly tips of 200%, says Gaspar.

The explosion was abrupt, it occurred in a few days in March 2020, says Félix Ruiz de la Prada, from the Association of Manufacturers of Industrial and Medicinal Gases. “Hospitals weren’t prepared, they needed many more intakes and many more pipes to have greater capacity, more tanks, and so on. That is why at the beginning the supply had to be made basically in the bottle ”, he recalls.

Ruiz de la Prada claims that if Spain never suffered shortages it was thanks to the rapid reaction of manufacturing companies that, “by corporate decision”, transformed their plants and gave priority to medicinal gases to the detriment of industrial ones, although he admits that in confinement industrial demand was low. “We were producing 24 hours a day, seven days a week, day and night, it was an epic production. There were calls at two in the morning from people crying that they needed oxygen, but we got there. We knew that behind that demand there were human lives ”.

Faced with the emergency, the Medicines Agency temporarily allowed the use of industrial bottles. And the health system got down to work: larger tanks have been installed in hospitals, more fixed intakes and 70,000 flow meters (the regulator in the wall socket) in healthcare centers and residences.

“All of this has allowed us to face the following waves in much more favorable conditions,” says Gaspar. Now we are prepared for all kinds of demand and we have even been able to face such complicated contingencies as the storm Filomena in the middle of the third wave, which blocked factories, roads and access to hospitals ”.

Medical oxygen is produced in three ways. In the first world, most come from cryogenic plants, where it is obtained in liquid form. Its main use is industrial, while the medical, which requires more purity, only represents 5-10% of world production. It can be transported in cylinders or in bulk by truck to hospitals which, in more developed countries, usually have large tanks where oxygen is stored and converted to gas, and then supplied by pipeline directly to beds.

It is the most efficient technology but it requires expensive infrastructure. If there are thousands of cryogenic plants in Europe or the US, in Africa there are about 40 or 50, estimates PATH’s Evan Spark-DePass, who has been denouncing unequal access to oxygen for years.

There are also PSA (Pressure Reversal Adsorption) plants, which produce high purity oxygen and are built in a few months. They are the ones that Peru or India are now trying to erect in a hurry. Finally, concentrators: they have the advantage that they are small and only need electricity, but the oxygen is of less purity and its flow rate is low.

“The infrastructure has been decisive to be able or not to face the increase in demand. It is very different if your hospitals have tanks or operate with cylinders, but the number of factories in the territory and their geographical distribution is also key. Malawi has none and relies on oxygen trucked in from South Africa, “says Spark-DePass.

The case of India is different from that of other countries that have few means at their disposal to cope with an exponential increase in oxygen demand, laments Robert Matiru, director of programs at Unitaid, who sees a “failure of planning and epidemiological surveillance”.

In September, India passed the first wave with no shortage. The authorities were confident and relaxed the restrictions, a decision that, combined with the appearance of two variants, has been catastrophic. The second wave is being much worse: there are four times more cases daily than in the September peak.

Still, Matiru is convinced that, with planning, the most deprived hospitals could have been prepared. “India has experts in biomedical engineering, considerable industrial oxygen production that it can turn into healthcare and financing.” There are 500 oxygen plants, the majority in the east of the country, with the industry. Sending oxygen north and west, in trucks that only travel during the day and at reduced speed, is complex logistics, especially when it is against the clock.

The Government is importing oxygen, has banned its use for non-medical purposes and it is sending tanks by train and plane to the worst affected areas.

Matiru warns that it will not be easy to control the situation: “We still have hard days and weeks ahead.”

“It is not that there are a million options available in the short term. Oxygen has a complex supply chain. There are not only difficulties in production, but also in transport, storage and even administration ”, he adds.

All of these elements determine the final price, the manufacturers argue. But a small bottle It was sold in February for $ 800 in Mexico, when the cost of its content is about 10. The money that is paid in the streets of Delhi, Mexico City or Manaus rotates in another orbit. The one of despair. Matiru points to corruption and is convinced that “there are leaks from government plants and from the industrial sector itself.”

The shortage will not be resolved until the bull is caught by the horns, Matiru argues. A six-horned bull, the multinationals that dominate the global liquid oxygen market: Linde (UK), Air Liquide (France), Air Products (USA), Messer (Germany), SOL (Italy) and TNSC ( Japan). “You could call it almost an oligopoly. The lack of competition means that prices are highly variable and not sufficiently transparent. There are no incentives to produce medical gas because they earn much more with the industrial and the premiums that are charged by the doctor are completely unjustified “, denounces the head of Unitaid.

But his agency will not get these multinationals to agree to sit down to renegotiate contracts and lower prices without political backing, he admits: “We need pressure. The governments where these companies are based have a role to play ”. The French Government, remember, did not hesitate to intervene to negotiate with Air Liquide when it needed thousands of ventilators. The French multinational is the only one that has contacted Unitaid to offer oxygen at cost in needy countries. Are you looking to expand your market? “Maybe yes, but it is the only proposal we have.”

Pfizer expects to enter more than 21,000 million this year with the covid vaccine

Back to the golden age? Ubisoft plans sequel to the best Assassin’s Creed of all | EarthGamer