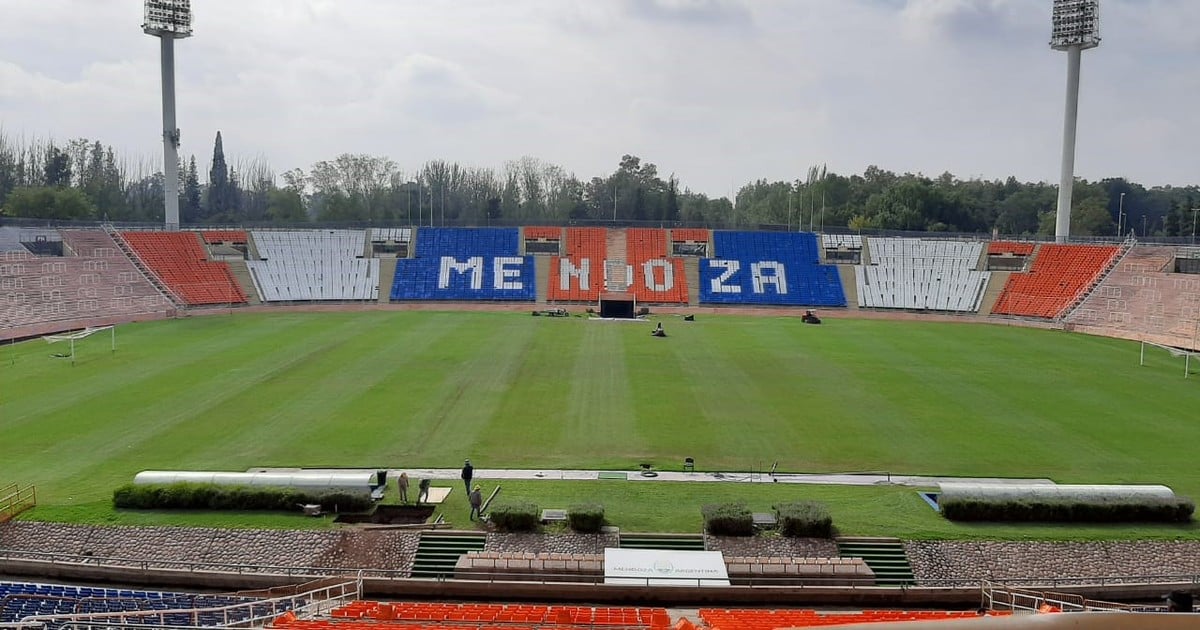 Godoy Cruz Antonio Tomba says goodbye to the Malvinas Argentinas World Cup stadium in the match against River Plate, this Saturday at 9:00 p.m. The General San Martin Park playing field, where the Mendoza team has played home for the last 15 years, is in full refurbishment work to be one of the venues for the Copa América 2021.

“We had not contemplated the game with River, but the field is ready to play,” he assured Clarion, the agronomist Manuel Horno, technical manager of the playing field. This Friday at noon, the leader of the Professional League, Sebastián Ferchero, toured the field to verify that the work that was done last Tuesday did not affect the quality of the field.

A little less than three months before the Copa América, organized by Argentina and Colombia, the Subsecretariat of Sports of Mendoza began trenching the playing field for the installation of the new sprinkler irrigation pipes. “We have only intervened on the north side of the field, because the rains did not allow us to continue with the sprinkler irrigation works on the south side,” explained the person in charge of the playing field.

The sprinklers will be distributed to cover the entire surface of the court, the perimeter and the area of ​​the substitute benches. On Tuesday, the grass was removed with a machine, the pipes were installed and the same day, it was covered again. During the rest of the week, the roller has been rolled so that the grass is in playing condition.

“This game was not going to be played but at the request of Godoy Cruz, it was enabled,” said engineer Hornos. He explained that it was planned to continue on Wednesday, when they planned to ditch the southern part of the field, but as it rained all day, the work was halted.

This Friday, the field maintenance staff cut the grass and rolled several times to mark the cross stripes. About the visual aspect that the court will have, Hornos said: “The scars of the grass champas removed and replaced to install the irrigation will be noticed, but I estimate it will not affect the quality of the game.”

The long-awaited return to the neighborhood for Godoy Cruz

The novelty – much awaited by the fans of the wine club – is the return to the neighborhood, with the development of the Feliciano Gambarte stadium, home of the Godoy Cruz club.

Tomba’s last match at his stadium was on June 18, 2005, in a draw against Tiro Federal de Rosario. This week, the managers decided to initiate the necessary arrangements to fulfill the commitments against Arsenal (11/4), Central Córdoba (25/4) and Banfield (9/5).

Mendoza. The Sports Directorate of the Cuyo province began with the tasks to fine-tune its province stadium. The Godoy club prepares the return to Feliciano Gambarte, the headquarters of the Primera team’s neighborhood.

In the year of the centenary of the wine club and the next elections of its board of directors, there are many speculations that arise about the possibility that the Primera team will return to its stadium.

In an interview this week with radio La Red, Claudia Correa, the mother of Santiago “el Morro” García, said that the president of Godoy Cruz José Mansur will reopen the field to “Cover up all the garbage he made with his son”. El Morro, the club’s idol, was going through a depression and committed suicide on February 6 when he had been displaced from the team and was in conflict with the leadership.

The Agrupación por el Barrio, which militates the reopening of the Tombino stadium, calculated the investment for the Gambarte to be enabled at 4 million dollars. If you plan to increase the capacity of spectators, improve the lighting and other necessary works, the cost would be 10 million dollars.

For now, the Godoy Cruz leadership seeks to be qualified to fulfill this stage of the tournament. The last word is the AFA: Ferchero, who checked the field of the World Cup stadium, also took advantage of his visit to Mendoza to verify the conditions of Gambarte. Meanwhile, Godoy Cruz fans are excited about the long-awaited return to the neighborhood.

After death threats by Evangelion, its creator thought about committing suicide | EarthGamer

Dead Bernard Madoff, who was sentenced to 150 years in prison for pyramid fraud, died in prison