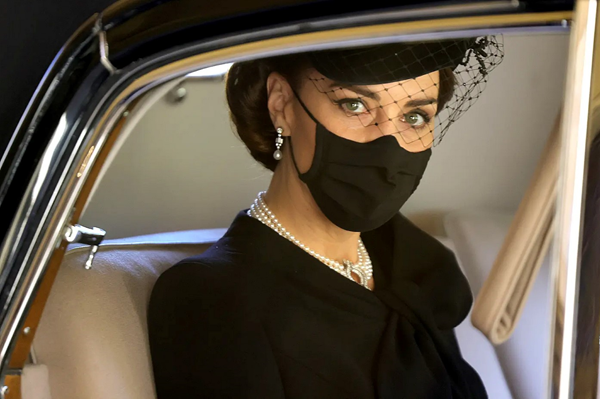 The funeral of Prince Philip, husband of Queen Elizabeth II of Britain, was an occasion for the gathering of 30 people from the family and those close to her only, in light of the delicate health conditions imposed by the spread of the Corona pandemic. The women of the royal family used the language of jewelery to send messages of appreciation to the late prince.

Prince Philip’s funeral took place at St George’s Chapel at Windsor Palace. All the women present wore black, while the men wore the same colored formal suits. Although the focus was not at all on the looks of the audience on this sad occasion, the language of jewelry accompanying the fashion was used to send messages of affection and appreciation to Prince Philip, who passed away at the age of 99.

The most noticeable presence of the Duchess of Cambridge was Kate Middleton on this occasion. She coordinated her black Catherine Walker coat with a four-tiered pearl necklace adorned with a diamond necklace, which she borrowed from Queen Elizabeth’s jewelry collection. The pearls from which this necklace is made was received by the Queen as a gift from the Japanese government, and Elizabeth II wore it on various occasions as well as loaned by her late Princess Diana to wear it in a party during 1982.

Kate Middleton coordinated this necklace with earrings studded with diamonds and pearls that Queen Elizabeth received from the King of Bahrain as a gift for her marriage to Prince Philip in 1947. The late Princess Diana had previously wore these earrings on several occasions as well. Kate completed her look with a black hat and “Stiletto” shoes in the same color, and covered her face with a mask in the same color.

Queen Elizabeth appeared at her husband’s funeral with a black coat and hat, and she complemented her look with a pearl necklace and earrings in addition to a brooch she inherited in 1953 from her grandmother.

Camilla, wife of Heir Apparent Prince Charles, also attended the event. She adorned her black coat with a brooch that reminded her of her position as commander of the Rifle Regiment. This site moved to it after the retirement of Prince Philip, who had been in charge of it for many years.

HS Espoo | Garden furniture appeared next to Länsiväylä on an uninhabited island: “A complete mystery”