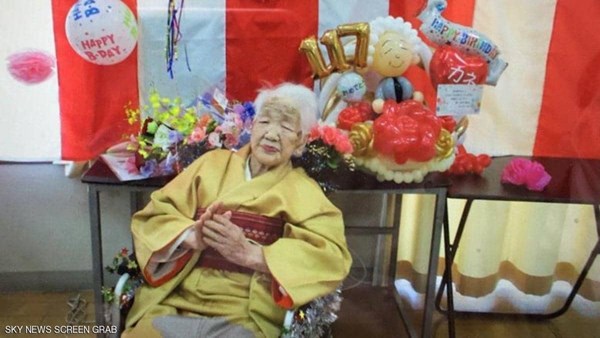 Today, Wednesday, an official at a nursing home where the world’s oldest person resides, a 118-year-old Japanese woman, said that she had decided not to participate in the torch relay for the Tokyo 2020 Olympics due to fears of the pandemic.
The official added that Kani Tanaka, who entered the Guinness Book of World Records, was one of the participants in the torch relay in Fukuoka, southern Japan, which begins on May 11.
“We have received an email from her family saying that she wants to withdraw from the torch relay because she and her family are concerned about the spread of the virus in the nursing home,” said the official from the nursing home.
The Olympic torch relay, which began in March, has suffered setbacks due to the outbreak of the Coronavirus. On Sunday, the Tokyo 2020 Organizing Committee said that six people who helped in the torch relay came as a result of testing positive for Covid-19, bringing the number of cases related to the event to eight.
Some celebrities were due to participate in the torch relay but withdrew for safety reasons in the midst of the pandemic.
Last month, Japan declared a state of emergency linked to Covid-19 in densely populated areas including Tokyo and Osaka, to curb the rise in infections.
The Yomiuri newspaper reported on Wednesday that the government is considering extending these measures.