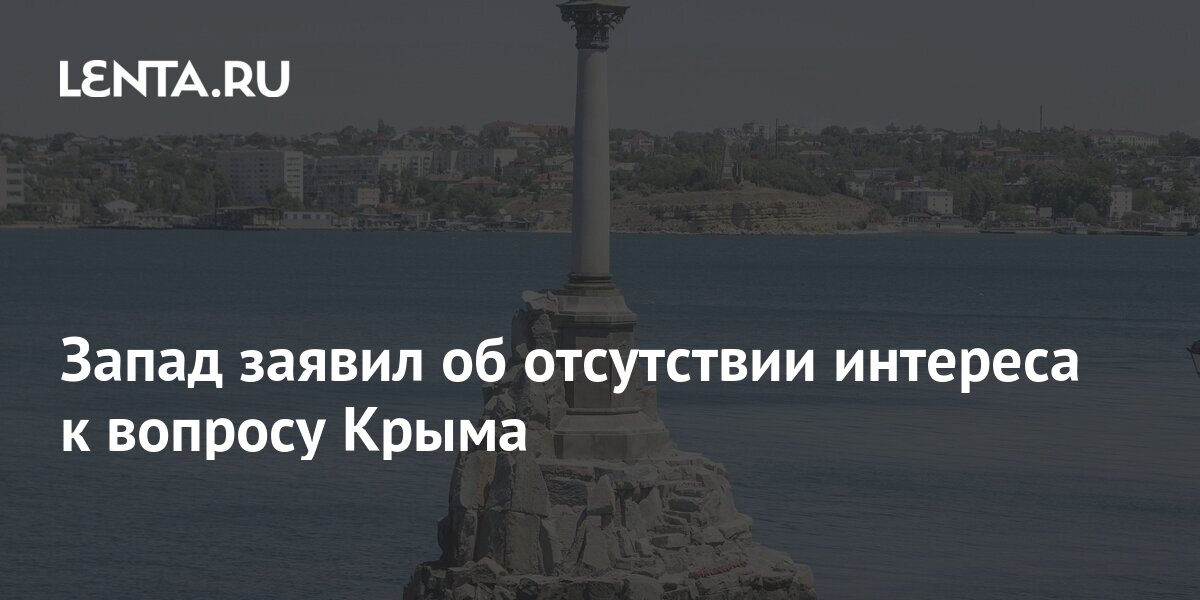 French newspaper journalist Le Figaro Anna Darroman said that the West is not interested in Crimea. She noted that Ukraine is trying in every possible way to remind about its independence and raise the issue of the peninsula, including by gathering the Crimean Platform summit, but the allies do not consider it on the international agenda.

The observer cited as an example the statement of the Ukrainian political scientist Volodymyr Fesenko, who said that the large-scale celebration of the 30th anniversary of Ukraine’s independence is intended to attract attention abroad and within the country, and this year the authorities want to focus specifically on Crimea.

In February, Volodymyr Zelenskyy signed a decree on the “strategy of de-occupation” of the peninsula, the first roadmap, “which defines the main directions of state policy regarding the reintegration and de-occupation of the temporarily occupied Crimea.” However, these documents are unlikely to contribute to the return of the peninsula, especially when the Crimea issue is not a priority for Ukraine’s allies.

Turkey is gently taking over the countries of the former USSR. Why can’t Russia stop her?

Darroman cited as an example the words of Deputy Prime Minister of Ukraine Aleksey Reznikov, who noted that Western attention was focused mainly on the conflict in Donbass, while Crimea disappeared from the international political agenda. The Deputy Prime Minister noted that Ukraine “seemed to have already partially accepted the fact of the seizure of Crimea.”

At the same time, the leaders of the United States and France, Joe Biden and Emmanuel Macron, were not present at the Crimean Platform summit; German Chancellor Angela Merkel also refused to attend the event, despite the fact that it was held the day after her visit to Kiev. The journalist noted that this decision, in the opinion of the Ukrainian authorities, testifies to the duality of Berlin’s position.

On August 22, Merkel and Ukrainian President Volodymyr Zelensky held talks in Kiev, during which they discussed the Nord Stream 2 project, as well as a peaceful settlement of the situation in Donbass. The Ukrainian leader presented the German Chancellor with the Order of Freedom, the highest state award, and thanked Kiev for its strong support in key issues.

Darroman added that Ukrainian society has realized the difficulty of returning Crimea. She cited the example of a recent poll, according to which 61 percent believe that the peninsula should be returned to Ukraine, but 44 percent believe that this is unlikely. The figure has grown by seven percent since 2016.

The Crimean Platform summit was held on 23 August. The participants issued a declaration summarizing the results of the event. “Crimean Platform” condemned the illegal annexation of Crimea, its militarization, “violation of the rights of citizens” in the region and “changes in the demographic structure” of the peninsula as a result of the resettlement of Russian citizens there.

The forum participants announced the possibility of introducing new sanctions against the Russian side, “if it is needed and Russia’s actions will demand it.” Member of the Federation Council for International Affairs Sergei Tsekov, in an interview with Lenta.ru, expressed the opinion that Ukraine can impose any sanctions against Russia, but none of them will have a significant impact on the country’s economy. The senator added that the summit was a pure shame for its organizers, primarily in terms of the level of representation: none of the top officials of the invited states came there.

The ideal team of Day 6 in Liga MX: the big stars shone