The voices of the worst night of repression of the protests in Colombia: “This is a hunt” 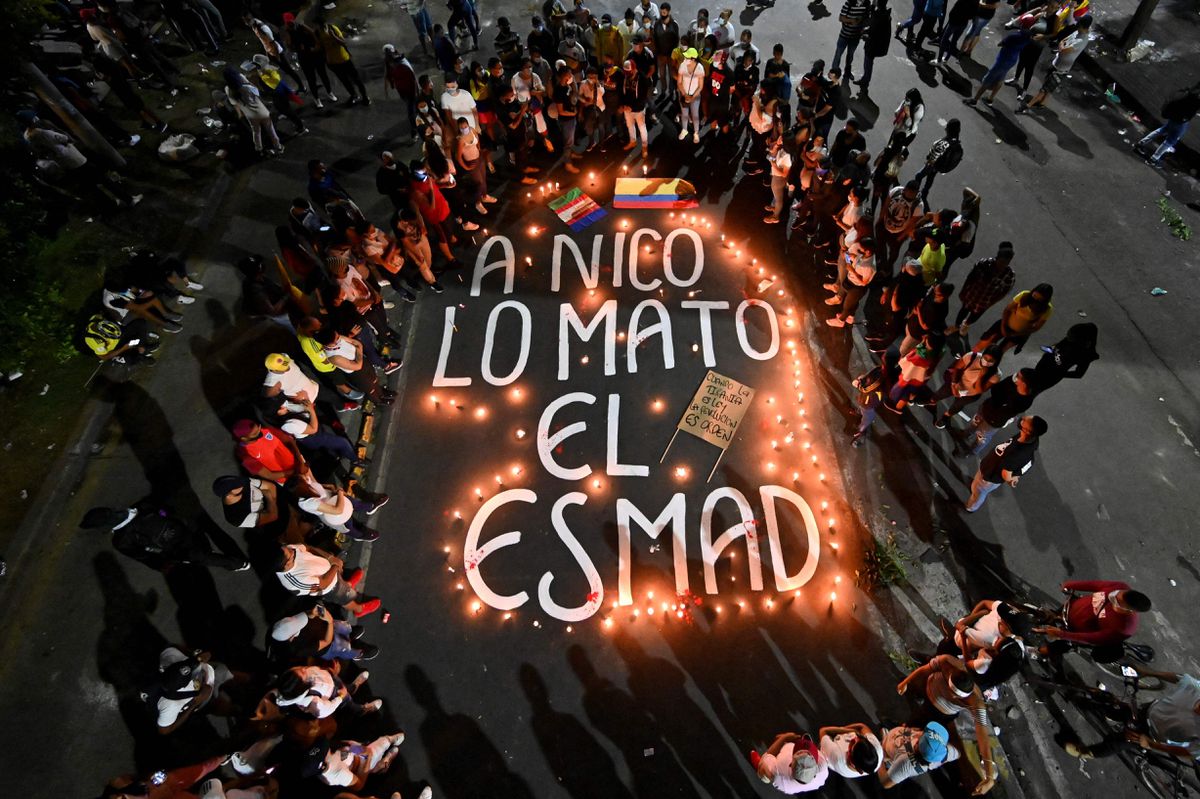 The night of May 3 will be remembered as one of the most painful of the protests against the Government in Colombia. “This is basically a hunt,” says Luna Giraldo Gallego, a university student in the city of Manizales, who has been documenting the police repression of her colleagues. “I have gone out every day to protest, since April 28, but nothing has been like last night.”

For just over a week, the repression of the police and the military in the streets has been randomly documented by citizens like Gallego, who with their mobiles denounce overflowing violence in the working-class neighborhoods of the largest capitals: Bogotá, Medellín, Manizales or Cali. The UN and the European Union have expressed concern about these abuses.

The city of Cali has been one in which the repression has been most violent. On April 28, a police officer murdered Marcelo Agredo Inchima, a 17-year-old sportsman who was part of the protests against the Government’s tax reform: after pushing a policeman on a motorcycle, the uniformed man shot him, and the corpse de Marcelo was held up by a few panicked passersby. Days later, on the night of May 2, the police shot Nicolás Guerrero, a 22-year-old artist who was recording clashes between protesters and authorities in the north of the city. “I heard the shots and, although I first thought that the police used rubber weapons, it was actually firearms,” ​​says Juan David Gómez, a lawyer who also filmed the protests. “It turns out that Nicolás gets hit in the head, the police turn off the street lights, and I was at a gas station that had light. The boy’s head was busted. He died at our feet, at the feet of 20 or 30 people who helped him, and we saw him dying. It is the first time I have seen a dead man before my eyes ”.

In Cali, every night cell phones are filled with confusing images of the new deaths from the police repression. On the night of May 3, it was the turn of Kevin Antoni Agudelo, 22, a university student. The boy attended a nightly event to put candles to the deceased, like Marcelo. “He died there, apparently, they shot him with a rifle,” says Luis, his father, to El PAÍS, about the police attack. “A man picked him up, with his girlfriend, and in desperation they mounted him on a motorcycle and took him to a hospital. But he had already died ”. Luis hopes that the Prosecutor’s Office will now make an uprising to be able to bury him, but he does not doubt that he will file a complaint against the police for murdering his eldest son.

“My other son is devastated here in the house because of what they did to his brother,” Luis says through tears. “They were making a candlelight peacefully, and if they protested it is their right, because they have the right to fight for a better country and not to close the door.”

On that same night of repression in Cali, several dozen policemen also attacked and fired their weapons at a group of human rights defenders – accompanied by UN officials – who were verifying the situation of people detained in a police station. Delegates from the Office of the United Nations High Commissioner for Human Rights and from the Attorney General’s Office, while, around 8:40 p.m., the defenders were waiting their turn to enter when the police began to reprimand them and throw them out of the place. Around a hundred officers left the scene to surround them. “They yelled at us that we were not doing anything,” says Ana María Burgos, of the Committee for Solidarity with Political Prisoners, and at that moment the first shots were fired into the air. “They surround us, they hit us, they throw me to the ground … I felt afraid, I feared for my life,” he says. “They were going to kill us,” he continues. “They say that we do not defend them.” There were shots “to the ground, to the air and to humanity of us, but we took shelter”.

The defenders were assisted by residents of the street who served as human shields and an agent helped them to flee the place. “I condemn the attack by the police against a civil society team that was verifying police abuses in Cali. The prosecution must bring those responsible to justice ”, declared José Miguel Vivanco, director for the Americas of Human Rights Watch, about the incident, which was also condemned by the UN. During the protests on Monday night in the city of Cali, at least five people died and another 33 were injured, according to the mayor, Jorge Iván Ospina.

The small Andean city of Manizales also experienced moments of terror. Luna Giraldo, the student who has documented the repression with her friends, says that on Wednesday night a large group of people held a peaceful sit-in in a plaza in the city. University of Manizales. “Around two in the afternoon, the police began to surround us,” says Giraldo. The protesters continued protesting –with songs, dances, banners– but around six in the afternoon they felt that the tension was beginning to rise: a group of “infiltrators” (as the students call undercover policemen) began hitting fences in the area and “ the police used that as an excuse to gas them, ”says Giraldo.

Surrounded by tear gas, in the midst of panic, the protesters ran towards the neighborhoods of Fatima and Palermo, pursued by the police, until one of the most confusing events of the night occurred: one of the gases from the authorities entered a bus of public transport, suffocating the citizens who were sitting there. “Normally the gases are thrown to the ground, but in this case the police were throwing them up, towards the people,” says Giraldo. “On that bus there were people of all ages, they began to drown, until the boys from the protests broke the windows of the bus so that the gas came out. When the police saw them breaking the glass, they yelled at them that they were hooligans ”. (Some people on the bus were taken to hospitals, and so far no deaths have been reported from that incident)

“The shots, deaths and injuries in Cali and other cities, which have been verified by the United Nations High Commissioner for Human Rights, are unacceptable and cause us deep pain. This barbarism has to stop ”, declared this morning the Jesuit priest Francisco de Roux, president of the Truth Commission arising from the peace agreement that this year will present its final report. “We invite you to continue in the peaceful mobilization for coexistence and social justice as the best way to honor his memory,” said Roux.

The dangers of famous tourist countries were revealed to the Russians