The virus again tarnishes the festival of Ramadan 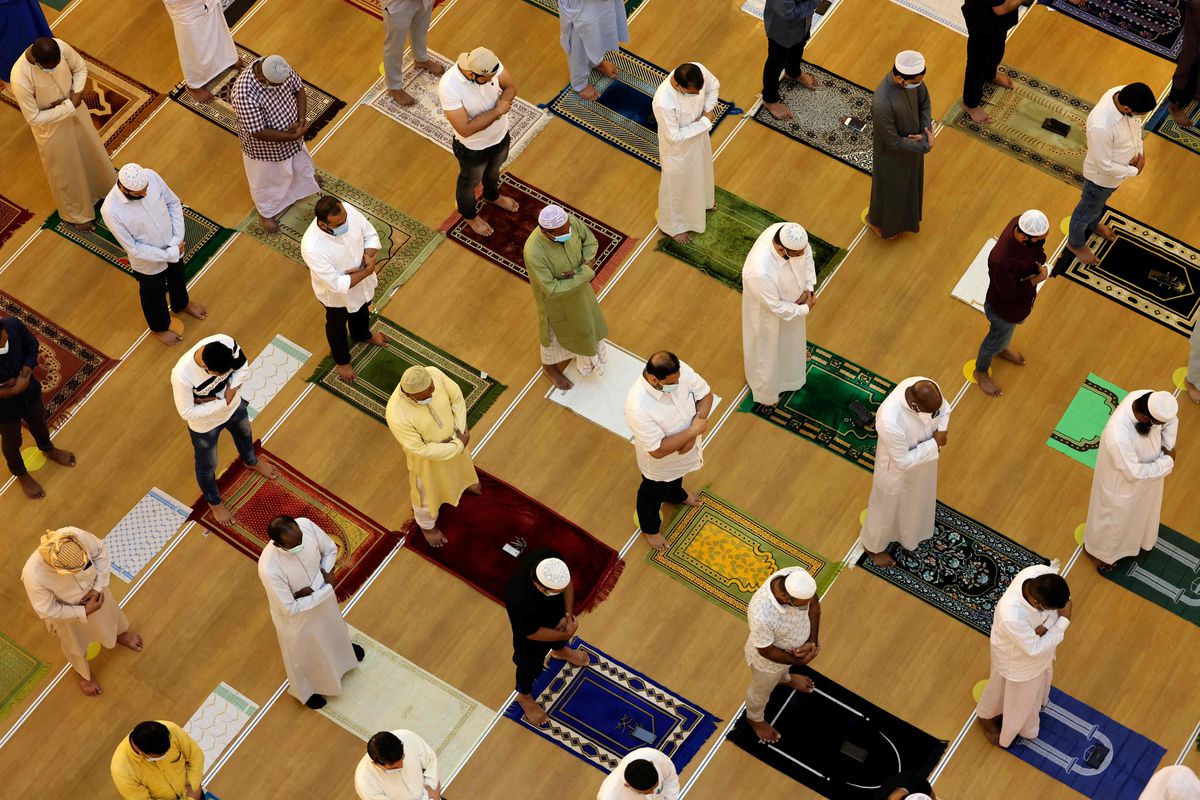 The almost 2 billion Muslims in the world, according to the Pew Research Center, celebrate Ramadan for the second year in a row under the effects of the pandemic. The month in which the Koran, the most sacred book for the followers of Islam, the most spiritual, the one with the greatest compassion for the poor, this year is accompanied by an increase in poverty unprecedented in recent decades.

Ramadan started in most Muslim countries last Tuesday. For 30 days the Muslim community maintains a fast that is usually broken in the evening. It constitutes a physical and spiritual exercise that makes the believer feel the needs suffered by the poor. At the time of the breaking of the fast – the iftar in Arabic– the streets are filled with people and the terraces with diners. The iftar it is usually maintained with family and social gatherings that exalt the celebration of life. But this month, in many countries, that joy will be diminished in the streets due to restrictions by the covid.

In Morocco, curfew to avoid massive influxes in mosques

The Government of Morocco has decreed a curfew from eight in the afternoon to six in the morning. This measure had already existed for several months, due to the virus. But, by introducing it at eight in the afternoon and not at nine, as before, the authorities avoid without even mentioning it the agglomerations that usually form in mosques on the occasion of the prayer known as tarawih, which is celebrated approximately one hour after the breaking of the fast.

The curfew measure during Ramadan has not been without controversy. On Thursday night there were clashes in Tangier between security forces and protesters demanding the celebration of the prayer of tarawih, in the neighborhood of Warda.

The editorial article of the weekly Telquel He accused the government, which is majority Islamist, of having sinned this time weakly. Because, according to him, the Executive has not dared to directly prohibit these massive gatherings in mosques. And it has, indirectly through curfew. As a result, restaurants are also affected. Most of them will not receive any income for the entire month. There are those who propose on social networks that when Ramadan ends, the waiters be left with tips equivalent to 30 days of drinking coffee. “Good economic sense has been sacrificed on the altar of religion,” the editorial notes.

In Egypt, open mosques and no curfew

The vaccination process in Egypt is slow and chaotic: barely 0.3% of the population has been vaccinated, according to the Health Ministry, compared to 11% in Morocco or 42% in the United Arab Emirates. And the calendar has wanted that during Ramadan the Easter of Coptic Christians is also celebrated and a third national holiday, Sham El Nessim, which marks the beginning of spring and which, like the season, is received with meetings on the air. free.

However, this year, health prevention measures are much more lax in Egypt than during Ramadan last year. The big difference is the absence of a curfew, which was set at nine o’clock a year ago. Now, believers can go to mosques to pray, and even to perform the night prayer of the tarawih. But it should be done –at least, on paper– with strict schedules, a mask, respecting distances and each one bringing their own carpet. Also, shopping centers, restaurants, cafes and hotels are open again; but, except for the last ones, the rest will have to close around midnight, following the schedules imposed by the Government in December.

What continues to be disallowed, however, are the popular fast-breaking charity banquets, especially aimed at those most in need, forcing charities across the country to strive, once again, to distribute boxes of staple food for children. make up for it. Nor can you organize the traditional sporting events and parties in clubs that animated the night until the suhur, the meal before dawn, nor the retreat of the most religious in the mosques on the last days of the month.

In Emirates you can eat inside the premises

In the United Arab Emirates, the second Ramadan under the pandemic has brought a novelty to Dubai. For the first time, restaurants and cafes in the emirate can serve food and drinks openly and without the need to obtain a special license. Until now, those establishments that wished to continue operating during fasting hours required authorization and were required to put up curtains or screens to hide diners.

The change, no doubt encouraged by the economic effects of the pandemic, does not extend to the terraces. After these functioned normally on Tuesday, a circular from the Government of the emirate has specified that the rule only applies to interiors. The prohibition of consuming in public, common in Islamic countries, forced the many non-Muslim workers (or non-practicing Muslims) and tourists to hide when they wanted to have a drink of water, something more than necessary with the high local temperatures.

There will be no sweets neither for Lebanese nor for Syrians

In both Syria and Lebanon, at this time, families used to queue outside pastry shops to buy baklawa, or other traditional Arab sweets, today sold in Beirut at prohibitive prices: the kilo can reach 150 euros at the official exchange rate. Now, the doors of the confectioneries are empty, and only people crowd in supermarkets that sell subsidized products. This Ramadan, as the Lebanese pound loses 85% of its value against the dollar, the daily fast becomes more severe and the traditional nightly gastronomic feast of the iftar, much less sweet.

The brutal economic crisis that plagues both Syria and Lebanon has emptied both the pockets of their citizens and the shelves of supermarkets. Unlike last year, the first in a pandemic that was marked by fear of the coronavirus and the withdrawal towards homes to avoid contagion, this begins marked by violent fights in food stores and aid distribution points.

A 23-year-old man died in Lebanon on Tuesday and two other men were wounded when a brawl broke out during a humanitarian aid distribution that ended in shooting. “It is a very sad Ramadan and one in which we are really feeling poverty,” says Hussein Ashaar, a father of two and a security guard in a downtown building in Beirut. “We made it to the end of the month thanks to the food boxes that the associations give us,” admits Ashaar.

55% of Lebanese have fallen below the poverty line, according to World Bank data, while in Syria 80% of the population has fallen after a decade of war, according to the UN. “Who is afraid of the coronavirus with everything we have seen and that of people who have died?” Reproaches Rana Chahban on the phone and from Damascus, a 35-year-old housewife with three minor children. Her husband, a state official, barely earns the equivalent of 10 euros a month. Impossible to bring meat to the table.

As in Lebanon, in Syria the citizens who wear the mask are a minority but, unlike in Lebanon, where the Lebanese health authorities have imposed a curfew as the numbers of positive cases skyrocket saturating hospitals, in Syria the The government has given in to popular pressure from a majority that survives by working hours.

Amman, ghost town at the beginning of the holy month

As for Jordan, after more than two months of escalating infections, life stops every day from seven in the afternoon, when the ban on leaving the house begins, until six in the morning the next day. On Fridays, the curfew lasts all day. Amman was a ghost town at night at the beginning of Ramadan, when the shock of the arrest of members of the royal family and former high-ranking officials for an alleged coup attempt still raged among its citizens. The strict restrictions – which are only lifted from Saturday to Thursday to be able to walk to a nearby mosque at dusk and dawn – will extend throughout the holy month.

The second Ramadan under the pandemic is experienced very differently in the Holy Land. While the 1.8 million Muslims of Israel (about a fifth of the population) and the 350,000 Palestinians of Jerusalem take to the streets again at night in the celebrations of the holy month of fasting, in the Palestinian territories of the West Bank and Gaza, the proliferation of infections has forced the imposition of a night curfew for its 5.5 million inhabitants, as in neighboring Jordan (10 million).

The streets of East Jerusalem, and in particular of the Old City – which houses the Esplanade of the Mosques, the third holiest place in Islam – have recovered the magic of festive illuminations and ceremonial lanterns, which the outbreak of the Covid- 19 went out in the spring of last year. The Al Aqsa Mosque and the iconic Dome of the Rock remained closed for more than two months at the time.

The Palestinians of the Holy City – integrated under the occupation into Israel’s health system, which has promoted an accelerated vaccination campaign to immunize more than half of the population – are meeting again in broad family clans in the iftar to break the fast at dusk in their homes. Or in restaurants and hotels, where they can access with a vaccination certificate.

In Palestine, as in most of the Middle East, vaccination has barely advanced. There are about 120,000 immunized in the West Bank so far, not counting as many Palestinian workers employed by Israelis, and fewer than 50,000 people inoculated in the Gaza Strip. On the first Friday of Ramadan, 10,000 vaccinated Muslims have received permission from the Israeli military authorities to travel from the West Bank to Jerusalem in order to pray on the Esplanade of the Mosques.

The rate of coronavirus infections has skyrocketed in Palestine in the weeks leading up to Ramadan, which begins marked by lockdowns and restrictions. The Palestinian Authority has imposed a curfew that is only eased on Saturdays in commerce and public services. On Friday the closure is total, although collective prayer is allowed in open spaces. The rest of the week you can pray in mosques, but with limited capacity and physical separation measures.

The Islamist movement Hamas, which rules de facto in Gaza, has also decreed a night curfew that will be in force throughout the holy month from 9 p.m. to 6 a.m. Restaurants and patisseries, which offer traditional dishes and sweets in Ramadan, can only provide home delivery service.

Interior has detained six jihadist captors in prisons since December