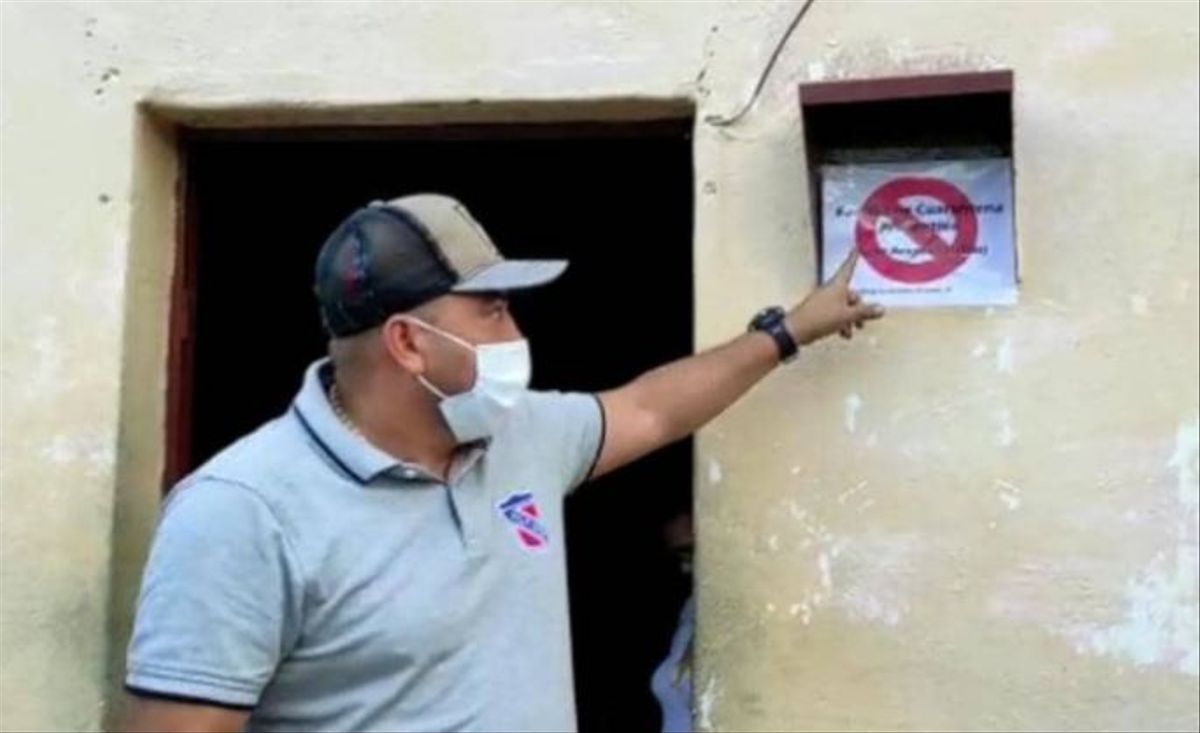 Adrián Duque, mayor of the ruling United Socialist Party of Venezuela (PSUV), in the Sucre municipality of Yaracuy State, in the west of the country, issued a provision this week that required to mark the dates of the homes of neighbors suffering from covid-19 to alert about a possible contagion. On a white poster, with a red circle and a diagonal veto line, the inscription stated: “Family in preventive quarantine, no visitors accepted.”

Duque published a video, accompanied by members of the municipal police, in which he invoked his obligation to protect the population. In a statement offered shortly after, the mayor warns, in a very strict tone, that those citizens who remove the official label, or fail to comply with the measure, face a fine of 20 million bolivars (about ten dollars). “And if they reoffend, we are going to make the video and we are going to suspend the bag of food and gas. If you do not comply with me, I hold contempt for authority, “said the councilor.

Duque’s video went viral very quickly and became a trend on social networks. “We are protecting our people. Here it indicates when we have a case of coronavirus or a suspected case. This is what it indicates, so that our people are alert, ”he said. The decision of the mayor was received with horror by the Venezuelan public opinion, and produced an immediate and unexpected reaction from Tarek William Saab, the attorney general of the Government of Nicolás Maduro, who announced a criminal investigation against Duque for marking “macabrely” the houses of infected patients.

The prosecution’s measure was announced by Saab himself on his personal Twitter account. The official commented that Duque’s procedure was carried out “unilaterally, and outside the policy of the Venezuelan State to combat the pandemic.” Saab added that prosecutors appointed by his office would travel to La Guama, capital of the Sucre municipality, together with members of the Ombudsman’s Office, to proceed to remove “the unusual notices selectively placed in the Yaracuy State.”

Duque’s decision – who, like other pro-government militants, resorts to rhetoric and behavior that tends to imitate Hugo Chávez himself – had been questioned with some diplomacy by some of his party colleagues on social media. The controversy surrounding the mayor takes place at a time when infections and deaths from covid-19 are worsening in Venezuela and anxiety in the population increases due to the very clear delay in the Maduro Administration in acquiring enough vaccines to start a massive immunization campaign.

The NGO Fundaredes condemned without nuances “the discriminatory actions and stigmatization of patients with covid” carried out by this mayor’s office. Opposition spokesmen and several civil activists called Duque’s announcement “fascist.”