The Venezuelan government and opposition are already negotiating in Mexico: what each party demands 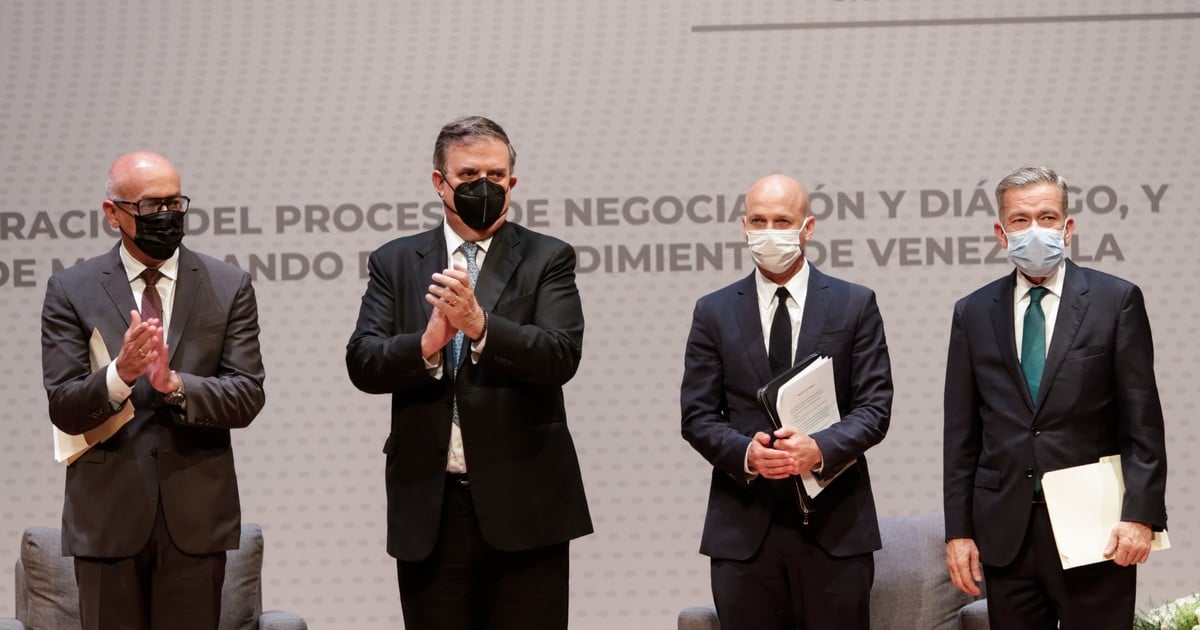 The parties have already taken the first step. The delegates of the Nicolás Maduro regime and the Venezuelan opposition leader Juan Guaidó managed to sign this Friday the historic Memorandum of Understanding at the Anthropological Museum of Mexico City, under the auspices of Norway.

The document seeks to materialize a comprehensive agreement that benefits all Venezuelans, including the 5.5 million who have migrated to other countries, given the deep crisis that the South American country has been experiencing for some time.

This Saturday, after the start of the dialogue between Chavismo and the opposition, The United States, the European Union and Canada announced that they are willing to “review sanctions policies” against Venezuela if the Maduro government “makes significant progress in the negotiations.”

In a joint statement released by the State Department in Washington, the diplomatic representatives of the United States, the EU and Canada welcomed the beginning of a new process of dialogue between the government and the opposition of Venezuela and reiterated their “willingness to review the policies of sanctions if the regime makes significant progress in the negotiations “announced on Friday.

The future comprehensive agreement establishes a whole but also partial agreements that will be included in the final text.

The document was signed by Jorge Jesús Rodríguez Gómez on behalf of the government of the Bolivarian Republic of Venezuela, Gerardo Blyde Pérez for the Unitary Platform of Venezuela and Dag Halvor Nylander of the Kingdom of Norway, before the Mexican Foreign Minister Marcelo Ebrard, who acted as a notary guarantor of the signatures.

The leader of the opposition delegation, Gerardo Blyde Perez, the Norwegian negotiator, Dag Nylander and the head of the Venezuelan Parliament, Jorge Rodriguez, in Mexico. Photo: AFP

On the other hand, the delegates of the ruling party did not offer the family photo of their delegation, whose members had been announced by President Maduro himself.

The Chavista representatives are Jorge Rodríguez, president of the Chavista National Assembly, his sister, Vice President Delcy Rodríguez, the governor of Miranda Héctor Rodríguez and Nicolás Maduro Guerra, ‘Nicolasito’, son of the president.

Shortly before the installation of the first round, the Chavista delegation starred a tense struggle for Carlo Vecchio to withdraw from the opposition delegation on behalf of Voluntad Popular – Guaidó’s party – threatening not to sit at the dialogue table.

But finally good sense triumphed and Vecchio continued in the opposition delegation.

Only Russia and France They were present at the installation at the beginning of the dialogue. The facilitator from the Kingdom of Norway announced that he will invite other nations to form the Group of Friends of the Process.

The first round could last between seven and ten days. Mexican President Andrés Manuel López Obrador predicted successes to the delegates, declaring to the press that the process could take about six months.

Nicolás Maduro Guerra, son of the president of Venezuela, participates in the dialogue with the opposition in Mexico. Photo: EFE

The Memorandum of Understanding

The document signed on Friday, at the end of the first day of negotiations, has 4 pages in which the parties are willing “to agree on the necessary conditions for the electoral processes enshrined in the Constitution, with all the guarantees, understanding the need for sanctions against the Venezuelan State to be lifted, claiming independence, freedom, sovereignty, immunity, territorial integrity and national self-determination as inalienable rights of the Nation ”.

They also reject “any form of political violence against Venezuela, its State and its institutions.”

They are also committed to “the stabilization and defense of the national, productive, diversified and supportive economy” and salute “the humanitarian initiatives taken, particularly the National Vaccination Table and the World Food Program.”

On the other hand, they recognize “the need to build a vision of a joint future for all Venezuelans and all Venezuelans, and inviting members of the international community to join us in these purposes.”

The document sets itself the goal of achieving “a comprehensive negotiation. The objective is to reach an agreement, through intense, comprehensive, incremental and peaceful negotiation, to establish clear rules of political and social coexistence, with absolute respect for the National Constitution, ”the text states.

The Memorandum of Understanding includes a series of points that the delegations will discuss in their meetings:

“1. Political rights for all.

2. Electoral guarantees for all. Election schedule for observable elections.

3. Lifting of sanctions. Restoration of rights to assets.

4. Respect for the Constitutional State of Law.

6. Protection of the national economy and social protection measures for the Venezuelan people.

7. Guarantees of implementation, monitoring and verification of what has been agreed ”.

How will the meetings be

Regarding the negotiation methodology, “it will take place under the principle that nothing is agreed until everything is agreed,” says the document.

“However, the parties may enter into partial agreements if they consider that the subject (s) on which they relate has been sufficiently discussed and if its implementation is urgent, necessary or, at least, verifiable before the end of the negotiation,” he adds.

Also “early partial agreements will be included in the final agreement and will be irreversible from their issuance, without prejudice to the possibility of adjusting them to the circumstances or improving them, taking into account, among others, the principle of progressivity.”