The Venezuela of Nicolás Maduro, the country that stopped eating meat 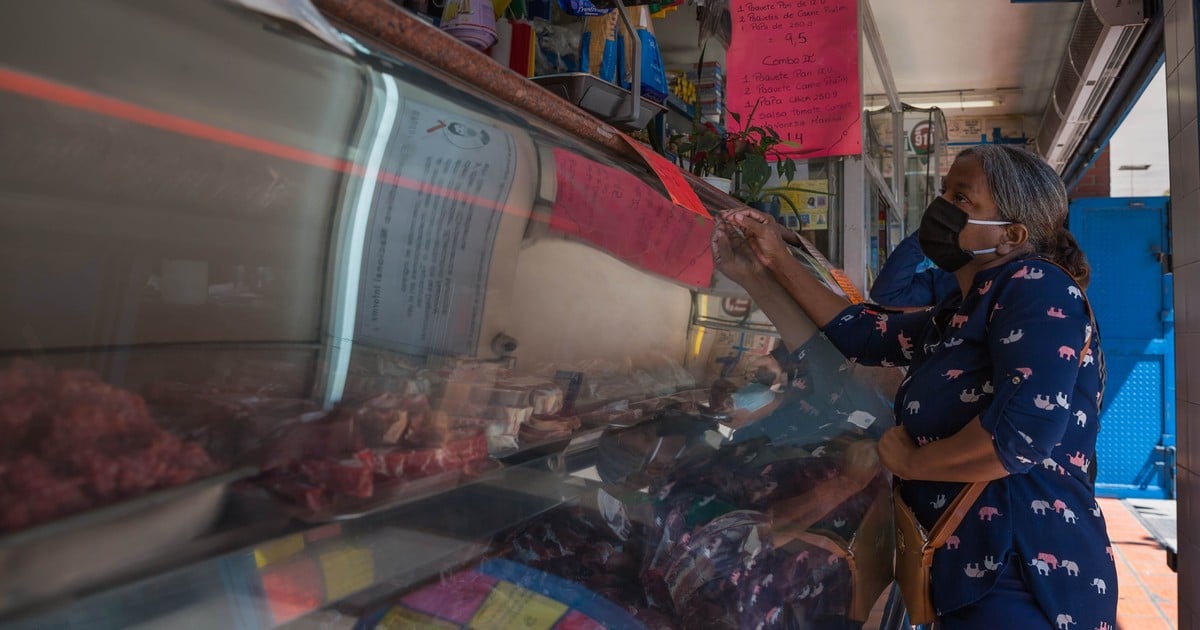 Disappointment is drawn on the face of the worker María Ponte when it comes out of a butcher shop in the Caracas favela of Petare, the largest and most problematic in Venezuela. He went there hoping that some phenomenon had thrown prices down, allowing him to eat meat for the first time this year.

But when leaving the store, where meat crammed the refrigerators, the woman only carries several kilos of chicken skin, with which he will make his own oil to fry eggs and arepas, a corn flour-based bun that is highly popular in Venezuela.

“I have not eaten a piece of meat for more than 3 months”, says Ponte a Efe. “It was a steak that my son and I ate. And we are just two people at home,” he adds.

At another point in Petare, the pensioner Encarnación Almarza has better luck and buy several kilos of meat.

But later he clarifies to Efe that they are not for his house, but you will use it to prepare the filled cakes He sells each day to round off his income.

That is, he will cook and sell the meat, but he will not taste it, although he points out that he eats every day, even if it is more accessible food, something that not all the inhabitants of this poor neighborhood can say, in which the problems of the South American country find showcase.

Cases like that of Ponte and Almarza are repeated more and more in Venezuela, a country that is going through the worst crisis in its modern history.

And it is that Venezuelans are stopping consuming meat, but not because of scarcity or high prices, but because of the poor purchasing power of the workers, as the president of the National Federation of Cattlemen (Fedenaga), Armando Chacín, points out to Efe.

“Venezuelan meat is the cheapest in Latin America and in many countries in the world,” says Chacín in a telephone interview with Efe. “But there is an issue of low purchasing power that has lowered the protein consumption of Venezuelans, “he adds.

In Venezuela, the minimum wage is 1,800,000 bolivars, which equate to just under a dollar, according to the official exchange rate of the Central Bank.

A woman buys meat at a butcher shop. Photo EFE

About seven million people between public employees and pensioners receive this income, although the Government of the socialist Nicolás Maduro ensures that this group also receives more money through various social assistance plans.

In any case, pensioners and public employees consulted by Efe assure that their income does not exceed, in the best of cases, 10 dollars per month, while the kilo of meat is obtained between 4 and 6 units of the American currency, a price that could be considered cheap in other countries, but not in Venezuela.

“At Fedenaga we understand that today no capacity to consume the slaughter that we are producing in the country, although it is low, “continues Chacín.

The manager points out that Venezuela’s livestock production barely covers the 40% of the requirements according to the size of the population, estimated at about 30 million people.

However, more than scarce, meat is left over in Venezuelan supermarkets.

“The great drama of the Venezuelan citizen is that he has the cheapest meat in Latin America, but he cannot eat it. He does not have the power to buy it,” says Chacín.

A worker in a butcher shop in Caracas (Venezuela). Photo EFE

As a consequence, many have started to vary their diets. leaving out the meats, a product from which historically they got the iron that the body needs.

This panorama has prompted Venezuelan ranchers to request the Executive to approve permits to export cattle that are ready to be slaughtered.

Although Chacín recognizes that exports in the sector require more than the authorization of the Government of Nicolás Maduro, in view of the fact that the country does not have the vaccination certification against foot-and-mouth disease.

“If we begin to vaccinate cattle today, in four years we could be exporting. As you can see, with respect to the countries of the region, we are at a disadvantage,” he says.

In pictures: a year ago confinement came to the lives of the French

The fate of the zoo shooter from Mytishchi became known